Geelong players and fans partied into the night after claiming their 10th flag in a dominant one-sided AFL Grand Final – while devastated Sydney supporters had a much more subdued evening.

The Cats were on fire from the start of Sunday’s final with a stunning 41-6 opening quarter before going on to register a whopping 133-52 victory.

In the evening, the victorious Geelong stars joined up with ecstatic fans at Yarra Park in Melbourne with the city lit up in blue and white as wild celebrations erupted. 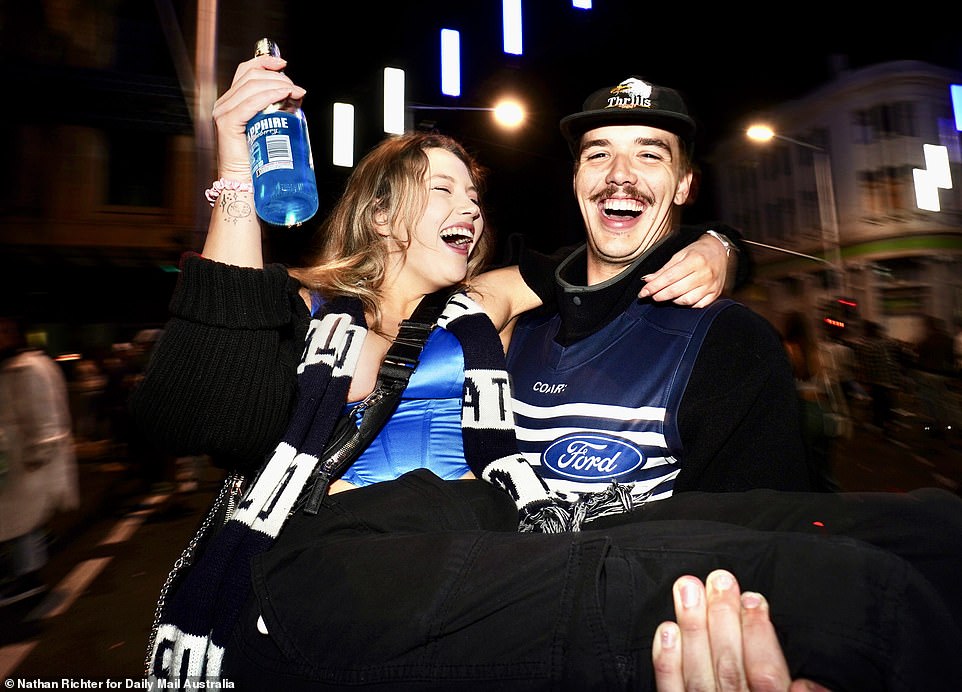 Geelong Mayor, Peter Murrihy took to Twitter to say, ‘What a purr-fect day in Geelong’. A ‘Go Cats’ projection shining at City Hall in Geelong.

And while mounted police were called in to the centre of Geelong to keep the raucous crowd under control, Swans fans were nowhere to be seen at their favourite haunts in Sydney.

Under lights and led by Cats star Jeremy Cameron the players were met with deafening cheers in Melbourne’s Yarra Park.

Across the bay huge crowds of Cats supporters swept the streets of their city and filled pubs to celebrate their historic win.

The raucous atmosphere in Geelong was a stark contrast to Sydney, where unhappy fans trudged through the city’s almost deserted streets on a chilly and rainy night.

Geelong Mayor, Peter Murrihy took to Twitter to say, ‘What a purr-fect day in Geelong’.

While a ‘Go Cats’ projection shone at City Hall in Geelong.

Various parts along the Waterfront and Customs House were also decorated in Geelong colours.

Swans fans were nowhere to be seen at their favorite haunts in Sydney, such as the Coogee Bay Hotel in the city’s east

The thrashing appeared to leave Sydney fans in a somber mood, with many pictured embracing and comforting each other

Most supporters in Sydney ended up calling it an early night, with the gloomy weather conditions matching their mood.

Some enjoyed a late night kebab, though they appeared despondent as they trudged through the mostly deserted streets.

Earlier, coach John Longmire said Sydney had ‘buggered’ everything up in their nightmare AFL grand final.

Longmire admitted picking veteran forward Sam Reid was a mistake and said his players were mentally and physically overawed in a defeat that will be hard to digest.

Sydney punted – and lost – on Reid’s fitness, with the 30-year-old battling a groin injury suffered in the preliminary final.

The key forward was substituted out of the grand final early in the third term after hobbling off late in the second quarter after having just four handballs.

‘We were obviously confident, that is why we picked him,’ Longmire said.

‘But we made a mistake.’

‘From the first bounce, the game looked as foreign as what we have played it this year,’ he added.

‘There was no element that we got right.

‘No aspect of the game looked like the way we wanted to play it … from the selection of Sam to the way the game looked, we just didn’t get it right.’

Asked if his team was overwhelmed by the occasion, Longmire replied, ‘That is what it looked like’.

‘We just didn’t have our heads in the game from the very start.

‘Just been bashing away. We don’t apologise to being up there, having a crack at it each year. So many, please get around all of them. They all have great stories.’

Joel Selwood, captain of the Cats, and wife Brit celebrate after winning the 2022 Toyota AFL Grand Final on Saturday

Jeremy Cameron, Brad Close and Joel Selwood of the Cats celebrate with the premiership cup after their team’s win

The final got off to a scintillating start as Robbie Williams’ pre-game performance garnered rave reviews.

Williams spine-tingling setlist included all of his biggest hits, as well as a cover of John Farnham’s The Voice.

He also paid tribute to Shane Warne as the cricket legend’s children sat in the MCG stand now bearing his name.

He was later joined by Delta Goodrem for a duet of his song Kids.

One viewer wrote: ‘Best pregame I’ve seen. Robbie is built for that setting. Great start to the day.’

‘Robbie and Delta singing together was best entertainment to date,’ commented another.

Viewers however didn’t react so well to the half-time entertainment. The most diverse and progressive halftime show in AFL Grand Final history was savaged by viewers as ‘worse than Meatloaf’s’ disastrous 2011 performance.

Australia’s First Nation performers were given the spotlight at the halftime show at the AFL Grand Final in Melbourne on Saturday, but some disgruntled viewers called it a ‘woke’ move designed to ‘tick boxes’.

While Aussie rock band Goanna led the performance with their 1982 hit Solid Rock, they were joined by Indigenous artists including Christine Anu, Emma Donovan, Tasman Keith and William Barton.

G Flip opened the performance with a roaring drum solo, before later coming back in to belt out Jet’s Are You Gonna Be My Girl.

Christine Anu and Emma Donovan were then introduced with an incredible didgeridoo solo, which bled into Goanna’s Solid Rock.

While many viewers were no doubt happy to see underrepresented minority groups being given center stage, others called it ‘woke’ and said the vocals weren’t up to scratch.

‘That halftime show was pretty bad, felt like they were trying to be woke. Was it just me?’ complained one.

‘Dreadful halftime show at the @AFL grand final. More about ticking boxes then entertainment! We get lectured to everyday bit over it coming into sport,’ tweeted another.