Three followers of an alleged cult leader have been charged with two separate murders in Alabama.

In January, Damien Winslow Washam, 24, was accused of killing his mother with a sword and injuring his disabled uncle and brother.

Krystal Diane Pinkins, 36, and Yasmine Hider, 20, have been accused of murdering 22-year-old Adam Simjee of Apopka, Fla. as he tried to help them with their car.

The three are said to be followers of Rashad Jamal White — known to his followers as Rashad Jamal — who runs the University of Cosmic Intelligence cult, which preaches to African Americans and Latinos and believes they are natural earthly beings, not white people, according to Fox News .

He recently claimed that he and blacks and latinos are “gods.”

Jamal is also currently jailed on allegations of child abuse and child cruelty. 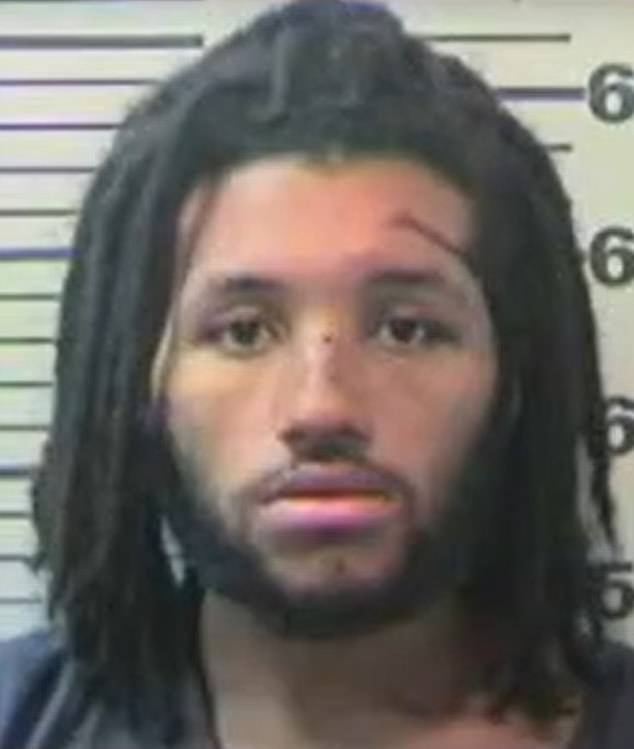 Damien Winslow Washam, 24, has been accused of killing his mother with a sword and injuring his disabled uncle and brother

Krystal Diane Pinkins, 36 (left) and Yasmine Hider, 20, (right) have been accused of murdering 22-year-old Adam Simjee of Apopka, Fla. as he tried to help them with their car.

Washam led police in a chase after fleeing the home where he allegedly stabbed his mother. Mobile County captain Paul Burch said he has “no regrets at all.”

The sword was found in his car.

Washman’s father, Hubert, told Vice’s Motherboard that his son used to play a lot of video games — he learned about the “cult” through a Call of Duty chat — and was a regular person before he came to Jamal’s preaching.

He had reportedly learned about the University of Cosmic Intelligence through a Call of Duty chat and soon became obsessed with harvesting energy from the sun, Fox News reported.

He listened to these kinds of conspiracy videos and it was fucking stupid,” his father told Motherboard. “It was stupid. I’ve tried watching some of these videos but I can’t even listen to them it’s so stupid. Lizardmen and Aliens.”

After he started watching Jamal’s video, he reportedly started doing crazy things and went back to smoking marijuana and selling his PlayStation. He also became possessed by Egyptian gods and the underworld and began buying edged weapons.

His father later found out he had bought thousands of dollars worth of a weapon, the sword he used to kill his mother, and crystals from the University of Cosmic Intelligence store.

All three had ties to the head of the University of Cosmic Intelligence, Rashad Jamal White – who names his followers Rashad Jamal. He is currently in custody on charges of child molestation and child cruelty, which he denies

He recently claimed that blacks and Latinos are “gods.” His alleged three followers interacted with his sermon before their crimes

“He was acting strange. He got really weird,” his father told Motherboard. “And it didn’t seem like it, you know – it was weird, but it didn’t feel like a mental illness to us. It was more like – I don’t know. I don’t know how to explain it.”

Pinkins and Hitler were charged with murder eight months later.

In the months leading up to the attack on Simjee, who was a college student, Pinkins reportedly wrote a letter to the Borrow County judge in Jamal’s case, in which he maintained his innocence and was one of the most vocal supporters. According to Motherboard, she reportedly lived with him and his wife for several months.

Hider had been tagged in a photo with Pinkins, a real estate agent, and had reportedly shared Jamal’s posts on social media.

On August 14, Simjee and his girlfriend Mikayla Paulus, 20, were driving near Cheaha State Park when they stopped to help Hitler, who was having trouble with his car.

After trying to fix the problem for about 30 minutes, Hitler reportedly attempted to rob the couple at gunpoint while Pinkins hid in the woods.

Hitler shot Simjee, who then pulled out his own gun and fired, but later succumbed to his injuries.

Pinkins then allegedly fled to an off-grid community, where police found her five-year-old son wielding a shotgun.

Due to an August 17 gag order, not much information is known about the case.

Simjee and his girlfriend (pictured together) had stopped to help Hider with their car, the car broke down when she tried to rob them at gunpoint and Simjee died from injuries

In a recent phone call to prison, Jamal claimed he was a “god” and maintained his innocence.

“I am a god and all my people, black and latino, are gods,” he was heard saying.

“And we were created in the image of our Creator. Therefore, I am an extension of her/them and I am the creator and destroyer of my reality, so I take full responsibility for all events that I have experienced in this life, for this is what we call shadow work in the spiritual realm .’

A video of the phone posted to YouTube urges his followers to send money and write to the judge to call for his release.

https://www.dailymail.co.uk/news/article-11176619/3-cult-members-accused-2-separate-murders-Alabama-connected-cult-leader.html?ns_mchannel=rss&ns_campaign=1490&ito=1490 3 “cult” members accused of two separate murders in Alabama after being linked to a “cult leader”.

Larry Emdur describes sitting by Grant Denyer's side in the hospital