A horrified British tourist filmed the moment a ‘hero’ visiting Australia Zoo caught a hunting spider hiding under her seat.

Stephanie Cara shared the video on Monday after driving to Queensland’s famous zoo to watch the crocodile show.

“This is crazy, a huntsman spider was right under my seat while we were waiting for the show,” she said. 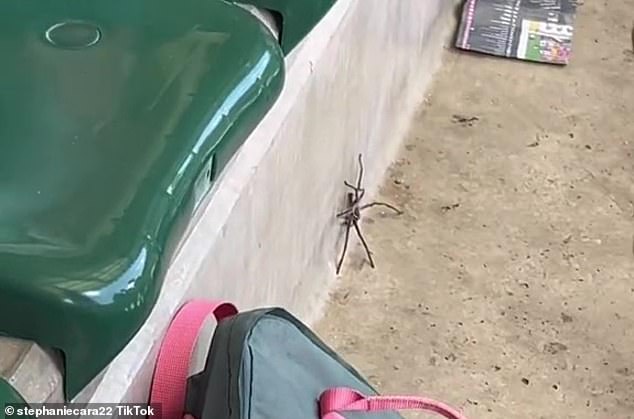 Huntsmans are large spiders, averaging around 12cm across, that like to hide in small, dark places and can be found throughout Australia.

While the spider is venomous, hunters are usually very shy and its bite has only a mild effect.

A man sitting next to her jumped to the rescue and tried to capture the baby spider, armed with a zoo map and a paper cup.

He began following the spider moving between the seats while terrified onlookers looked on.

“Get someone from the zoo,” Mrs. Cara called out to him.

Only seconds later it looked like the man had caught the spider, but it managed to run up the cup and escape as the crowd around him screamed.

However, the man was determined and a short time later managed to catch the spider.

A crowd gathered when a man sitting near Ms. Cara caught the spider between a zoo map and a paper cup (above).

Commenters wrote Ms Cara (above) overreacted to the spider, while hundreds more wrote they ran away

“You are so brave, well done!” exclaimed Ms. Cara as the crowd cheered and applauded.

However, several Aussies in the comments said the whole saga was “hilarious” and accused the tourists of overreacting.

“He wanted to see the show,” joked one commenter.

“I don’t understand how people get so scared of spiders,” said another.

But hundreds more commenters said they would have been even more scared if the big spider had crawled out of its perch.

“Omg I would run and never stop running! This is absolute horror to me,” said one.

“And that’s why Australia isn’t on my list of places to visit,” wrote another person.

“I almost threw my phone when he dropped the spider,” commented a third.

A fourth said: “I would marry any man who would do this for me in a heartbeat.”

https://www.dailymail.co.uk/news/article-11634035/British-tourist-huntsman-spider-seat-Australia-Zoo-crocodile-show.html?ns_mchannel=rss&ns_campaign=1490&ito=1490 A British tourist found a spider spider under her seat before the crocodile show at Australia Zoo