Disgusting footage has surfaced of a bull howling in fright while it is tied to a post with a rope while its captors attach flaming torches to its horns during a bull running festival in Spain.

The harrowing clip, recorded on August 18 in the municipality of Museros, Valencia, shows the moment the bull is lashed to a post while the event organizers forced a flammable device onto its horns.

The attendants light the torches, causing the animal to groan in fear and anger, before releasing the animal and running through the streets to goad festival-goers.

The images were released yesterday by Spain’s PACMA (Animalist Party Against Mistreatment of Animals), which is campaigning to end the country’s widely celebrated but brutal practice.

A bull with flaming horns is known as a ‘toro embolado’ – or ‘bull with balls’ – and is a sight that can be seen at bull running events in many Spanish cities.

Locals try to avoid the bull as it rushes through the city streets, but the pain caused by the flames usually drives the animal into a frenzy, making it even more dangerous. 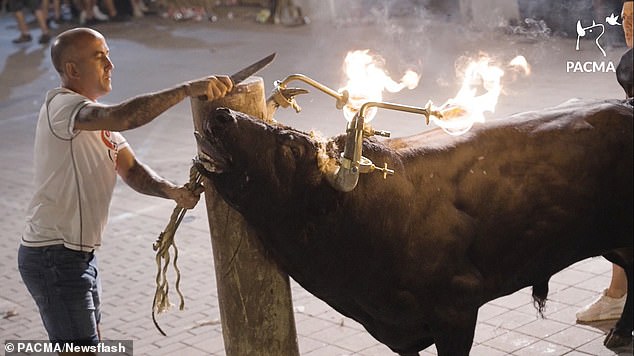 The image shows a man with a knife next to a bull with burning horns tied to a pole, in Museros, Spain. The Spanish political party PACMA condemned the bullfight where this happened as cruelty to animals

Wardens light the torches and attach them to the bull’s horns, causing him to grunt and groan in fear

A PACMA spokesman said: “The PACMA Animalist Party shared a video that may offend the sensibilities of many, but not because of physical violence but because of a bull’s screams of fear.

“The images show it being met as it exits its enclosure by several dozen men who, screaming quickly, surround it and even pounce on it to anchor it to the post where the devices will be attached to its horns.”

They said it was a “situation that cattle experience with great sensitivity” which, according to veterinary reports documenting similar incidents, amounts to “real torture”.

The political party said bulls are tortured at over 17,000 events held across Spain each year, stressing that Valencia has the highest number.

They said that in Valencia there are over 300 communities celebrating these types of events and that so far this year seven people have died as a result of taking part.

They added that this was the worst year on record in terms of human deaths tied to 2015.

PACMA’s goal is “to bring to light what bullfighting enthusiasts and businessmen prefer to keep hidden: the crudest side of bullfighting and bullfighting.”

The party claims the practice “distorts” Spanish culture and “brings out the worst in people”.

They are planning a protest in the capital Madrid in September to demand a ban on bullfighting in Spain, and claim a petition supporting a ban has already garnered over 60,000 signatures.

The political party said bulls are tortured at over 17,000 events held across Spain each year, stressing that Valencia has the highest number

Participants in the event surround a bull tied to a stake in Museros, Spain, August 18

Footage of the disturbing incident was released just days after a flaming bull speared a young man to death in a nearby community in Valencia.

Shocking footage showed 24-year-old Adrian Martinez Fernandez being crushed by an angry animal in the city of Vallada on Sunday, August 21.

The animal, whose horns had been lit for the festival, turned Fernandez over and then impaled him as terrified festival-goers, standing yards away but protected by railings, looked on in disbelief.

The 24-year-old, who had traveled from Almansa to the celebrations, was taken to the hospital by ambulance as a precaution with no immediately visible injuries.

But the attack had ruptured his spleen and caused several other internal injuries, leaving medical staff with no hope of saving his life.

The city council later suspended bullfighting night, which was scheduled to take place later that day, as well as another even scheduled for Monday morning, because of the young man’s death.

Shocking footage shows 24-year-old Adrian Martinez Fernandez being crushed by the enraged, flaming beast in the city of Vallada, in Valencia, Spain

The attack ruptured the young man’s spleen and caused several other internal injuries, leaving medical staff with no hope of saving his life

Instead, a minute’s silence was held in the city’s plaza to honor Fernandez after locals received news that he had died.

The city also sent its support, expressing “regrets and solidarity” to the 24-year-old’s family and friends.

After two years of the COVID-19 pandemic, locals had reportedly welcomed the festival’s long-awaited return.

But several people have died in bull races across Spain this year and dozens have sustained injuries as eager festival-goers were surprised by the return of the controversial practice from the pandemic.

https://www.dailymail.co.uk/news/article-11164357/Terrified-bull-tied-flaming-torches-attached-horns-Spanish-festival.html?ns_mchannel=rss&ns_campaign=1490&ito=1490 A frightened bull is tied up at the Spanish festival while torches are attached to its horns