By Paul Farrell for Dailymail.Com

In another close encounter at JFK, a JetBlue flight bound for Puerto Rico ran into an empty plane on the tarmac at New York Airport around 7 a.m. Wednesday morning.

The incident comes just days after hundreds of lives were nearly lost at the airport when a Delta Boeing 737 and an American Airlines Boeing 777 narrowly avoided a collision while the Delta plane was taking off.

This incident is being further investigated by numerous federal agencies.

According to a passenger on board the JetBlue flight, during Wednesday’s incident, the plane was being pushed away from the gate by a pushback truck and preparing to taxi before takeoff.

After the incident, the plane returned to the gate and no injuries were reported. The airline said both planes had been taken out of service. 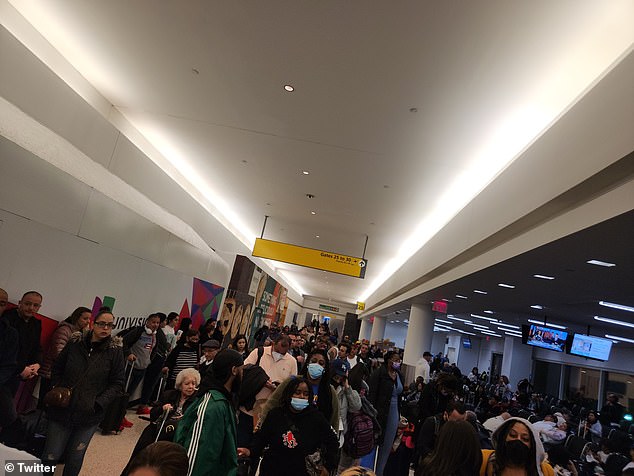 There were no reported injuries as a result of the collision

In a statement, a JetBlue spokesman said the flight to San Juan “made light contact with a parked unmanned aircraft during pushback.”

The incident is being investigated by the FAA. The agency said in a statement, “JetBlue Flight 1603 struck the tail of a parked JetBlue aircraft while being backed away from the gate at about 7 a.m. at John F. Kennedy International Airport in New York.”

“The flight departed from Luis Muñoz Marin International Airport in San Juan, Puerto Rico. Both aircraft were Airbus 320s. No injuries were reported and the FAA will investigate.’

The flight was scheduled to depart at 6:00 a.m. and passengers finally disembarked on a new plane at 7:50 a.m.

In a statement to DailyMail.com, a JetBlue spokesman said: “Safety is JetBlue’s top priority and both aircraft involved are being taken out of service for inspection and the incident is being investigated.”

The January 2 near miss was avoided thanks to a sophisticated radar system on the ground – the Airport Surface Detection Equipment, Model X. The system collects data from censors to warn the tower of potential collisions.

A week earlier, the Allied Pilots Association, which represents 15,000 American Airlines pilots, raised concerns about new cockpit protocols being enforced by the airline without proper training. These procedures may become part of the FAA and TSA investigation into the incident.

The new controls have been in effect since Tuesday 11 January. According to the union, the procedures deal with communication in the cockpit during critical events such as landings in poor visibility.

“The operational changes that management is trying to implement without extensive training are transforming how pilots communicate, coordinate and execute flight safety duties during some of the most dangerous times of flight,” the Allied Pilots Association (APA) said in a post last Monday.

An incident similar to Wednesday’s occurred Jan. 2 at JFK when an ITA Airways plane touched a Delta plane on landing in New York from Rome.

No one was injured, an ITA spokesman said, adding the passengers were not aware of the impact.

https://www.dailymail.co.uk/news/article-11648981/JetBlue-flight-crashes-parked-plane-JFK-leaving-terminal.html?ns_mchannel=rss&ns_campaign=1490&ito=1490 A JetBlue flight crashes into an empty parked plane at JFK while exiting the terminal

Ex-Man United star looks unrecognizable... so can you guess who the Old Trafford legend is?