A Turkish fan storms the pitch and FLY TICKS a Besiktas player, with Everton flop Cenk Tosun caught in the crossfire – while two players are sent off as ugly scenes disrupt their fiery victory in Ankaragucu

Besiktas midfielder Salih Ucan was brutally hit with a dropkick by a fan who stormed onto the pitch during the Turkish giants’ 3-2 win in Ankaragucu.

The incident came as tempers were already spilling over as Besiktas and Ankaragucu players were arguing in the center of the pitch.

The referee tried to calm the situation but as he tried to do so a supporter jumped over the barriers and sprinted onto the field before kicking off the fly Ucan who had his back turned. 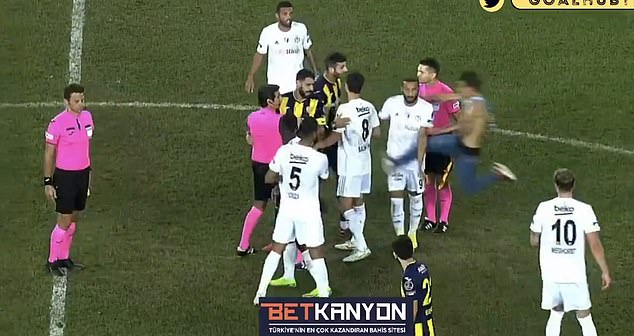 The fan managed to kick Ucan’s butt before the Pitch Invasor was knocked to the ground by Josef de Souza – one of two players sent off in the game – sparking an even bigger hand-to-hand fight.

The fan was eventually thrown to the ground by Besiktas players and stewards after his escape attempts were thwarted, with Everton’s flop Cenk Tosun also caught in the crossfire.

Others then rushed onto the field as the scenes at the Eryaman Stadyumu went haywire.

Dutch striker Wout Weghorst – on loan to Besiktas from Burnley – was also involved in the melee and was seen pointing his head as he moved away from the eye of the storm.

But a coach didn’t seem happy with the 30-year-old and confronted him, only for one of Weghorst’s team-mates to step in and end their scuffle.

Ankaragucu’s Marlon Xavier was the other player sent off as ugly scenes marred a five-goal thriller.

Everton midfielder Dele Alli struck in his second game for Besiktas and scored his second goal in the 3-2 win.

The 26-year-old drifted into the box and landed at the end of a header from Burnley loanee Weghorst, resulting in a decent first finish.

The goal was his first in the league in 378 days and fans of the Turkish team are hoping it will be the first of many.

Besiktas remain at the top of Turkey’s Super Lig, two points ahead of Konyaspor.

https://www.dailymail.co.uk/sport/football/article-11180609/Turkish-fan-storms-pitch-FLY-KICKS-Besiktas-player-Tosun-caught-crossfire.html?ns_mchannel=rss&ns_campaign=1490&ito=1490 A Turkish fan storms the field and FLY TICKS a Besiktas player while Tosun gets caught in the crossfire

How to complete the Player Moments objective