Aaron Rodgers, 41, admits he’s been taking ayahuasca AGAIN this summer and reveals he’s only enjoyed playing football since taking Amazonian psychedelic drugs in 2020 — despite playing 18 years in the NFL and the won the Super Bowl

NFL superstar and Green Bay Packers legend Aaron Rodgers has admitted for the first time that he took the psychedelic drug ayahuasca again this offseason.

Rodgers caused a worldwide sensation earlier this summer when he credited his back-to-back MVP awards to the effects of the Amazonian psychedelic drug, which he first ingested on a trip to Peru in 2020.

Now, the quarterback has admitted he’s tried his hand at ayahuasca again this year, even insisting his only interest in playing soccer has been since using the hallucinogen. 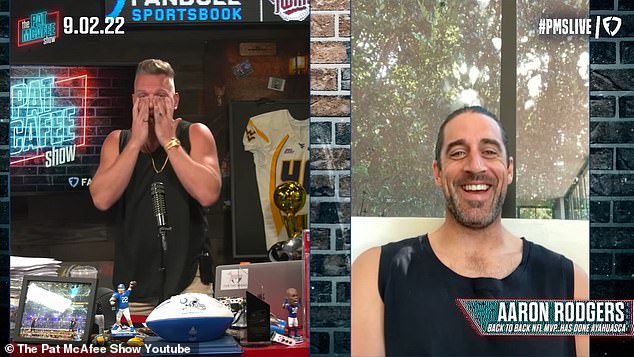 “For me, it just came down to me and a best high school friend playing a round of golf and talking about his recent ayahuasca experiences,” Rodgers explained on The Pat McAfee Show. “Jordan, he inspired me to do this because I was looking for a deeper level of self-love.

“I went down to Machu Picchu in Peru and had magical experiences in the Sacred Valley. I had some really interesting nights with the medicine and came back a changed person.

“I wanted to open myself up to doing it again in a different environment, in a different place, with a different group. I did it again this offseason and had an absolutely beautiful experience. This time we sat there more nights, the first time two, the second time three.

Ayahuasca is a hallucinogenic drink that is illegal in the UK and US but widely consumed by tribal societies in the Amazon Basin.

Shamans consider ayahuasca a “wisdom plant” that allows entry into the spiritual world, and it was recognized as such by the Peruvian government in 2008.

According to Talk to Frank, it can produce hallucinations similar to the effects of LSD or magic mushrooms. They last two hours and are “usually enjoyable” but can cause panic and horrifying flashbacks, the site says.

The negative emotional effects of taking ayahuasca can last for days, making it particularly dangerous for those with mental health issues.

It can also increase blood pressure and heart rate and harm people with pre-existing heart disease.

“I had a really difficult night one, a beautiful night two and then a mixed night three with a really nice conclusion to the ceremony. It changes the way you look at the world… You may feel more connected.

Incredibly, Rodgers – who is approaching his 18th season in the NFL – then admitted that he only enjoys playing football since he started using the drug.

When asked if he enjoys the sport now, he replied, “I’ve been enjoying it since I’ve been doing ayahuasca…the last few years have been amazing.

“Mental health, brother, begins with self-love. If you increase that, you can pass that on more easily.

“I can honestly say to my critics and haters, I’m not bitter towards you, I have nothing but love and appreciation for where you are at in your life and all the different emotions that affect our personality and our decision-making and our belief system on a daily basis.

“It allows me to have a better relationship with my coaches, with my teammates, with my close friends and family. And the most important thing is that it is not selfish, but to relate to myself.

“All the projections I place on myself to truly shed and find a deep and transformative self-love for all I am and all I am not.”

The Packers and Rodgers take on the Minnesota Vikings in the first week of the season next Sunday.

How people in their 90s REALLY spend their days