Activists are opposed to a sweeping policy change affecting children in Southwest Iowa Catholic schools that prohibits them from using their preferred pronouns and bathrooms that contradict their biological sex.

The Des Moines Diocese of Des Moines’ seven new ordinances went into effect Monday and all revolve around how the religious organization handles gender identity in 17 schools and 80 parishes across the state.

A sect of the Catholic Church created the diocese official document outlining the new rules – which includes a requirement that students who play sports only play in teams that match their sex at birth.

Other rules to be enforced include that if the school has a dress code, students must follow it based on their biological sex, along with a strict ban on gender blockers on the school grounds.

The final rule insists that students who question their gender be taken to clergymen within the church for advice – and progressives like state Senator Claire Celsi are already slamming the provisions as unchristian. 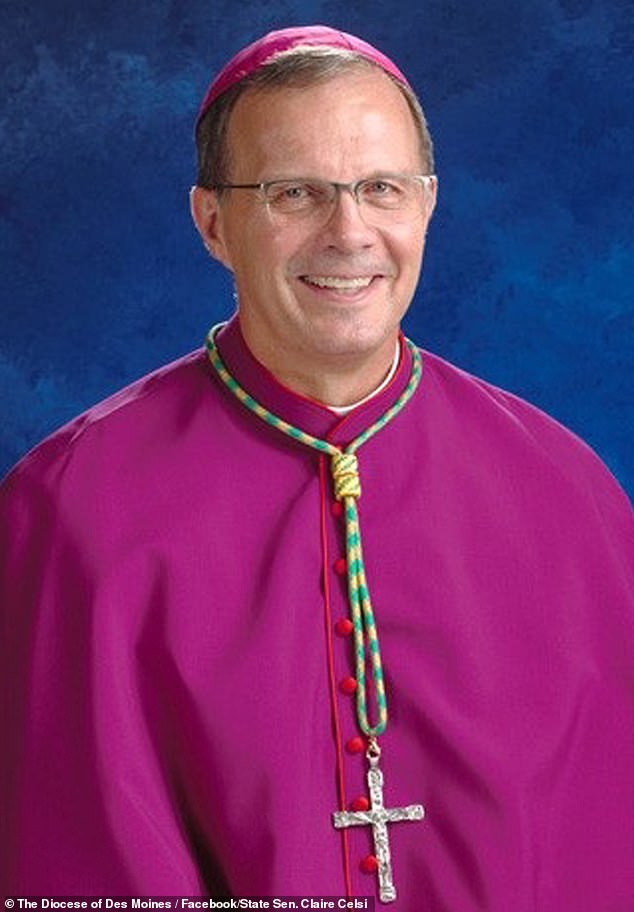 On Monday, the diocese, which is led by Bishop William M. Joensen, 60, released the official policy document outlining the new rules and how the organization ultimately decided on the changes

“The Diocese of Des Moines is committed to outlawing transgender children,” Celsi, who expressed concern about the diocese’s policies on Facebook, wrote in a Jan. 4 post after they were announced.

The Democrat went on to point out that the diocese receives more than $100 million in public tax money for its schools and has requested even more funding in recent years.

“These schools want public money and they want to treat children in a way that could make them commit suicide,” the politician said.

Celsi would then brazenly declare: “Jesus wouldn’t do that.”

Days later, in another post, the state senator renewed her attack on the religious organization, citing the fact that she herself attended Beehive State’s Catholic school as a teenager.

Celsi tagged the diocese directly, writing, “The Diocese of Des Moines seeks to shun and exclude people based on their sexual orientation and gender expression.

“This is clearly NOT behavior that should be allowed in schools that are already receiving $100 million in public tax money and are crying out for more.”

The diocese, a sect of the Catholic Church, produced an official document outlining the new rules – which include a requirement that students participating in sports only play in teams matched to their sex at birth. Pictured: One of the schools in their jurisdiction

Other rules to be enforced include that if the school has a dress code, students must follow it based on their biological sex, along with a strict ban on gender blockers on school grounds

In the post, the politician shared an image of a poster she said was put up in her class when she was a six-year-old student. The sign read, “God doesn’t make trash.”

Celsi’s view that the diocese is overstepping its boundaries and defying the rights of its young students was shared by a number of local LGBTQ+ advocates and faith leaders, who say the new policy preaches hatred against the transgender community.

One such group, the Interfaith Alliance of Iowa, recently called the policy “dangerous” and argued that it encourages “bigotry” toward transgender Iowans.

Other opponents include Keenan Crow, One Iowa’s director of policy and advocacy, who insists the recently established rules – which the diocese has since defended as “part of a lengthy process” aimed at answering questions from leaders in its schools and Answering churches – it will harm students and churchgoers.

Other opponents include Keenan Crow, director of policy and advocacy at One Iowa, who insists the recently enacted rules will harm students and churchgoers

“It sounds like conversion therapy to me,” Crow said of the guidelines Monday. “What we know for certain not only fails to deliver the results promised, but in fact it is…a dangerous discredited practice that every major American medical association has opposed.”

Crow’s colleague Courtney Reyes, executive director of the LGBTQ+ equality organization, went on to slam the diocese in a statement, slamming the group for insisting the guidelines called for “genuine compassion” for transgender people.

“No other members will have to fight to be called by their correct names, use their correct pronouns, or gain access to the appropriate restrooms,” the activist wrote in a written statement after the full breakdown of the guidelines was released Monday .

“To call this ‘compassion’ is to confuse ‘hate’ with ‘love,'” Reyes continued. “You cannot pretend to be compassionate while misgendering people and denying them access to all spaces under your control.”

The backlash comes after the contents of the then-to-be-released plan were received and reported by KCCI earlier this month.

On Monday, the diocese — which is headed by Bishop William M. Joensen, 60, and has responsibility for four hospitals and a number of schools and churches — released the official policy document outlining these new rules and how the organization eventually decided about The changes.

A spokesman for the diocese wrote that the rules are “part of a lengthy process” designed to address concerns from school and church staff about students’ gender identity.

Diocese of Des Moines communications director Anne Marie Cox confirmed Monday that all seven provisions – from pronoun and locker room enforcement to the ban on gender blockers – will go into effect immediately.

DailyMail.com has reached out to the Diocese of Des Moines for comment on the new guidance – which opponents like Celsi and Crow have vowed to fight.

Speaking to Register Monday, Celsi explained that many people exploring their gender identity are often young and the new rules are now removing schools as a haven.

“To actually come out and say, ‘We’re going to eradicate this, we’re going to pretend it doesn’t exist,’ and issuing that kind of edict is reprehensible in my opinion,” she told the paper.

Crow, meanwhile, concedes the diocese has the right to set its own guidelines but says the rhetoric in the new rules is harmful and should be spoken out against.

“The most dangerous thing for an LGBTQ person is a lack of acceptance from their family,” Crow said. “So if an institution can convince their family members that they should be treated that way, that absolutely goes to the heights of the negative mental health outcomes and suicide risk.”

The Diocese of Des Moines currently operates 80 churches, 17 Catholic schools and four hospitals in southwest Iowa. It is not yet clear how the new rules will be enforced in hospitals.