Adele took home her first Emmy on the night of one of the Creative Arts Emmy Awards, held in Los Angeles, California on Saturday night.

Despite not being present at the ceremony, the 34-year-old singer-songwriter took home the Outstanding Variety Special (Pre-Recorded) award her CBS special Adele One Night Only, which aired last November.

In the special, Adele performed new music for the first time in six years and took part in an intimate interview with legendary talk show host Oprah Winfrey. 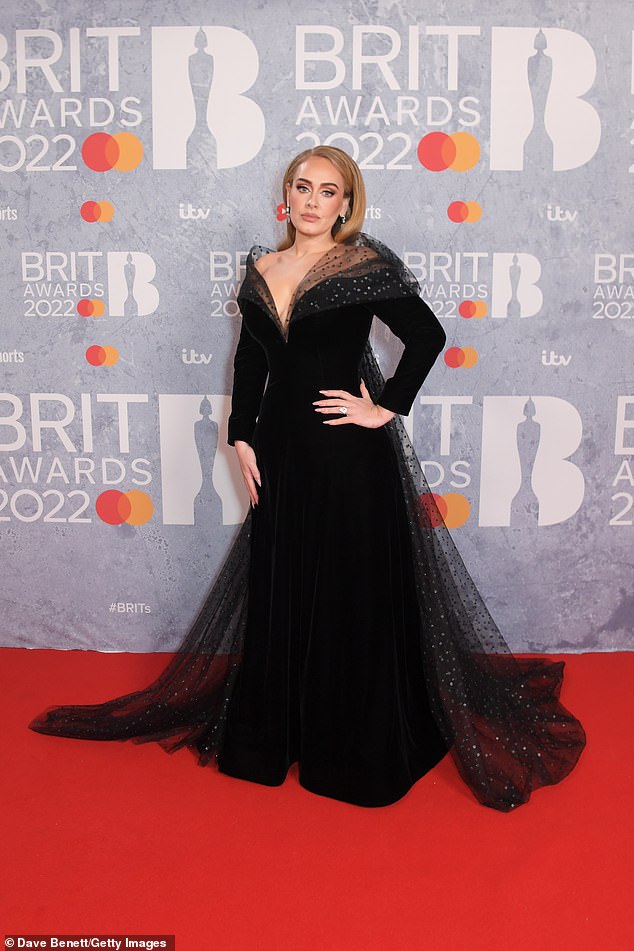 Main! Adele took home her first-ever Emmy on the night, one of the Creative Arts Emmy Awards held in Los Angeles, California on Saturday night; Seen Adele in February

The Rolling in the Deep singer’s Emmy win is just one Tony Award win away from becoming an EGOT winner.

An EGOT winner is an individual who has won an Emmy Award, a Grammy Award, an Academy Award or Oscar, and a Tony Award.

To date, only 17 people have been able to collect all four, although many have come close.

Gold: The singer-songwriter, 34, won the award for her CBS special Adele One Night Only, which aired last November

Reputable Company: So far, only 17 people have been able to collect all four, although many have come close

Some of the biggest EGOT winners include West Side Story star Rita Moreno, The Producers director Mel Brooks, legendary comedian Whoopi Goldberg, and All of Me singer John Legend, the second youngest person to accomplish the feat.

Adele has won 15 Grammys and took home the Oscar for Best Original Song in 2013 for the James Bond theme Skyfall.

Her big Emmy win came just days after she openly spoke about giving up her Las Vegas residency because she lacked the intimacy of her previous shows.

The multimillionaire dismayed fans, many of whom had already paid to see her on stage at the Colosseum at Caesars Palace, after canceling her string of performances in a tearful Instagram post just hours before her first performance in January.

One more win: The Rolling in the Deep singer’s Emmy win is just one Tony Award win away from becoming an EGOT winner

Adele, 34, recalls the moment she pulled the plug during an interview with ELLE and admits the decision was made while conducting a sound check in the cavernous venue while gazing at row upon row of empty seats.

“There just wasn’t a soul in there,” she said. “The stage setup was wrong. It was very detached from me and my band and lacked intimacy. And maybe I was trying too hard to give him those things in such a controlled environment.

She also reportedly had trouble setting up the pool of water she was supposed to stand in, comparing it to an “old pond”.

“Adele described the pool as a ‘baggy old pond’ and flatly refused to stand in the middle,” a source allegedly said.

After leaving Vegas, the singer admitted she was dealing with the consequences of her cancellation, but refused to reverse the decision.

Devastated: When Adele tearfully announced her show was ‘just not done’, fans had hoped it wouldn’t take her long to rearrange her performances

“The first few months were really, really tough,” she said. “But it actually increased my confidence because it was a very brave thing to do.

“And I don’t think many people would have done what I did. I am very proud of myself for standing by my artistic needs.”

She will now be focused on a brand new show, having personally overseen creative direction, with her first priority being to create the intimacy she felt was lacking in her original set.

Defiant: After leaving Vegas, the singer admitted she was dealing with the consequences of her cancellation, but refused to reverse the decision

The star called her revised plans for the 32 concert dates, which run from November 18, 2022 to March 25, 2023, “nostalgic” and insisted they would tell the story of her career.

She said: “I want to tell the story from the beginning of my career to now. I won’t reveal too much about it, but the show is growing.

“It’s all about the music, and it’s really, really nostalgic. It will be so beautiful.’

Nearby: Adele with her sports agent boyfriend Rich Paul, who was reportedly involved in the development of her new show

In January, Adele told fans, many of whom were already in Las Vegas at the time, of various reasons why she was pushing the residency back.

“My show isn’t over yet,” she said. “We’ve tried absolutely everything to put it together in time and for it to be good enough for you. But we have been absolutely devastated by delivery delays and COVID.

After the postponed dates for the performance were leaked, the singer took to Instagram to finally confirm the show will start in November and thanked fans for their “patience.”

Insiders at Caesars Palace camp told TMZ in May that the resort and Live Nation would need to reach a workable agreement with the singer within a month for the show to go ahead.

Adele’s boyfriend Rich Paul, a high-profile sports agent, had apparently entered negotiations over the show, which is said to bring in $150 million.

The sources said Adele had several points of contention about the show, including but not limited to the choir and the sound system.

WINNER of the first night of the Creative Arts Emmy Awards

Outstanding Sound Mixing for a Variety Series or Special

Outstanding host for a reality or competition program

The Beatles: Back (Disney+)

Outstanding Directing for a Documentary/Non-Fiction Program

Outstanding Writing for a Variety Series

https://www.dailymail.co.uk/tvshowbiz/article-11177687/Adele-nears-EGOT-status-takes-home-Emmy-Award-CBS-special-Adele-One-Night-Only.html?ns_mchannel=rss&ns_campaign=1490&ito=1490 Adele nears EGOT status when she takes home the first Emmy Award for the CBS special Adele One Night Only

Serena Williams is NOT the GOAT despite the worship cult