A black woman with two university degrees has won a £20,000 payout after she said she felt “humiliated” when her manager at BT joked she could be “deported”.

Fignola Alexandre, who is from the US, was “deeply shaken” when boss Craig Warner made the insensitive joke about her visa extension request.

Mr Warner also “shocked” Ms Alexandre and another black employee by suggesting that the fact there weren’t many black swimmers was “because of class”, a court heard.

Mr. Warner denied making the comment, insisting he instead quoted a tweet about how “elite black NFL players” can’t swim because they come from “underprivileged backgrounds.” 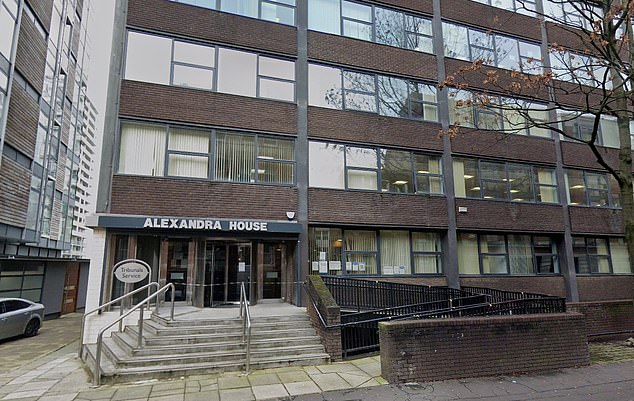 BT Openreach staffer Fignola Alexandre has been awarded over £20,000 in a Manchester court (pictured) after she said a manager “humiliated” her at work.

The Manchester Tribunal heard that Ms Alexandre – who is of Afro-Caribbean heritage and moved to America from Haiti as a child – began working for BT in September 2016 as a graduate.

She has been described as highly educated, with two degrees – one from the prestigious Columbia University in New York and a masters from Manchester University.

In August 2019 she took up a new role as an industry engagement specialist with a agreed salary of £38,000 per year.

She reported directly to Mr Warner and was hired at the same time as two other women – one of whom, Bernice Iyanda, is also black.

After settling into her new job, the court heard Ms Alexandre became “anxious” about the impending expiration of her work visa.

Although the application for a visa extension had already begun, Ms Alexandre reportedly found the process “stressful”.

The court was told she was concerned that those responsible for extending the visa might be busy with other matters, meaning her application would not be submitted on time.

In early December, Mr Warner addressed Ms Alexandre’s concerns about her visa at her request to senior managers.

However, during a call around the same time, Mr Warner also made a joke about Ms Alexandre being “pushed off”.

Although at the time neither she nor Ms Iyanda – who was also on the phone – responded to the comment, Ms Alexandre told the court she felt “shocked and humiliated”.

Her visa extension was later granted in a timely manner.

At the end of January 2020, Ms Alexandre, Mr Warner, Ms Iyanda and another white male colleague traveled to Belfast in Northern Ireland on a working visit.

The tribunal heard the group went out to dinner together one night, during which Mr Warner is said to have claimed the absence of top black swimmers was due to “class”.

Testifying before the tribunal, Ms Alexandre said the conversation arose after she explained that she “can’t swim” and doesn’t like swimming “because of her hair”, which she says is a common reason in the black community not to swim.

She says Mr. Warner then made a contribution and said, “I thought it was because of the class.”

Mr Warner denied the lack of professional black swimmers was due to “class” – but told the court he was referring to a tweet about black American football players not being able to swim. He said the NFL tweet referred to some elite athletes from underprivileged backgrounds where swimming isn’t encouraged or just isn’t available.

Ms Alexandre and Ms Iyanda were “very offended,” it said, and took his comments as belonging to “low class” blacks.

In her evidence, Ms Alexandre referred to historical racial segregation in the United States, mentioning civil rights activist Rosa Parks and “pools that are emptied when a black person has swum in them.”

In late January, Ms Alexandre wrote to Mr Warner that she felt she was not performing her role well and felt “judged”.

After consulting with senior managers, Mr. Warner told her he might need to put her on a coaching plan which, if it doesn’t result in performance improvement, could ultimately lead to her being fired.

She declined an invitation to a meeting in mid-February to discuss the plan and filed a formal complaint against Mr Warne’s comments about her possible deportation and black swimmers.

Three days later, she was put on sick leave due to anxiety and stress.

The court heard the inquiry into the complaint later “excused” Mr Warner’s comments and Ms Alexandre’s appeal was also dismissed.

However, labor judge Hilary Slater ruled that both the deportation and the swimming comments constituted harassment.

At a hearing to determine Ms Alexandre’s compensation, Judge Slater said, “We accept Ms Alexandre’s evidence that she found this ‘joke’. [about deportation] extremely humiliating and it made her deeply distressed.

“We think it is likely that this was an ill-considered ‘joke’ made without proper consideration of its likely impact on someone whose right to remain in the UK was based on a successful visa application.

‘[In relation to the comment about swimming]She felt so shocked, hurt, and upset that she didn’t know how to react.

“She figured if Craig Warner believed blacks couldn’t swim was the lesson, he probably didn’t see her or her colleague, who was also black, as his equal.

“The comment was particularly hurtful because the issue of swimming in the black community, particularly in the US, is linked to a painful history of racism where swimming pools would be emptied if a black person stepped foot in them.

“This was the first time in her career that she realized that her skin tone could have an impact on how she is perceived in the workplace.

“The harassment contributed to her poor mental health, to the point that she was on sick leave for about six months and had suicidal thoughts.”

Her other allegations of racial discrimination and victimization failed.

https://www.dailymail.co.uk/news/article-11649405/Afro-Caribbean-BT-worker-wins-20-000-humiliated-manager.html?ns_mchannel=rss&ns_campaign=1490&ito=1490 Afro-Caribbean BT worker wins £20,000 after being ‘humiliated’ by her manager

According to leaks, Rebirth Island is coming to Call of Duty: Warzone Mobile