When Brendan Rodgers met Leicester owner Aiyawatt Srivaddhanaprabha for lunch this week, it’s not hard to imagine what was on the menu.

The pair sat down in the club’s chic training canteen on Wednesday for a bite to eat ahead of Saturday’s meeting with Brighton, where the faltering Foxes will look to end a run of four straight defeats.

Leicester are in a bind. Numerous players have been withdrawn since the Premier League returned after the World Cup hiatus, including – at different times – Ricardo Pereira, James Justin, Jonny Evans, James Maddison, Kiernan Dewsbury-Hall, Boubakary Soumare and Patson Daka. 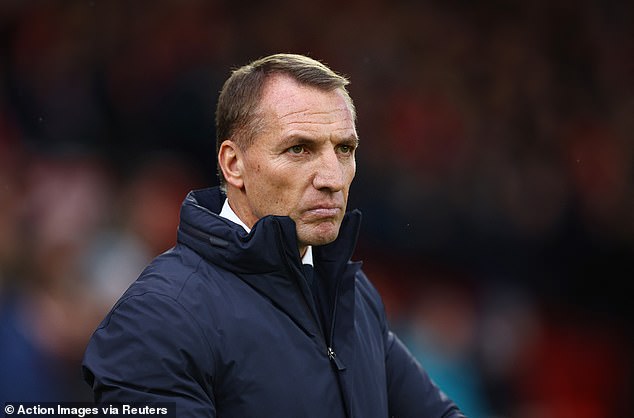 They are just two points above the relegation zone and although Leicester boss Rodgers called for calm at his press conference on Thursday, the next league games after Brighton are against Aston Villa, Tottenham, Manchester United and Arsenal. Life doesn’t get any easier.

A significant segment of the fan base has been frustrated with Rodgers for some time, although it’s difficult to disagree with the manager’s thoughts on the need for a roster refresher.

Srivaddhanaprabha – known as Khun Top – is expected to attend the Brighton game and if the game goes awry, the board will likely feel the anger of the fans. Boos at half-time and full-time have become the norm.

As Leicester slipped to defeat at Nottingham Forest last weekend, some fans held a banner that read ‘Missing! LCFC Board.’

The off-pitch inertia has unsettled them, as has the inconsistency on it. Wout Faes was the club’s only outfield signing last summer (Rodgers had wanted six new players) as Leicester sought a more solid financial footing, with the next set of accounts for 2021-22 expected to show significant losses.

Although Leicester believed they had assurances he would re-sign, Youri Tielemans will leave for nothing once his contract expires in the summer. James Maddison’s contract expires the following year and the playmaker has shown little interest in extending it as Newcastle await developments after two offers were rejected last summer.

With every poor result, Rodgers’ own position grows more tenuous as he nears his fourth anniversary at Leicester. He looked extremely vulnerable at the start of the season as Leicester took just one point from their opening seven games, particularly after a chaotic 5-2 defeat at the Amex Stadium to their opponents on Saturday 4 September.

But Khun Top stuck to his belief and was rewarded with a quick improvement ahead of the Worlds as the Foxes picked up 16 points from a possible 27. But the old fragility has crept back in. With Jamie Vardy on the retreat, Leicester have missed chances and look brittle again at the back.

Leicester’s story is proof that outside of the Premier League’s financial elite, no club is ever too far from a crisis. It has been less than a year since Leicester were in a European semi-final; fewer than two since winning the FA Cup and Community Shield; less than seven since they won the Premier League.

But all it takes is a few bad signings, sloppy deal planning to create a domino effect that has Leicester struggling to survive and angering their fans like they have at no point since winning the title.

“He’s a great man,” Rodgers said when asked about his meeting with Khun Top. “He’s just here to support. We had some lunch and he’s in good spirits. We just talked in general. He understands where we are and he was fine.’

The imminent arrival of Danish left-back Victor Kristiansen for around £17million should lift spirits a little and Leicester will look to add a right winger and centre-back before the window closes.

With Fiorentina demanding £40m for wide man Nicolas Gonzalez, the Foxes are now keeping a close eye on Tete, the Brazilian who has been loaned to Lyon from Shakhtar Donetsk. Ayoze Perez’s likely departure to Real Betis could make room for his arrival.

Stoke defender Harry Souttar is another player to be admired and if a deal can be agreed it could open the door for Caglar Soyuncu or Jannik Vestergaard.

Leicester have signed on for FC Copenhagen defender Viktor Kristiansen (above).

“The chairman is so determined and ambitious that the club will be as good as it can be,” Rodgers said. “This season has been a challenge but it doesn’t diminish the ambition of him and the board, which should be great news for the fans.

“I understand we’re in a position that we haven’t been in for a couple of years and that can be difficult [for fans] to take. We have to do things differently because the resources are not the same.

“You have to be smart with recruitment, strategy and overall vision and while I’m here I will fight for that. When I started (February 2019) the goal was to shake up the market at the top end of the table.

“The pandemic and some of the other invisible challenges that people wouldn’t see from the outside have made it very difficult for us, but we have to find a way.

“Of course there will be changes over the next year and that will allow the team to grow again. For this moment there is a challenge to accept. Players will fight and everything will be fine. We must get through this period by constantly working and fighting together.’

Fortnite Rift Warden Stellan Outfit: Cost How to Get It