By Dan Ripley for MailOnline

Newcastle United have been given a huge boost ahead of their Liverpool clash after new signing Alexander Isak finally got his work permit so he can play.

There were doubts as to whether the Sweden international would be able to play as he failed to receive his visa on time despite signing for £60m from Real Sociedad last Friday.

After missing the weekend’s 1-1 draw with Wolverhampton Wanderers, the striker can now play for Eddie Howe’s team at Anfield on Thursday night, having now received his work permit from the Home Office. 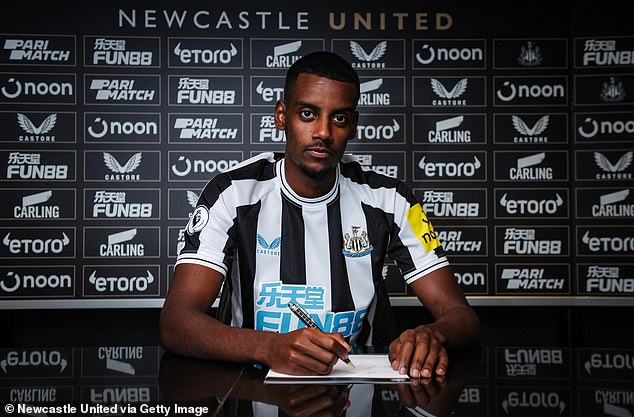 There were fears Eddie Howe might not yet know if Isak would be available at Anfield until 75 minutes from kick-off, but the Newcastle boss is now expected to make his new signing debut sometime later in the evening.

The timing is particularly welcome for the Magpies, who face the tough test against Jurgen Klopp’s side and know they will be without Bruno Guimaraes, Callum Wilson and Allan Saint-Maximin, all absent with hamstring injuries.

Despite the work permit delays, Isak has been training with his teammates this week – which is not part of his permit – and Howe has been impressed with Isak.

“We trained with him minimally between games but what he did he did very well. He looked bright and sharp, but we’ve only seen him in flashes. I’m excited about him.”

Isak expressed his delight at the move to Tyneside, saying: “It’s been a big, big decision for me but it’s a decision I’m really happy with.

“It’s a great, historic club that everyone would love to play for, with great fans. They were a big part of why I came here – and also the club’s project, which I really believe in.

“I want to win things. I want to achieve the goals and objectives of the team.”

Elizabeth South: Adelaide's father claims he was protecting his family when he hit a man with a golf club