All eyes are on the border areas of Russia and Ukraine. All western eyes, that is.

And understandably so. The consequences of the Russian invasion are enormous, not least when it comes to energy prices.

However, if the West is busy, that doesn’t mean the rest of the world has come to a standstill. Life doesn’t stand still just because NATO and Moscow are locked in a conflict.

Other countries have their own problems – pressing ones. And it should come as no surprise that a number of mid-tier powers, including India, Turkey and South Africa, have refused to take sides. 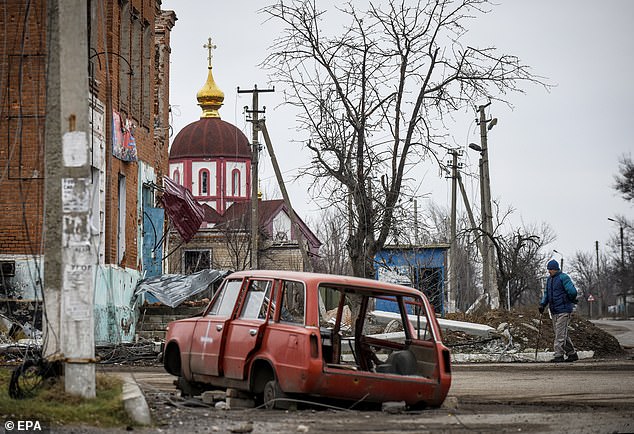 A man walks on the street in the retaken village of Drobysheve, Donetsk, Ukraine on Saturday

Ukrainian soldiers work on a military vehicle on a road outside the badly damaged city of Siversk, Ukraine

The vicious civil war in Yemen, the fighting in the Horn of Africa, the perennial conflicts in the Middle East – all of it goes on, even if the western media has turned its eyes elsewhere.

These battles will not remain frozen just because America is busy. And ignoring them is a mistake, because the various outcomes will help shape the future for all of us.

Strategically located between East and West, Turkey has been particularly active. It now seems clear that America is concentrating on Russia, but that Ankara will use the power vacuum to assert its ambitions on its own border with Syria.

In particular, Turkey will conduct a final military invasion of northern Syria and expel the Kurdish separatists and militias of the PKK (Kurdistan Workers’ Party), PYD (Democratic Union Party) and YPG (People’s Defense Units) who have a strong presence there.

And don’t imagine that ISIS is gone – another force Turkey is determined to banish from its borders.

The consequences of the Russian invasion are enormous, not least when it comes to energy prices

The vicious civil war in Yemen, the fighting in the Horn of Africa, the perennial conflicts in the Middle East – all this goes on, even if the Western media has turned its eyes elsewhere (Image – A Ukrainian tank in the newly conquered city of Siwersk)

These battles will not remain frozen just because America is busy. And ignoring them is a mistake, because the various outcomes will help shape the future for us all (Image: Ruins in Idlib, Syria, January 8)

Huge refugee camps are located across Syria, like this one in the village of Ein El-Bayda in Idlib

So far, American support and protection for the Kurds in northern Syria has thwarted such moves. America sees the Kurdish militias as important allies against ISIS.

But with both the West and Russia now dependent on Turkish cooperation for fuel and the distribution of vital supplies, we find ourselves in a new world.

Turkey, a NATO member, has already blocked membership bids from Finland and Sweden as it seeks to extort additional concessions from its western allies.

Its strategic importance is such that some have suggested Turkey could even play a role in future peace negotiations between Russia and Ukraine.

In the short term, Turkey wants to set up a 30-mile-deep buffer zone in northern Syria. Aside from their desire to clear the area of ​​armed separatists (who want a Kurdish homeland that would include significant parts of Turkish territory), this is to allow four million Syrian refugees to Turkey to return there and live under Turkish protection.

But Ankara’s broader goal is to shed American involvement in Syria and reassert itself as the region’s leader – a role it naturally long had under the Ottomans.

Turkey isn’t the only country we can expect to flex its muscles while America looks the other way.

Saudi Arabia, Indonesia and South Africa will all use the geopolitical uncertainty to further their own interests where they can.

Yemenis are struggling to get their families’ donated meals from a charity kitchen in Sana’a, Yemen, earlier this month

The Chasiv Yar Cemetery in Bakhmut, Ukraine, is full of civilians who lost their lives in the conflict

Like Turkey, it sees an opportunity for greater independence from major powers with improved regional status.

With its own sizable Turkish minority, Saudi Arabia is likely to side with Turkey in local power games. Both countries are Sunni Muslims, in contrast to Riyadh’s sworn enemy, Iran, who are Shia.

South Africa has refused to condemn the Russian invasion. Rather, it has preferred to bolster its broader diplomatic status by conducting naval exercises with Russian and Chinese fleets.

India, meanwhile, has seized the opportunity to buy huge amounts of discounted Russian oil, ignoring Western sanctions. Because it needs the oil and knows it can get away with whatever Washington says.

The rise of China combined with the decline of America means the old world order is crumbling before our eyes.

Only now are we beginning to see what form the new world might take.

https://www.dailymail.co.uk/news/article-11661653/All-eyes-Russia-Ukraine-war-stopped-Middle-East-writes-ERBIL-GUNASTI.html?ns_mchannel=rss&ns_campaign=1490&ito=1490 All eyes are on Russia and Ukraine – but the war in the Middle East has not stopped, writes ERBIL GUNASTI