A car that was allegedly stolen struck another car while chasing a silver Volkswagen in what police believed was a gang shooting.

Footage showing the moment the RAV4 collided with another car at an intersection was taken at 7.20am on Bell Street near Coburg.

Police allege the car was traveling at high speed and ran a red light before hitting the front of a car that was mid-corner. 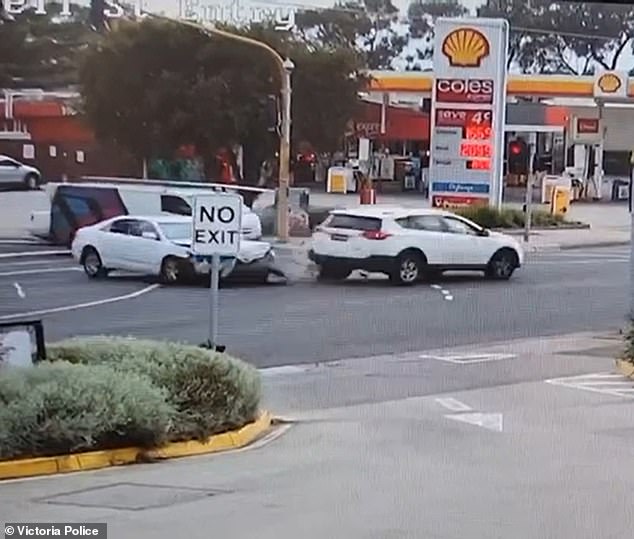 The video shows the RAV4 clipping the side of a second car just seconds later.

A man was taken to the hospital with minor injuries after the collision.

During the apparent chase, a person in the vehicle allegedly fired shots at the Volkswagen while Gang Crime Squad detectives investigated the incident.

“It appears that an occupant of the Toyota fired multiple shots in the direction of the Volkswagen,” a spokesman told ABC.

The Toyota is understood to have been stolen from Thornbury between November 19 and 20 more than a month before the chase.

The Volkswagen was found on New Year’s Eve, December 31, with a shattered rear windshield, which police believe was caused by a bullet.

Police have charged four men in connection with the alleged car chase in which two vehicles were damaged (pictured the aftermath of the accident).

Three men were charged earlier this month in the alleged car chase involving a fourth man, a 32-year-old from Cranbourne, who was arrested on Friday.

Another man has been charged with multiple firearms offenses and is due to appear in Melbourne Magistrates Court on April 13.

Officials from the Echo Taskforce and the Maribyrnong Criminal Investigation Unit are also involved in the investigation and released the footage in hopes of finding more witnesses.

Anyone with relevant information or footage of the chase is urged to contact Crime Stoppers.