Always the showman! Mike Dean filmed singing his own retirement song, which nods to his past career as a poultry butcher – with “the funniest referee we’ve ever seen” living up to his title

Mike Dean was filmed singing his own retirement song – written as a tribute to the underdog referee after his decision to step down from the field in May this year.

A former guest on the That Peter Crouch podcast, Dean has become a fan favorite for many listeners with his tales of difficult players, run-ins with managers and his former job at a poultry factory. 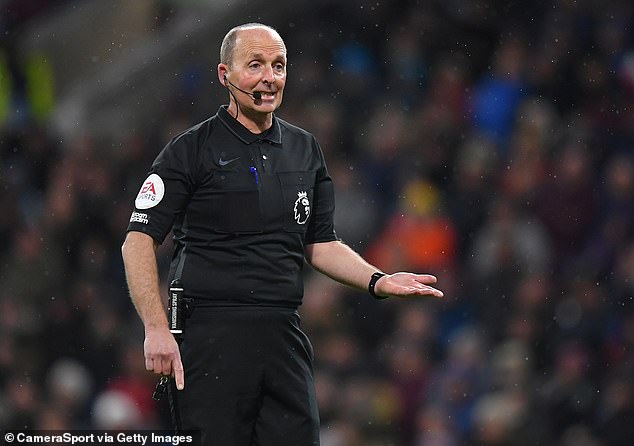 Dean appeared to be performing in a branch of Sam’s Chickens, perhaps in Merseyside, where he lives, and took great delight in imitating talented musician Joel Stewart’s song.

As the store clerks behind him donated spotlights from their cell phones, Dean jumped straight into an expert rendition of the song.

‘Mike Dean, Mike Dean’, he is filmed in the video. “The funniest referee we’ve ever seen.

With that, the curtain fell on a career full of panache, controversy and some funny moments

“Mike Dean, Mike Dean,” he continues. “The chicken killing machine,” he concludes, referring to his previous job at a poultry factory before he got his big break as a referee.

Dean, known for being a bit of a showman as a referee, seemed to take great delight in singing the song to a captivated audience.

Notable moments in Dean’s career on the field include a series of red cards he hasn’t seen, as well as celebrations at having successfully played an advantage that resulted in a goal.

Peter Crouch and Chris Stark, co-hosts of the podcast, which originally ran on BBC before moving to Acast, were particular fans of Dean and his utter honesty when they appeared on their show over two years ago.

Writing for Sportsmail in April this year, Crouch recalled how Dean’s story had instilled in him a “newfound” respect for referees as he realized the effort he had gone to to reach the climax of the game.

“As I became aware of this drudgery, the sacrifices (of his time, not chickens) he made to reach the top of his preferred profession gave me a newfound respect for umpires,” Crouch wrote.

‘Mike blows his final whistle, swings his last card theatrically – celebrates his final goal from an advantage! – in May and the Premier League is getting worse because of his absence.

“He is unique in modern football. Sure, the product is polished, but it’s missing characters like Mike, and that’s a big bogeyman of mine. Where are the guys willing to chat with me about gutting poultry for a night out at a pub or on a podcast? The game is gone!’