Newly unearthed photos show missing Massachusetts mom Ana Walshe smiling with her colleagues and former boss – the last person to see her alive after spending New Year’s Eve together with her and her now accused killer husband.

In images obtained by DailyMail.com, the 39-year-old high-powered realtor can be seen posing for corporate photographs in October 2021 when she was working for Gem Mutlu, the head of Boston-based real estate agency The Mutlu Group.

The photos show a happy and beaming Ana, who was hired as the company’s director of operations in 2020, flashing a smile – and at times posing playfully – in group shots with her staff.

She is also seen in a number of pictures posing arm-in-arm with Mutlu, with whom she had a friendly and professional relationship. 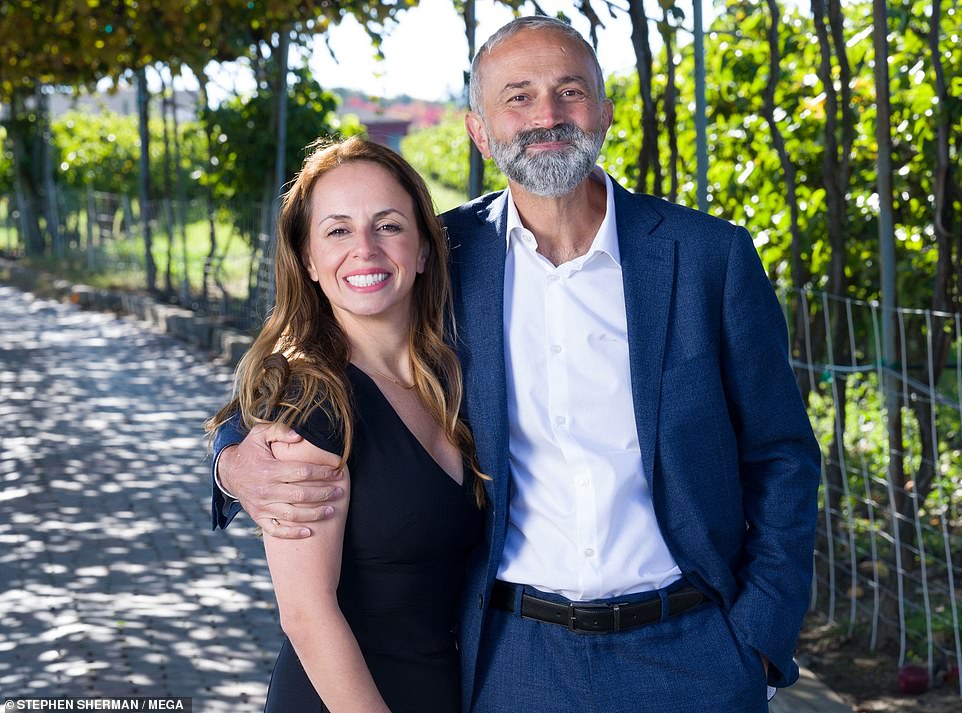 The images, obtained by DailyMail.com, show a happy and beaming Ana  flashing a smile – and at times making silly poses – in group shots with her former colleagues at Boston-based real estate firm, The Mutlu Group

Despite leaving for a new real estate agency in Washington, D.C. in February 2022, Ana maintained a close friendship with Mutlu, who she had met years earlier through her husband Brian Walshe.

Serbian native Ana moved to the United States from her home city of Belgrade in 2005 and had worked in the hotel business before switching to real estate in 2020.

She was initially based in Washington D.C. where she had an executive role at the Willard Intercontinental Hotel.

It was only after she married Brian in 2015 that she moved to the Boston area and later joined Mutlu’s company.

The Turkish-born real estate professional is believed to be that last person to have seen the mother-of-three alive in the early hours of New Year’s Day after celebrating with the couple at their home in Cohasset.

Ana has not been seen since the morning of January 1, when she was due to fly to D.C., where she was the regional manager at upscale realtor Tishman Speyer.

Mutlu, who met Ana through her husband Brian, remained friends with the couple after she left his company last year, and spent New Year’s Eve with them at their Cohasset home

Ana, who was born in Serbia, moved to the US from her home city of Belgrade in 2005 and had worked in the hotel business before switching to real estate in 2020

She was scheduled to take a ride share to Boston Logan Airport that day but never boarded the plane.

In the wake of her disappearance, Mutlu told local media the two had hugged goodbye around 1:30am and that there had been ‘no indication’ that anything was wrong.

He described his night with the Walshes as ‘festive’ and said an ‘elaborate meal’ was served.

‘We hugged and celebrated and we toasted just what you do over New Year’s,’ he told WBZ-TV at the time.

‘There was a lot of looking forward to the new year. There was no indication of anything other than celebrating the new year, problems on hold.’

He said his former employee had been sitting on a barstool in their kitchen, texting her friends during the meal and party.

‘There was absolutely no indication that any modicum of a tragedy, of disappearance, or anything else could have happened that night,’ he added.

Mutlu, who revealed the couple had been living in separate homes, said he was shocked to receive a call days later from Brian informing him that Ana was missing.

He told the outlet that although he had met Ana through Brian, he has become suspicious of his friend.

‘Both Ana and Brian have been individually and together very impactful on my life. My biggest fear had shifted towards the children, I wondered if the children were safe.

‘A part of me had this suspicion all along that there may have been foul play and that somehow just the story just wasn’t adding up,’ he said.

Police have been piecing together a case against Brian that is believed to include evidence such as blood found in the couple’s basement, and a bloody hatchet, in the weeks since she vanished

Walshe, 47, was arrested and charged last week with misleading a police investigation, and on Wednesday (pictured) was formally charged with her murder

Brian reported her missing to police on January 4 after her employers raised the alarm when she failed to show up for work.

He was arrested and charged last week with misleading a police investigation, and on Wednesday was formally charged with her murder.

For weeks, police have been piecing together a case against him that is believed to include evidence such as blood found in the couple’s basement, and a bloody hatchet.

He also reportedly Googled how to dispose of a 115-pound woman’s body in the days surrounding her disappearance.

Ana’s body has not been found, despite searches of the family home, backyard and other areas of Cohasset, where she lived with her husband and their three sons.

Prosecutors believe her body was unknowingly shredded and incinerated by trash services after her husband Brian allegedly tossed them in a dumpster on January 2.

During his 14-minute court appearance on Wednesday he uttered just two words, saying ‘I do’ when asked by Judge Mark Coven if he understood the charges against him.

In court on Wednesday, Norfolk County Assistant District Attorney Lynn Beland said: ‘Police tried to track down what happened to the bags the defendant was seen throwing in the dumpster earlier at Abingdon.

‘These bags in this dumpster were already picked up and taken to a location for shredding and to be incinerated.

‘By the time police located that, they were already destroyed.’

Ana and Brian are shown on their wedding day in 2015. They met while she was working in a hotel in Washington, D.C.

The Walshes have three sons, believed to be aged two, four, and six. Family friends are headed to court in an attempt to gain custody of the boys

Ana is said to have been the family’s main breadwinner and would split her time between Washington D.C. and Massachusetts, where they lived in Cohasset, 22 miles southeast of Boston

A spokesman for the District Attorney’s office confirmed to DailyMail.com that they believe those bags contained Ana’s remains.

Friends have told DailyMail.com the couple’s marriage was strained as a result of Ana’s grueling work schedule, which meant they spent much of their time living apart, with Ana in DC and Brian and the boys in Massachusetts.

She was also photographed without her wedding ring in some of the final photos taken before she vanished on January 1.

Though mystery shrouds her disappearance, aspects of Ana’s life have been uncovered throughout the investigation – that has shocked her community and loved one’s.

Ana, who had three sons with Brian all under the age of six, was the family’s main breadwinner and would split her time between Washington D.C. and Massachusetts, often posting her commute to social media.

Meanwhile, Brian, had been under house arrest after he pleaded guilty to federal fraud charges in 2021 for selling fake Andy Warhol paintings for $80,000 on eBay.

She fails to turn up to work in Washington DC, and there is no proof of her making it to the airport for her flight.

The caller told the operator he’d informed her husband

JANUARY 6: Fire reported at the house Ana shared with her husband

JANUARY 9: Police reveal they found blood in the basement of the couple’s home

JANUARY 10: Police reveal they found trash bags filled with bloody items, a hatchet and a hacksaw in a trash center near the home

She painted a domestic picture of the Walshes as one where the missing woman worked long hours at her high-powered job at an exclusive real estate agency in Washington DC – while her husband stayed at home doing chores.

She also recalled Brian Walshe’s reserved demeanor and how he ‘never showed any feelings.’

‘Them, two, I felt there was a lot of stress in the house,’ Munguia revealed earlier this week just before an outside prayer vigil in the quiet and beautiful coastal community of Cohasset, 22 miles south east of Boston.

A second friend, Pamela Bardhi, who worked in real estate with Ana in Boston, described the missing mother as a ‘sharp’ and ‘sociable’ person who would have slipped easily into a new life in DC.

‘Ana is a very sociable person. She can walk into any room and make friends everywhere,’ she said.

‘That’s just who she is. When she moved to DC, I knew she would mold pretty much wherever she was. She was built to be successful.’

Bardhi – who is at the forefront of a campaign to ensure the Walshes’ boys, aged two, four, and six, are not split up into foster care – compared the couple’s lives following the DC move.

‘And then you’ve got somebody at home who is facing federal charges, looking after the kids, dealing with all these things. And prior psychological issues.

https://www.dailymail.co.uk/news/article-11653469/Ana-Walshe-seen-unearthed-photos-former-boss-alive.html?ns_mchannel=rss&ns_campaign=1490&ito=1490 Ana Walshe seen in unearthed photos with former boss who was the last to see her alive