Andrew Tate’s security chief says the ex-kickboxer is “a bit paranoid” but has only ever asked him to REMOVE women from his home, not prevent them from leaving the house

By Ffion Haf for Mailonline

Andrew Tate’s security chief said the ex-kickboxer was “a bit paranoid” but had only ever asked him to remove women from his home, not prevent them from leaving the house.

Bogdan Stancu, who worked for Tate and his brother for several years, claims he has never once been asked to stop women leaving Romanian property.

The former special forces soldier told the BBC it was actually the opposite, and on occasion he had been asked to physically remove women from the home without violence because they were too drunk or causing problems.

Additionally, Mr Stancu revealed that Tate has been concerned about potential threats to him lately, although it is unclear what those were. 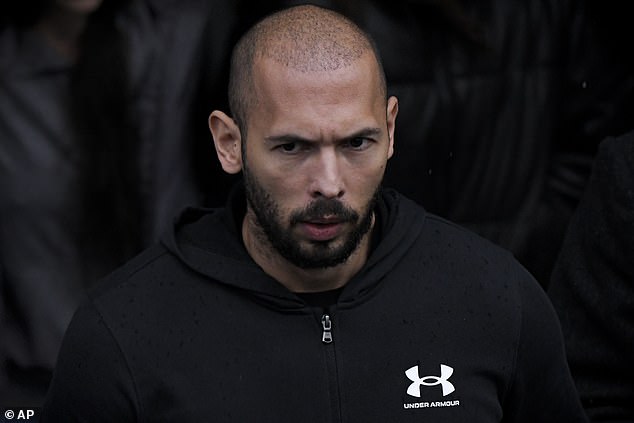 Mr Stancu revealed that Andrew Tate has been concerned about potential threats to him lately, but it is unclear what they were

He told the BBC the former kickboxer had gotten “a little paranoid” and believed “someone wanted to hurt him”.

Tate has become known for his attitude towards women in recent years and was arrested in Romania on December 29 in an investigation into alleged rape, human trafficking and organized crime.

After his arrest, recent news reports claim that Tate refused to let women leave his premises without being escorted by one of his employees, according to WhatsApp messages filed by prosecutors.

The messages allegedly show Tate threatening a woman on a WhatsApp group that includes his staff and the alleged victims.

Submitted by the prosecution and released by Gandul, they show one of the women asking to leave the premises.

Tate tells the woman not to go anywhere without one of three trusted associates.

Adding to these allegations, Tate’s admission that women staying at his luxury mansion weren’t allowed to leave when he told them “You’re not going anywhere,” was revealed in a newly leaked video.

In the clip, Tate claims that while he jets off to wherever he wants, women are “stuck” in his house if they live there.

Tate said: “With all these chicks just stuck in the house, sitting there bored and totally in love with me.

“And of course they don’t go out. You are not allowed out.”

Romanian police have been investigating Tate and brother Tristan since April last year.

The investigation came after a 22-year-old woman told police she was being held against her will last year, and culminated in officers last month raiding his mansion and taking the brothers into custody.

Asked by the BBC why he never seemed to doubt his employer’s intentions, Mr Stancu said: ‘I never doubt Andrew.’

The security chief acknowledged that it was fair for the police to continue their investigation and if the brothers were indeed convicted of any charges, they would have to face the consequences.

Tate and his brother Tristan, who have become famous in recent years for their attitudes toward women, were arrested in Romania on December 29 in an investigation into alleged rape, human trafficking and organized crime

https://www.dailymail.co.uk/news/article-11641377/Andrew-Tates-head-security-says-ex-kickboxer-asked-REMOVE-women-home.html?ns_mchannel=rss&ns_campaign=1490&ito=1490 Andrew Tate’s security chief says ex-kickboxer only asked him to REMOVE women from his home

Wolves agree a £4.4million fee for the Paris St-Germain and Spain winger