Anneka Rice was in high spirits as she filmed the reboot of her famous show Challenge Anneka in Liverpool, 30 years after the last episode.

She completed the ensemble with a pair of black knee high boots while walking around the set. 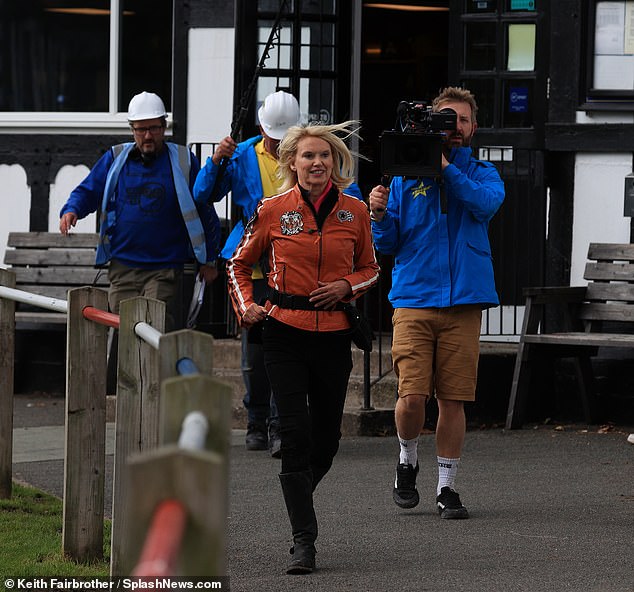 Beaming: Anneka Rice was in high spirits as she filmed the reboot of her famous show Challenge Anneka in Liverpool, 30 years after the last episode

Anneka donned a utility belt that cinched her waist while her blonde tresses swept effortlessly in the breeze.

The star sported a subtle soft makeup look that showcased her natural beauty.

It comes after Anneka explained how she wanted to “raise the flag for women today” with her return to television.

Filming: She completed the ensemble with a pair of black knee high boots while walking around the set

Hoping the rebooted show will help challenge stereotypes about gender roles on TV, just like their original show did for female hosts.

Speaking of Challenge Aneka’s prequel, Treasure Hunt, she said, “It put a woman in absolute control right at the center of the storyline, driving the narrative forward. It really changed the face of television and in many ways, and I kind of want to fly the flag for women today.

She said: “Forty years ago you have to remember where women were placed on television. They were usually either draped over cars as a prize for a trivia game, or they were located behind a news desk.

‘I feel the same as I did 30 years ago, but there may be more conversation about what we look like or how we deal with it, while men just go ahead and do it and their image and brand stays intact.’

Citing a project that helped Romanian children during the original show who are now helping in the Ukraine crisis, she said: “This absolutely blew my mind because 30 years ago it was like one humanitarian crisis morphing into another. “

She is back! It comes after Anneka, who is back with the same successful show format that has attracted millions of viewers, explained how she wanted to “raise the flag for women today” (Anneka pictured in 1989).

Soundman Dave Chapman – who featured prominently in the original show – will also return.

Anneka said: “I can’t believe this is actually happening. The last few years have shown us the full power of community and how good it is to be part of something bigger than ourselves.

“The whole team remains motivated to make a difference and shine the spotlight on people and organizations that need help.

“Three decades later, the problems may look different, but at heart they are the same; They are about people and communities.

“And we might look a little different, but our hearts and willingness to engage are the same.”

Anneka took to Twitter in May to share a short promotional clip, which she began completely covered by some blankets, except for her face.

She began by saying to the camera, “Hi everyone, welcome to the Challenge series.

“Listen you did so well, some are actually out of bed now, some of you made it to the bus stop.

“Some of the ninth graders at Skipton Primary have built an entire wind farm – so congratulations to you all.

Nineties chic: Anneka threw off the covers and sported a signature blue and pink ’80s fitness ensemble, which she wore on the show in the ’90s

In brief: A press release added that Channel 5’s Challenge Anneka will be executive produced by Anneka herself and Dan Adamson at Twofour

“I have a new challenge today. Today is a little different because I want you to delve deep into your closet and pull out your 1990s lycra.

“If you weren’t even born in the ’90s, don’t worry, consider clubbing gear because that’s what it looks like.”

Anneka then threw off the covers to sport a signature blue and pink ’80s fitness ensemble, which she wore on the show in the ’90s.

Iconic: The original program, which first aired in 1989, saw Anneka build a pool for orphaned seals, organize a party for children in need and convert two bungalows for two disabled residents in two days

She grinned and continued: “And why I’m in, ladies and gentlemen, is because I wanted to tell you and I wanted you to be the first to know – we’re about to start a new Challenge series! I know thirty years later. If I say we – Dave, are you awake?”

The presenter then panned the camera to her sound man – also under the covers – who replied: “Up, up. Yes, I’m awake!’

Anneka asked: ‘Are you ready?’

“Wait,” Dave said as he grabbed his microphone and then held it up. ‘Ready, I’m ready.’

“You will be ready even when your get up and go is up and gone.

“We’ll be getting ready in the next few weeks, so don’t worry. Now all you have to do is get the lycra out. More instructions coming soon. Much luck!’

In the original show, which first aired in 1989, Anneka worked to build a pool for orphaned seals in two days, help organize a party for children in need and plan the conversion of two bungalows for two disabled residents.

The format featured the show’s host – in her trusty giant truck – walking around using her phone while she planned the projects.

A press release added that Channel 5’s Challenge Anneka will be executive produced by Anneka herself and Dan Adamson at Twofour.

Back on the road: The format showed the show’s host – in her trusty giant truck – walking around and using her phone while she planned the projects