Prime Minister Anthony Albanese has limited options if the referendum on a national indigenous vote in parliament fails, experts say.

Mr Albanese’s first pledge when he became Prime Minister last May was full implementation of the Uluru Declaration of the Heart, which calls for an advisory vote enshrined in the Constitution.

But with criticism mounting for a lack of detail, there are early signs Mr Albanese might not get the pledge across the line. 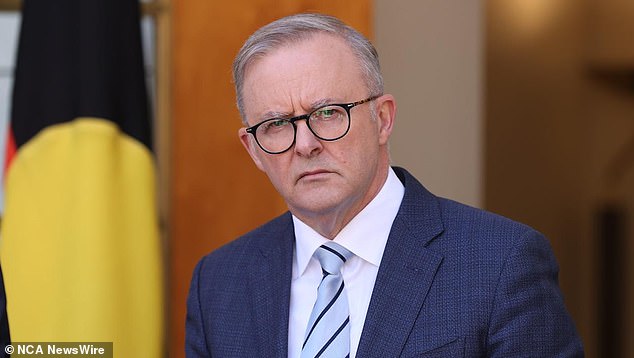 According to some experts, Anthony Albanese is taking a risk by bringing the national indigenous vote to Parliament

The Prime Minister refuses to consider any option other than a successful referendum.

In doing so, he refuses to be resorted to as to whether a failed constitutional vote would mean he would consider legislation by a voice body anyway.

Mr Albanese went so far as to say that the merging of the two is like comparing rugby league and rugby union.

“I’m committed to doing what I can, along with so many other Australians who will campaign for a yes vote from across the political spectrum,” he said this week.

Constitutional law expert Anne Twomey said if the referendum were to fail, there were still ways to legislate a vote – but that would quickly become a “political problem”.

Constitutional law expert Anne Twomey said if Mr Albanese proceeded with legislation over one vote in the event of a failed referendum, it would become a major political issue

“Technically, even if the voice referendum fails, there is still a way to legislate,” she said.

“So you could legislate to ensure that there is an organized mechanism for tribal peoples to voice their views on matters affecting them, but I suspect that would cause difficulties as that is an idea that is on Constitutional level would have been rejected.’

“It would be very difficult for a government to come along and say, ‘We’ll just do it by law’, so there would be a political problem to do that,” she explained.

“But from a legal perspective, racial power still exists in the Constitution – that is the power that allows the Commonwealth to enact special legislation in relation to Indigenous Australians when the need arises.

“So it could still exercise that power through Indigenous Australians making statements or bringing their views into government, but we come back to the issue that if the Australian people have already voted against it at the constitutional level, it’s a political issue. ‘

After urging Mr Albanese to introduce legislation ahead of the referendum, he accused the Prime Minister of being “tricky” for not being clear about his intention to pass a vote if it fails.

“If the constitutional question goes down, if Australians say, ‘Look, I just don’t have the details, I don’t understand what the Prime Minister is talking about’ and they vote against, then the Prime Minister can legislate in Parliament in a heartbeat,” he said Mr. Dutton.

“The Prime Minister is in control, an absolute majority in the House of Commons. He can pass whatever he wants when Parliament resigns.

‘He can get this bill through right away if he wants to.

“But is he telling the Australian public that if you vote ‘no’ in the referendum, he will legislate the next day to introduce it? If that is the case then pass the law now and show Australians how it can work.”

Mr Albanese said his focus will be on passing the referendum in the second half of the year. Image: Delivered/ PMO

Independent MP Kylea Tink of North Sydney said proposing replacement legislation should the referendum fail is a “political tactic” by those trying to “muddle and muddle the conversation”.

“Hasty talk of ‘simple legislation’ is a disingenuous excuse,” she said.

“North Sydney will not fall for the distraction. I am committed to having a positive conversation, conducted with the optimism and courage of my constituents for our country.’

Professor Twomey said Mr Albanese and other Yes activists should focus on convincing Australians to pass the referendum rather than risking the potential political fallout.

Mr Albanese himself acknowledged when unveiling the draft referendum question at last year’s Garma Festival that the referendum was a “high hurdle to overcome”.

History shows that the road to constitutional change is a challenging one.

Of the proposals, only eight received the double majority required for adoption.

Of the 44 reforms, 25 were proposed by left-leaning governments – only one of which was adopted.

The other seven successful referendums were proposed by conservative governments.

On the question of whether the government could consider holding another referendum, Professor Twomey said that while this had happened before, history had shown that holding the referendum again would not necessarily guarantee success.

“It would depend very much on whether the proposal has changed in a way that means people are willing to support it or not,” she said.

“You can’t guarantee that one way or the other.”

A party charter boat hits a buoy in Fremantle Harbour