The woman whose claims led to an LAPD investigation into Armie Hammer for sexual assault is speaking out against the new Discovery+ documentary about the case.

Effie, 26, who has not given her name due to fears of retaliation and harassment, accused Hammer in 2021 of having ‘violently raped’ her.

Hammer has denied the accusations through his attorney and said that all of his sexual encounters have been ‘completely consensual, discussed and agreed upon in advance and mutually participatory.’

She believes the filmmakers, Elli Hakami and Julian Hobbs, are doing more harm than good.

Effie tells the LA Times that ‘the way they’ve been exploiting my trauma is disgusting. When I keep screaming ‘no’ and they keep going, saying they don’t need my permission, they remind me of Armie.’ 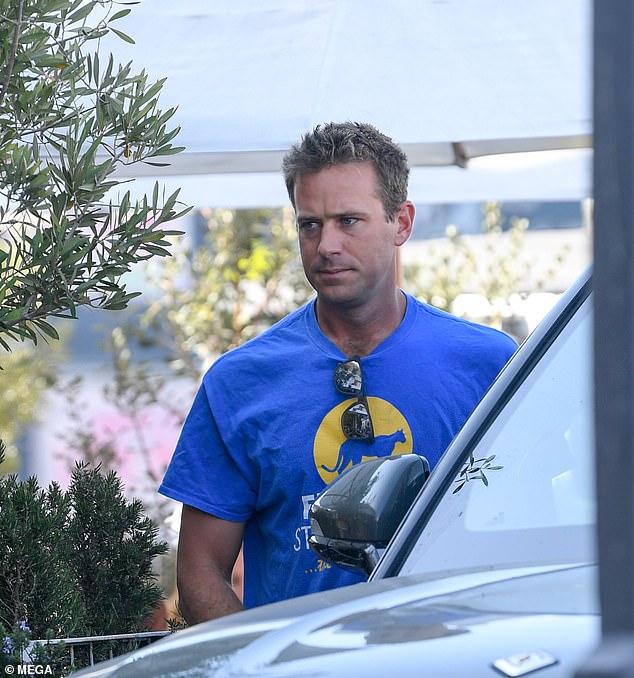 She’s also not happy that her attorney, longtime feminist lawyer Gloria Allred, did not tell her she herself was going to participate

She’s also not happy that her attorney, longtime feminist lawyer Gloria Allred, did not tell her she herself was going to participate.

She did not comment directly on Effie’s claim, citing attorney-client privilege.

Effie claims the producers asked her to consent to an interview for the project. She declined, calling it ‘extremely inappropriate’ and saying it was an attempt to ‘exploit’ a tragedy.

‘Effie is the only one in our film who has a standing [investigation] against Armie Hammer,’ Hakami and Hobbs said.

‘So I think it was an editorial decision to allow that to play out and not get involved in something that the LAPD is still investigating.’

When questioned about using her screenshots and press conference interviews, they said it was covered by numerous outlets and therefor fair game for use.

Hobbs said: ‘Even though Effie wasn’t there in person being interviewed, she’s clearly posited in the film as the match that lit the fire.’

When asked about her reaction, Hobbs added: ‘If you track her, that’s the way she conducts her social media presence, and we don’t want to say, ‘You cannot do this.’ She has a right to do what she wants to do. The people who are participants in the film are very proud of the work that they’ve done in it. They’re doing press for it. For them, it was a good experience.’

Hobbs added that they don’t share Effie’s view and say they ‘have an obligation’ to tell these stories.

The new ‘House of Hammer’ docuseries, produced by Discovery+ and Hammer’s aunt Casey, concluded on Friday as it expands on the alleged dark history of the Hammer clan.

An anonymous source who worked as an assistant to the actor also claimed Hammer forced him into a strip club at 10 a.m. to get him a lap dance, which the employee was uncomfortable doing.

‘I was very against it, I didn’t want to do it. He made me believe that I had no choice. I could’ve walked away, but I was scared of the stature of it all.’

The man also recalled one instance when Hammer drove through a residential area at 140 mph while ‘inebriated.’

The documentary also dives into the alleged corrupt and ruthless nature of family patriarch Armand Hammer, whose former media consultant dubbed him ‘the most satanic man’ of the second half of the 20th century.

The documentary is the latest chapter in the unravelling of the former Hollywood A-lister whose career was felled in 2021 by sexual assault allegations and an ensuing investigation from the Los Angeles Police Department that led him to spending months in the Cayman Islands as a timeshare salesman.

The documentary features the generational sins of the Hammer clan as recounted by the disgraced actor’s aunt, Casey (pictured) who came forward with her stories following the claims against her nephew

‘This is going to be the bet: If I won, I get to come over to your house with my bag of goodies. Inside my bag of goodies, there are several different bundles of Shibari rope; Shibari is the Japanese art of rope bondage,’ Hammer says in the recording.

‘My bet was going to involve showing up at your place and completely tying you up and incapacitating you, then being able to do whatever I wanted to every single hole in your body until I was done with you.’

In the episode, Courtney Vucekovich, of Dallas, recounts her relationship with Hammer, saying it felt like a ‘fairy tale’ before things took a dark turn.

‘It was something that has never been done to me,’ Vucekovich said, refusing to elaborate. ‘It’s very degrading and very belittling. I don’t like to put it out there.’

On another road trip, she claims she suffered bruises and injuries from being tied up by Hammer.

‘He puts on this creepy playlist and just, like, the ropes were around [my] neck, wrists, ankles and behind [my] back. I had bruises. I hated it,’ she said. ‘I understand that if this is your fantasy, if this is your thing, more power to you. I didn’t like it.’

Also appearing in the episode was Julia Morrison, a model and actress, who said Hammer contacted her on Instagram after she posted a photoshoot picture of her being choked.

‘I’ve wanted to tie you up since I saw those goddamn pictures and messaged you about it,’ Hammer allegedly wrote.

‘I haven’t really digested this one,’ Morrison says flipping through her phone and reading aloud a text from Hammer, ‘I have a fantasy of having someone prove their love and devotion and tying them up in a public place at night making their body free use. And seeing if they will f*** strangers for me.’

Vucekovich and Morrison also share text messages they say Hammer sent, describing more violent sexual fantasies he wanted them to play out – including the infamous ‘I’m 100% a cannibal’ text.

Hammer also allegedly told the  he wanted to remove their ribs, barbecue them and eat them.

Paige Lorenze, who was in a relationship with Hammer, also accused him of slicing the letter ‘A’ into one her thigh before sucking the blood out of her fresh wound.

‘He’s obsessed with meat,’ she said. ‘I brushed it off but I do believe that he was serious.’

Hammer has repeatedly denied any wrongdoing and claims that all his previous relationships were consensual.

A series of texts Hammer sent to one of his accusers. It was anonymously shared in 2021 when he was first accused. It is unclear who he sent it to

A brochure featuring Hammer as a concierge at the Morritt’s resort in Grand Cayman. Hammer has said the brochure is fake

The second and third episode go further into details about Casey Hammer’s claims against her family, who she said perpetuated a history of violence that ultimately affected her nephew.

Casey, the sister of Hammer’s father who became estranged after she was mostly ignored by in her grandfather’s multi-million-dollar will in 1990 – reported to be worth about $800million – said violence runs in the family.

‘On the outside we were a perfect family. But magnify Succession a million times, and it as my family,’ she said, ‘If you believe about making deals with the devil, the Hammers are top of the totem pole.

Hammer’s great-grandfather and namesake, Armand Hammer, made millions in the oil industry but left his family deeply divided in his 1990 will, which favored some and slighted others.

Hammer’s father, Michael, was inherited the bulk of the fortune, while Casey and her father received $250,000 and $500,000 respectively.

Violence and scandal has plagued the family throughout its stories history, with Armand  being convicted of manslaughter in 1920 over a botched abortion he tried to administer, and Hamer’s grandfather, Julian, killing a man in 1955 over a gambling debt. He dodged those charges by claiming self-defense.

Armie Hammer as a child being held by his great grandfather Armand Hammer. His father, Michael Hammer, crouches to the right

Pictured: Armie Hammer with his father Michael Hammer, who received the bulk of his grandfather’s $40 million inheritance while his father and sister were snubbed

Somewhat ironically, director Luca Guadagino and co-star Timothee Chalamet from Hammer’s star turn in Call Me By Your Name are set to release a film about cannibalism called Bones and All.

‘I realized this afterward when I started to be told of some of these innuendos on social media.’

He added: ‘Any link with anything else exists only in the realm of social media, with which I do not engage.’