Rambo is at war again.

It has been almost 18 months since Aaron Ramsdale took a kick for having the audacity to join Arsenal – red on red that followed the England goalkeeper’s £30m move from Sheffield United and sinister threats to his safety included. Then on Sunday, after arguably his best performance under Mikel Arteta, the attacks turned physical.

Police will deal with the Tottenham supporter who climbed onto the pitch and booted Ramsdale at the end of an emotional derby in north London. Luckily for the 24-year-old, the attack left little permanent damage: only a “sour aftertaste”. 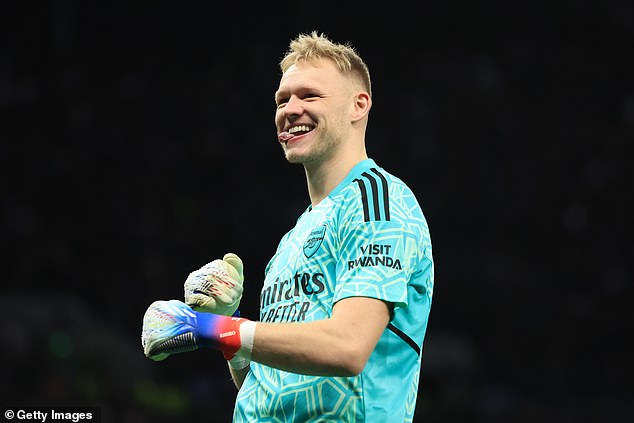 He amassed seven saves against Spurs, the most he’s made in a league game this season

The Arsenal goalkeeper celebrated quickly after the final whistle after his triumph over Tottenham, punching the air in front of Richarlison

Tensions boil over as the full-time whistle blows at Tottenham Hotspur Stadium 😳 pic.twitter.com/iYppuJ6dyM

The best treatment for this? A quick look at the table which shows Arsenal are now eight points clear of Manchester City. And the statistics. Ramsdale amassed seven saves against Spurs, the most he’s made in a Premier League game all season.

The 2-0 win strengthened Arsenal’s grip in the title race and put the spotlight on Hugo Lloris, whose mistake put the visitors on course for victory. Ramsdale’s performance also provided a useful reminder after a tumultuous 24 hours in north London: sometimes, from the rubble of a failed transfer, other diamonds can emerge.

Arteta insisted he would not let the attack on Ramsdale dampen his day. His side, meanwhile, did their best to snuff out the ghost of Mykhailo Mudryk, who was snapped up by Chelsea just ahead of Sunday’s derby.

The winger was Arsenal’s top target and after months of behind-the-scenes work, all signs pointed to a deal with Shakhtar Donetsk. Last Friday, a deal (worth up to £80million) seemed close. Arsenal’s confidence was stunted in part by the Ukraine international appearing to be on the move.

The talks have not been easy – Shakhtar rejected two offers from Arsenal and the Ukrainian club privately reiterated what had been made public: their £88m valuation was determined by Jack Grealish’s move to Manchester City and Antony’s move to Manchester United. Arsenal wouldn’t go that high. Not with such obvious mitigation: Grealish had plenty of Premier League experience and Ajax had – to put it politely – made a tough deal with Antony. Mudryk, meanwhile, had played less than 50 senior games for Shakhtar.

Arteta wanted reinforcements in early January but the club were willing to go the distance. After all, Shakhtar have a habit of looking after their players.

The waters have been further muddied by Shakhtar’s league woes as they face a battle to qualify for next season’s Champions League. That meant weighing the benefit of monetizing Mudryk versus the cost of losing the best player.

The Ukrainian club also fell through in their bid for €50m in compensation from FIFA after emergency transfer rules allowed foreign players and coaches to suspend their contracts during the Russian invasion.

And then there was Chelsea, who with Todd Boehly at the helm have become rather – shall we say – unpredictable in the transfer market. They had long threatened to derail Arsenal’s plans.

There was little excitement in north London when Shakhtar’s director of football Darijo Srna showed up at a box at Stamford Bridge earlier this month. Arsenal have primarily dealt with CEO Sergei Palkin.

However, when Srna reappeared at Chelsea with Mudryk in tow on Sunday, Arsenal had conceded defeat. They would not fulfill Chelsea’s £88m offer. Even if £20.5m will now help Ukrainian soldiers and their families. Arsenal have never been interested in a bidding war.

They had already backed away from a potential deal for Joao Felix when they saw the loan fee. He too ended up at Chelsea for £9million.

Last summer, Arsenal gave up a move for Lisandro Martinez after deciding the numbers didn’t add up. Instead, they have signed Oleksandr Zinchenko, who has helped transform Arteta’s side alongside Gabriel Jesus. The Brazilian only arrived after the Gunners failed to replace Pierre-Emerick Aubemayang last January.

Ramsdale signed a year after Arsenal tried unsuccessfully to sign Brentford goalkeeper David Raya. Despite initial mutiny among fans, despite early shock at Arsenal’s demands, despite shaky performances this season, the England international is a key member of Arteta’s squad. His willingness to return fire when opponent fans hand him stick has endeared him to Arsenal fans, while his performances have been understood to have put him in line for a new deal.

All of this should reassure the fans: Arsenal can cope with setbacks in the transfer market. So, having missed Mudryk and Felix, where should they turn now? They have been linked to Leandro Trossard – who wants to leave Brighton – and Raphinha. Sporting director Edu is close to the Brazilian’s agent Deco and Arsenal eyed the former Leeds winger last summer only to walk away when it became clear he wanted to join Barcelona. Elsewhere, Arsenal are interested in Real Valladolid right-back Ivan Fresneda, 18, and Sportsmail said the Spanish club want around £13m.

Further ahead, reinforcements seem to be more urgently needed. But Arteta has insisted Arsenal won’t sign the wrong player. They’ve also counted overpayment costs in the past – most obviously with £72m Nicolas Pepe.

“We want to improve our squad in this transfer window,” Arteta said on Sunday when asked about Mudryk. “But we will make the deals that we can make and that we think is right for the club.”

And Arsenal can return to the drawing board, knowing that a second look is often valuable.

Who is Matteo Messina Denaro? Cosa Nostra boss was dubbed The Devil 'murdered 50'