‘You know Xhaka is going to do something stupid making Arteta work like that!’: fans react with amusement as Arsenal manager chases after the midfielder to prevent him from clashing with Tottenham players after a full-time riot

Spectators were left in hysterics as they watched Arsenal manager Mikel Arteta chase Granit Xhaka to prevent him from clashing with Tottenham’s players after Sunday’s big win.

Arsenal overcame local rivals with a 2-0 win at Tottenham Hotspur’s Stadium, a Hugo Lloris own goal and a fine goal from Martin Odegaard making the difference.

Things turned sour after the game as goalkeeper Aaron Ramsdale came on with Richarlison before being hit by a Spurs fan. 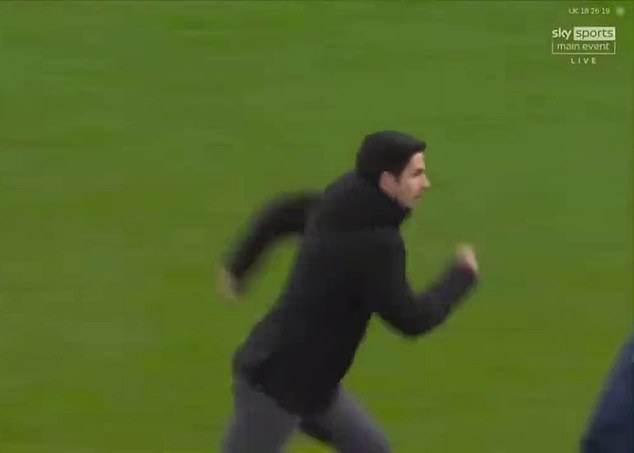 This causes both groups of players to interfere, forcing Arteta to come and drag his players away.

He thought he had succeeded before seeing the famously hot-headed Xhaka return to do more.

Arteta could clearly imagine what was going to happen next and ran after the midfielder, tugging him away with a smile.

The video quickly made the rounds on social media, with fans expressing their amusement.

“Love how Arteta chases Xhaka to keep him from fighting everyone,” one wrote, while another tweeted, “You know Xhaka will do something stupid if he makes Arteta work like that.”

“Nah, that’s been killing me for a few hours,” quipped another. “Everyone has a friend like Xhaka.”

https://www.dailymail.co.uk/sport/football/article-11638649/Arsenal-manager-Mikel-Arteta-chases-Granit-Xhaka-stop-clashing-Tottenham-players.html?ns_mchannel=rss&ns_campaign=1490&ito=1490 Arsenal manager Mikel Arteta is chasing after Granit Xhaka to prevent him from clashing with Tottenham players