Arsenal are planning a shock loan move for Eduardo Camavinga with Mikel Arteta, who want to temporarily sign the talented youngster from Real Madrid to help the Gunners title search, while West Ham’s Declan Rice keeps the club’s summer No. 1 target in midfield remains

Arsenal are reportedly interested in a surprise loan deal for Eduardo Camavinga from Real Madrid.

According to the Evening Standard, the Gunners are looking to bring in the midfielder on a temporary basis to aid their push to the Premier League title.

Camavinga joined Real in 2021 but the 20-year-old has not been a regular in LaLiga this season. 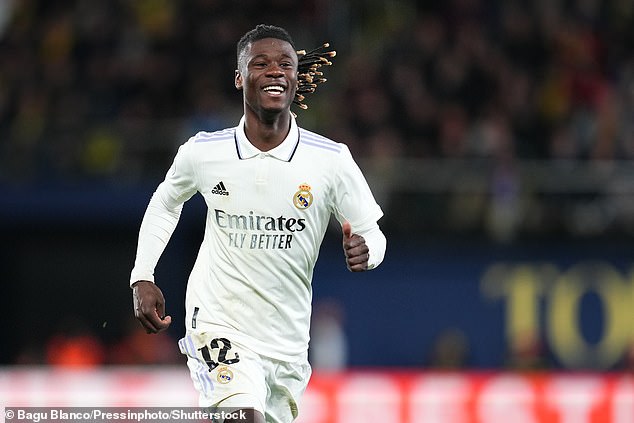 With his flair and technical ability, Camavinga could be a good fit for Mikel Arteta’s side as the Spaniard looks to add depth to his squad for the second half of the season.

It is currently unclear whether Real Camavinga will leave the club on loan.

Arsenal have already secured the signing of Brighton winger Leandro Trossard for £27million, while Poland defender Jakub Kiwior is ready to join from Spezia.

The Gunners are looking to bolster their midfield significantly in the summer, with West Ham star Declan Rice their primary target.

Arsenal missed out on a move for Mykhailo Mudryk, who instead joined Chelsea from Shakhtar Donetsk for £88million.

Arteta’s side have had an excellent season so far and currently sit five points clear of Manchester City at the top of the Premier League, with a game in hand against their closest challengers.