Manchester United’s trip to the Emirates Stadium on Sunday afternoon promises to be one of the clashes of the season.

Two of the world’s biggest clubs facing off in a potential Premier League title clash – both teams rejuvenated and playing an exciting brand of football under top quality managers – there’s nothing quite like it!

Perhaps bizarrely, despite their illustrious histories and seeming hegemony at the top table in English football – this is the biggest Arsenal vs Manchester United league clash in 15 years – with the last time both sides faced each other when competing for the title all the way back in 2008. 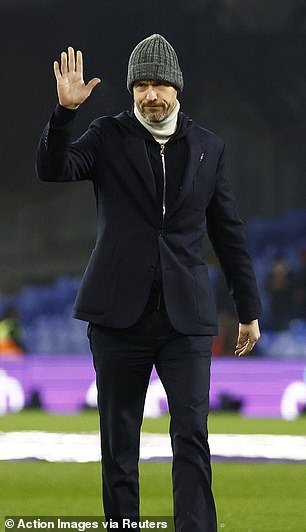 In the 2007-08 season, United edged Arsenal out 2-1 in a high-tempered clash at Old Trafford to go six points clear with four games to go in April 2008, as Sir Alex Ferguson’s side went on to win the second of what would be three titles in a row between 2007 and 2009.

What has followed since that season saw both teams continue their dominance near the top of English football – before a large-barren period with Arsenal and United plunging to new depths – until a renaissance under Mikel Arteta and Erik ten Hag which has led to this Sunday’s encounter in north London.

In light of this, Sportsmail takes a look at what is no doubt the biggest Arsenal vs United clash in the Premier League since April 13 2008.

Heading to Old Trafford, the air was full of tension as the 2007-08 Premier League season was drawing to its conclusion.

Arsene Wenger’s Gunners arrived and the task was simple. They were three points behind Sir Alex Ferguson’s side, and level on points with Chelsea.

This game was effectively a title shootout – lose and the Premier League would largely be in United’s hands – win, and Arsenal would be level with the Red Devils and firm favourites with only fixtures against Reading, Derby, Everton and Sunderland to come.

A quick look at the teamsheets and the quality on display was obvious with stars such as Paul Scholes, Cristiano Ronaldo, Rio Ferdinand and Wayne Rooney lining up for United, while Arsenal could call on Jens Lehmann, Cesc Fabregas, Gilberto SIlva and Robin Van Persie.

The Gunners started brightly, creating a whole host of early chances, but they were wasteful as United looked nervous.

A 20-year-old Cesc Fabregas pulled the strings in midfield alongside Alexander Hleb, with Emmanuel Adebayor guilty of missing a whole-host of chances as the game was level at half-time.

However, the Gunners didn’t have to wait long to assert their dominance in the second half as Adebayor opened the scoring.

It wasn’t without controversy, as the striker appeared to bundle the ball in with his arm, leading to a fractured second half with seven yellow cards being distributed by Howard Webb.

United were quick to respond, showing the mentality Ferguson had built in his side, as William Gallas inexplicably handled Owen Hagreaves’ cross into the box.

Cristiano Ronaldo – who would go on to score 31 goals in 34 Premier League games in the season and win his first of five Ballon d’Ors – stepped up, and scored at the second attempt after his first penalty was ruled out for encroachment, demonstrating his elite mentality.

‘Wasn’t that some effort from Ronaldo to tuck it away second time around, with all that pressure?’ Ferguson later said. ‘It was a fantastic penalty and he showed great courage and great ability to stick it away.’

United now had all the momentum and Ferguson sent on Carlos Tevez and Anderson in reserve, with Wenger making his move by bringing on Theo Walcott.

Both teams exchanged blows as Tevez flashed an effort narrowly wide, before Gael Clichy had a cross deflected onto the post by Edwin Van der Sar in an enthralling clash.

But then, with 72 minutes on the clock, Patrice Evra was fouled and Owen Hargreaves stepped up.

The former Bayern Munich star was 25 yards out but showed all of his quality to guide the ball over the wall and into the corner of Lehmann’s net to send Old Trafford into raptures.

Arsenal pushed for an equaliser with Van der Sar making a good save from Nicklas Bendtner late on but United held on and had one hand firmly on the Premier League trophy.

‘We are out of the title race of course, we know that. We played with quality and spirit, but what can you do about the result now?’, said a deflated Arsene Wenger post-match

‘We had plenty of chances and I feel we were very unlucky not to win the game, but we have to accept what happened.’

Meanwhile a jubilant Ferguson would acclaim: ‘If we win at Blackburn and at Chelsea we’re champions. We’ve got over a nervous day.

‘I thought it was a fantastic game, absolutely outstanding. You won’t see a better game anywhere this season.’

United would in fact go onto draw with Blackburn, before losing to Chelsea, to ramp up the pressure.

Arsenal meanwhile won all four of their remaining games and Chelsea picked up 10 points, but United held their nerve as they defeated West Ham and Wigan in their final two games to win their 17th top flight title by two points over the Blues and four ahead of the Gunners.

The clash that year was testament to the rivalry that developed during the first two decades of the Premier League.

United vs Arsenal matches became one of the defining features of the top flight as Wenger and Ferguson locked horns, with Patrick Vieira and Roy Keane two players to personify the many dramatic clashes.

Leaving Old Trafford that day, you would have perhaps thought their battles would remain the norm during the next 15 years but both sides have struggled to regularly reach the heights since.

United did maintain their position at the top of the table for a while after 2008, winning the Premier League in three of the next five seasons until Ferguson retired in 2013.

Arsenal meanwhile continued to qualify for the Champions League, as they finished in the top four for the 20th consecutive season in 2015-16.

However, both clubs had started to decline – with Arsenal dwindling towards the back end of the Wenger era – while United had struggled to deal with Ferguson’s retirement.

At Old Trafford, David Moyes, Louis van Gaal, Jose Mourinho, Ole Gunnar Solskjaer and Ralf Rangnick have all been-and-gone in attempts to get the Red Devils back to the levels they reached under Ferguson.

Both United and Arsenal have struggled over recent years, with the Gunners enduring a slow decline towards the end of the Arsene Wenger before he left the club in 2018

However, they have only finished in the top four in four of the subsequent nine seasons, with the closest United have come to the title being their second place finish in 2020-21, when they came 12 points behind Manchester City.

It hasn’t been much better at the Emirates, as following their 20 successive years of the top four ending in 2016, they haven’t finished in the Champions League places in any of the last six seasons – even ending up eighth in 2019-20 and 2020-21.

Wenger struggled to turn around the decay that set in, while despite Unai Emery’s best efforts, it has been a tough watch for Arsenal fans over recent years.

The lack of Champions League football for both sides seems remarkable given their illustrious history in the top flight and their several iconic battles down the years, shaped by the two legendary managers.

In truth, it’s been a struggle for both teams on the whole over recent years, with clashes between the sides at best just an important fixture in the battle to reach the top four – a far cry from their numerous title clashes over years gone by.

These aforementioned struggles make it even the more impressive that we are talking about a title clash this Sunday, with United now a credible challenger to top of the table Arsenal along with their Manchester rivals, City.

It has been a slow rebuild at the Emirates ever since Arteta replaced Emery in December 2019.

Despite an FA Cup win in the summer of 2020, the Spaniard could only help the Gunners to muster an eighth-placed finish, which they replicated the following year.

They seemed certain to qualify for the Champions League last season, before a late collapse cost them as they finished fifth.

Yet, after a slow building progress that has seen fans calling for Arteta’s head in recent seasons – his side are extremely impressive – and looked every inch the title contenders in Sunday’s assured 2-0 win over Tottenham in the hostile environment of an away north London derby.

After a slow building process, Arsenal are flying and are finally looking like title challengers

Arteta has built a vibrant, attacking team around a young core of players, with a solid defence

Arteta has built a vibrant, attacking team and one that has conceded just 14 goals in 18 Premier League games and with an eight-point lead – along with Man City, Liverpool and Chelsea all faltering this season – they are now firm favourites to win their first league title since 2004.

After taking over from interim boss Ralf Rangnick – who claimed at the end of his tenure last season that the club needed ‘open heart surgery’ – the Dutchman has converted them to the point where we are talking about United as credible title challengers after just 29 games in the hotseat.

Strong summer recruitment, along with developing a well-balanced side that has seen them concede just three times in eight games, and it finally looks as if United have found the manager to bring the good times back to the club.

With one loss in 20 in all competitions, and still competing on four fronts, there is significant optimism at Old Trafford that this could be the year United end their six-year trophy drought.

Arsenal will be out for revenge after their only loss this season came at Old Trafford in September when United emerged 3-1 victors.

But, as both sides head out on to the pitch at 4.30PM on Sunday, we are set to be treated to a potentially season-defining game and no doubt another enthralling clash between two burgeoning sides.

It feels as if Arteta and Ten Hag are both in it for the long run – and while managers are never more than a few games away from being under pressure – let’s hope this Sunday is the start of another iconic rivalry between two great United and Arsenal sides, akin to the Wenger-Ferguson clashes of the 1990s and 2000s.

Whatever happens, this is for sure the biggest Premier League game between both sides since that jubilant day for the Red Devils in April 2008.

https://www.dailymail.co.uk/sport/football/article-11652929/Arsenal-vs-Manchester-United-biggest-Premier-League-clash-teams-2008.html?ns_mchannel=rss&ns_campaign=1490&ito=1490 Arsenal vs Manchester United is the biggest Premier League clash between the teams since 2008

Release date of the return PC