Blooper, mascot of the Atlanta Braves, stiff arms three kids and shows no mercy by breaking their offensive line for a sack in halftime entertainment…since he takes football games far too seriously

Atlanta Braves mascot Blooper treated a halftime game at Mercedes-Benz Stadium on Saturday like a tryout, beating his small opponents and firing one while the Falcons waited to resume play.

Blooper was part of a mascot pewee game meant to provide some light halftime entertainment and well he certainly entertained.

The furry mascot stiff-armed three kids at one point during a long run, knocking them down with just over six minutes left on the clock.

At another point, Blooper sagged his opponent’s diminutive quarterback on a potential run play, falling on top of him before he could even pass the ball.

He celebrated the game by proudly patting his chest not far from the child he had just attacked. 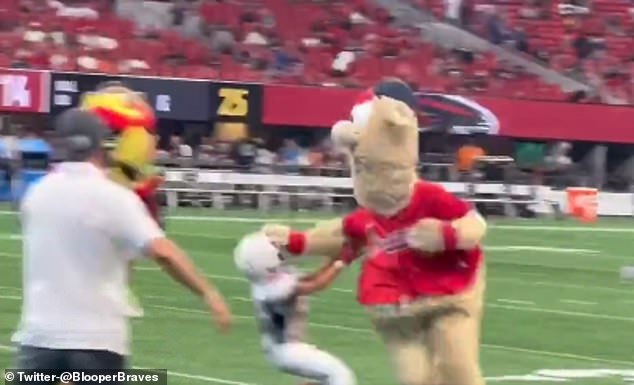 The overly aggressive performance occurred during halftime of a preseason game between the Falcons and Jaguars.

If the Falcons decide to enlist Blooper’s services, he will make his pro debut against the Saints in Week 1.

https://www.dailymail.co.uk/sport/sportsnews/article-11157561/Atlanta-Braves-Mascot-Blooper-stiff-arms-kids-shows-no-mercy-takes-game-seriously.html?ns_mchannel=rss&ns_campaign=1490&ito=1490 Atlanta Braves mascot Blooper gives kids stiff arms and shows no mercy because he takes the game too seriously

Three months after his death at the age of 67, Ray Liotta's fiancee Jacy Nittolo is getting a new tattoo