An Australian teacher has been found guilty of murdering his wife 40 years ago while having an affair with his teenage student.

Christopher Dawson, 74, was convicted in the judge-only trial of killing wife Lynette in January 1982, after the hit true crime podcast series Teacher’s Pet triggered renewed public interest in the case.

A 2003 inquest had recommended charging Christopher Dawson with his wife’s murder but prosecutors declined, citing a lack of evidence. 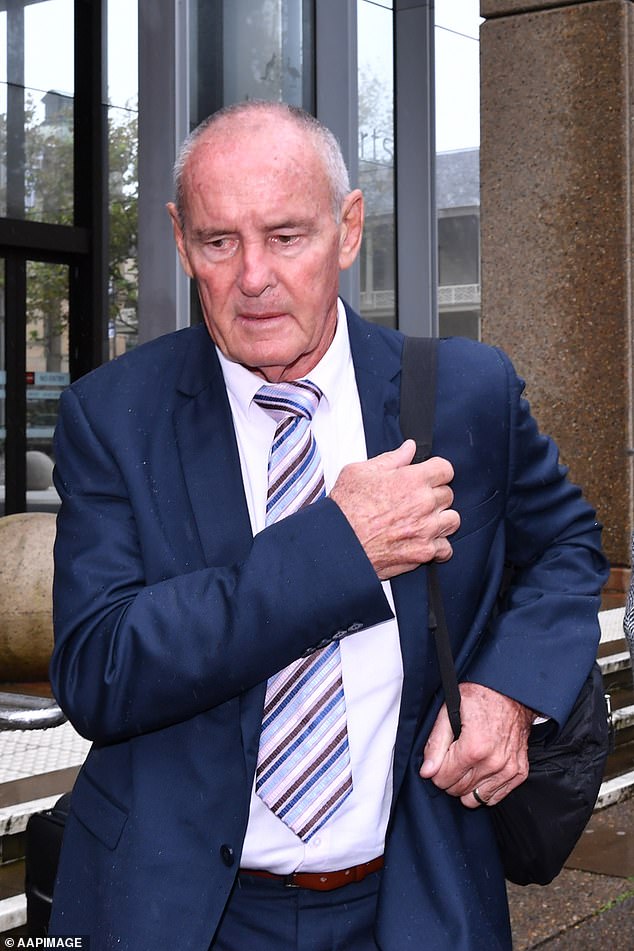 Today, Supreme Court judge Ian Harrison found Dawson deliberately killed his wife to pursue a relationship with a teenage student he was having an affair with, known as JC, and who had babysat and lived in his Sydney home.

JC told the court repeatedly Dawson had ‘groomed’ her, then ‘installed’ her in the house and the marital bed, where she became ‘a sex slave’, as well as housekeeper and mother to his two daughters, before a divorce.

Lynette’s body has never been found and Dawson has maintained his innocence, saying she left him and subsequently telephoned him to say she needed space, but the judge called his defence fanciful and riddled with lies.

The judge noted there was no record of Lynette contacting family or friends since her disappearance, nor of making credit card payments or working.

Dawson’s lawyer, Greg Walsh, told reporters outside court that his client would appeal the conviction.

‘I can confirm that it’s probable of course that he will appeal against his conviction,’ he said outside of court.

‘Mr Dawson has always asserted, and he still does, his absolute innocence of the crime of which he’s been convicted.

Dawson deliberately killed his wife to pursue a relationship with a teenage student he was having an affair with (pictured together), court ruled

Teacher’s Pet podcaster Hedley Thomas said outside the court that he did not think Chris Dawson would acknowledge his guilt for murdering Lynette, but that he hopes he would eventually and lead them to Lyn’s remains.

The journalist made the award-winning podcast about her disappearance

He said prosecutor’s had done ‘an incredible job with what was a wholly circumstantial case.

‘A lot of criticism has been properly made of the police investigation. (Lyn) was treated as a runaway… in conditions that were so suspicious,’ he said.

He said if Lynnette Dawson vanished today there’d be ‘a very strong focus on the spouse’.

He said Chris Dawson would ‘struggle in jail … but he’s had 40 years of freedom.’

‘And he will continue to assert that innocence. And he’ll certainly appeal.’

Police charged Dawson with Lynette’s murder in 2018, four months after the final episode of Teacher’s Pet, which criticised the law enforcement response to her disappearance and featured multiple witness interviews.

Harrison, the judge, noted that the case against Dawson had been wholly circumstantial since Lynette’s body had never been found and there was no known cause, location or exact time of death.

But the combination of small pieces of evidence, including inconsistencies in Dawson’s defence, was persuasive and compelling, he said.

‘I am left in no doubt, I am satisfied beyond reasonable doubt, that the only inference is that Lynette Dawson died … as a result of a conscious and voluntary act by Mr Dawson with the effect of causing her death.’

When police reopened their investigation they said only that it was because new witnesses had come forward, but media reports said law enforcement sources confirmed they were motivated by publicity generated by the Teachers Pet, which has been downloaded 30 million times.

Dawson’s defence argued that the podcast, produced by News Corp’s The Australian newspaper, denied him a fair trial because of the way he was depicted.

Harrison agreed the podcast had cast Dawson in a negative light but said he did not factor that into his verdict.

Dawson, who was on bail, was taken into custody while he awaits sentencing.

In his decision, Justice Harrison said that potentially losing JC in early 1982 was a motive for murder: ‘I am satisfied he resolved to kill his wife’, and that there was also the financial motive of potentially losing his investments.

‘The evidence does not reveal how he killed Lynette Dawson, nor where her body is now,’ he said.

He said that the accused told a series of lies about his wife still being alive after her disappearance and about his missing her afterwards.

Lynette’s brother Greg Simms said his sister had been ‘betrayed by the man she loved’, and plead for her killer to reveal where her body is.

‘This is a milestone in our journey of advocating for Lyn, however the journey is not complete, she is still missing,’ he said outside court after the verdict was handed down.

‘We still need to bring her home, we’d ask Chris Dawson to find it in himself to finally do the decent thing and allow us to bring Lynnette home to a peaceful rest, showing her the dignity she deserves.’

Reading through his written reasons for his verdict, Justice Harrison described some of the evidence in Dawson’s defence during the trial as ‘fanciful, absurd and lies’.

‘I am satisfied beyond reasonable doubt Lynette Dawson never telephoned Christopher Dawson after 8 January 1982 and … that she did not leave her home voluntarily,’ Justice Harrison said.

Dawson was described during a summary of the crown case by His Honour as ‘an unfaithful and violent man’.

The judge also said one of Dawson’s relatives, his brother-in-law Ross Hutchins, had falsified an alleged sighting he had made of Lynette at Gladesville, just months after her disappearance, and that the sighting was a ‘fabrication’.

Discounting all other alleged sightings, His Honour said: ‘I am satisfied that none of the sightings were genuine.

‘She was not mentally unstable, she adored her children…she was still hopeful. She was still talking in affectionate terms about her unfaithful husband.

‘That she would step from her husband’s car … and decide to evaporate forever is not a reasonable possibility. The proposition is ludicrous.’

Justice Harrison also found that Dawson’s accounts of purported phone calls from his wife after her disappearance ‘beyond reasonable doubt … are lies’.

Dawson has been found guilty of murdering his wife Lyn

Chris Dawson with his daughter in the 1970s, when he was married to first wife Lynnette a few years before her mysterious 1982 disappearance

The judge described the evidence of the schoolgirl babysitter JC, with whom Dawson had an affair as mostly reliable, and that her account of being groomed for a sexual relationship as believable.

Dawson gave JC secret love notes when she was a schoolgirl half his age, and he later violently ripped off her G-string and left her ‘fearing for her life’.

Speaking in a strident and at times angry voice, the onetime babysitter to Dawson’s children – who slept in his wife’s marital bed days after she was murdered – defiantly refused to accept she was anything other than a ‘groomed’ child.

At times, JC just gave Dawson’s lawyer Pauline David’s pointed suggestions about her intentions toward Dawson in the early 80s a forceful ‘NO’.

At other times JC made scathing suggestions about Dawson’s pursuit of her as a schoolgirl.

She described the romance between 32-year-old teacher Dawson and 16-year-old student JC as a ‘relationship’ and asked her if Dawson was like a boyfriend to her.

But JC countered: ‘It wasn’t a relationship. I object to that … I was a child!’

‘The grooming process started very early on in 1980 – I suppose he felt like a boyfriend even though he was twice my age – it wasn’t an equal partnership, it was a power imbalance.’

Ms David asked: ‘You wanted an exclusive relationship (with Dawson)?’

JC replied: ‘I wanted him to leave me alone.’

The judge said that Dawson’s contention that his sexual relationship with JC did not recommence in 1982 until April of that year ‘cannot be true’.

‘She had been swept up … and was confused and conflicted,’ he said and found that JC’s evidence had not been corrupted by her subsequent divorce from him years later.

However Justice Harrison rejected the evidence of JC, and of a former football team mate Robert Silkman, that the accused had conversations with them about hiring ‘a hitman’ to murder Lynette.

He added he found the account by Lynette’s next door neighbour, Julie Andrew, of seeing Dawson pushing Lynnette up against a trampoline and screaming at her shortly before she went missing to be true.

https://www.dailymail.co.uk/news/article-11159953/Australian-teacher-guilty-murdering-wife-1982-having-affair-teenage-student.html?ns_mchannel=rss&ns_campaign=1490&ito=1490 Australian teacher found guilty of murdering wife in 1982 while having affair with teenage student