Heartbreaking images have emerged of a 16-year-old mother and her six-month-old son, who were among six people shot dead at a home in central California in what police described as a “horrific massacre”.

The infant was found in the arms of his mother, Alissa Parraz, in a ditch outside the home in the early hours of Monday morning. Both had been shot in the head as Parraz attempted to flee with her young son.

Authorities are looking for at least two suspects in what appear to be gang-related killings, sheriff’s officers said.

Deputies were responding to reports of multiple shots being fired at the home in Goshen, east of Visalia, around 3:30 a.m., the Tulare County Sheriff’s Office said.

“Actually, the report was that there was an active gunman in the area because of the number of shots that were fired,” Sheriff Mike Boudreaux told reporters. 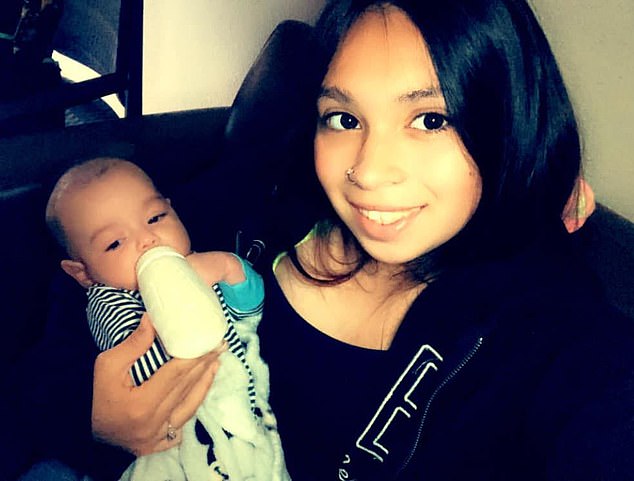 The child was found in the arms of her mother, Alissa Parraz, in a ditch outside the houses

Police said the killings were targeted. The baby and his mother tried to escape when they were each shot in the head

Alissa Parraz, one of the six people found shot dead, had posted about her pregnancy online

MPs found two victims dead in the street and a third fatally shot in the doorway of the residence, Boudreaux said.

Three other victims were found inside the home, including a man who was alive but later died in a hospital, he said.

The sheriff said investigators were looking for at least two suspects but had not released the victims’ identities or descriptions.

Two people survived by hiding in a trailer on the property.

“You could see two men sneaking onto the property … but when they arrived [the video feed]”It was too late to do anything else,” the sheriff said.

Tulare County Sheriff’s officials say six people, including a 16-year-old mother and her 6-month-old baby, were killed in a shooting at the central California home early Monday

They believe there is a gang connection to the murders. The sheriff’s office executed a narcotics-related search warrant at the residence last week, Boudreaux said.

“We also believe that this was not an accidental act of violence. We believe this was a targeted family,” he said.

“Investigators believe there are at least two suspects. It appears that this family has been targeted and that gang associations and potential drug investigations are involved.

“I think it has a special connection to the cartel. The level of violence…this was no ordinary, humble gang member,” Boudreaux explained.

“I have more information, but I don’t have the liberty to speak about it at this point,” Boudreaux said. “We have potential information that will hopefully lead to potential suspects.”

“A week ago, TCSO detectives executed a narcotics search warrant at the victim’s home,” added a spokesman.

“I think it has a special connection to the cartel. The level of violence … that wasn’t your run-of-the-mill, low-end gang member,” Sheriff Mike Boudreaux told reporters

Two of the victims, the young mother and her child, were shot in the head, the sheriff said.

Samuel Pina said Monday that his teenage granddaughter Alissa Parraz and her baby Nycholas Nolan Parraz were among those killed.

“I can’t imagine what kind of monster would do that,” he said.

Pina said that Parraz and her baby lived with the paternal side of the family in Goshen and that her father’s uncle, her father’s cousin, and her grandmother and great-grandmother were also killed.

According to ABC, at least one of the elderly women was murdered in her sleep.

DNA testing is needed to identify at least one of the men because his face was damaged by the gun or weapons used, the sheriff said.

He said the family is in shock. “It’s coming in big waves,” he added.

Goshen is a semi-rural, mostly Hispanic community of about 5,000 people located 35 miles southeast of Fresno in the agricultural San Joaquin Valley.

“These senseless acts of violence, particularly against infants, children and young adults, have no place in our communities,” Valero said in a statement.

Tulare County, a small agricultural region with a population of less than half a million, has historically played a significant role in the transnational drug trade, transporting drugs from Mexico to various markets in the United States.

Bisected by the 99 Freeway and boasting a limited law enforcement presence, acres of open land, and a highly mobile population of farm workers, the county has been a haven for drug dealers since at least the 1970s.

In recent years, the area has also become known for methamphetamine production and the cultivation of legal and illegal marijuana.

Notable and violent figures in Mexico’s drug wars, such as former Zetas Cartel leader Jose Maria Guizar Valencia, have ties to Tulare County, having been born there.

https://www.dailymail.co.uk/news/article-11642573/Baby-boy-shot-head-execution-style-alongside-mom-four-family-members-California-murder.html?ns_mchannel=rss&ns_campaign=1490&ito=1490 Baby boy shot in head in execution-style murder in California along with mother and four other family members