Former NRL player and teacher Chris Dawson has swapped his Gold Coast home for a Sydney jail cell after being convicted of the murder of his wife Lyn more than forty years ago.

Dawson was handcuffed inside the NSW Supreme Court in Sydney on Tuesday afternoon by two corrections officers and taken from the chamber where his family began to cry and protest, and down into the cells beneath the Queen’s Square complex.

Still dressed in his smart navy suit, lilac and navy striped tie and immaculate white shirt, the 74-year-old limped as he was firmly guided across the courtroom with his shackled arms outstretched in front of him at an awkward angle.

His identical twin brother, Paul, yelled out ‘bulls**t’ and protested that he had never been called as a witness during the 10-week long trial for the murder of Lynette Dawson in 1982.

Chris, who did not look like a willing prisoner, spent the night in the bottom of Surry Hills police station in the relative luxury of a ‘one-out’ (single) cell but in a custodial area that is known for its bad food, cockroaches and sometimes even rats. 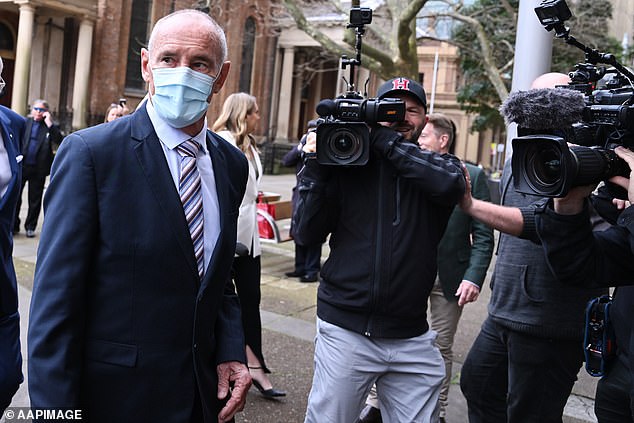 His identical twin brother, Paul (pictured left with their older brother Peter) yelled out ‘bulls**t’ when the verdict was delivered and protested that he had never been called as a witness

While inmates complain about the food in the state’s prisons as being ‘tasteless’, it is gourmet fare compared to what prisoners are reportedly fed at Surry Hills.

This morning, Dawson will be transferred to a Sydney prison, perhaps along with other prisoners locked up overnight from the previous day’s proceedings in courts across the city’s CBD.

These will include prisoners remanded without bail, or convicted like Dawson, and loaded for transport into a white van, which has metal interior walls with fastening points for handcuffs.

The future prison inmates and Dawson – who already has a prison number – will be taken to an induction jail, most likely Parklea Correctional Centre near Blacktown in western Sydney.

Dawson has been in custody previously, at the vast Silverwater correctional complex’s Metropolitan Remand and Reception Centre four years ago.

Dawson – who already has a prison number – will be taken to an induction jail, most likely Parklea Correctional Centre near Blacktown in western Sydney (pictured)

He spent just under three weeks there, after his 2018 arrest and charge for Lynette Dawson’s murder, for which he has just been found guilty.

On that occasion, Dawson was released on bail and returned to his Sunshine Coast home in Queensland, where he lived with his third wife, Sue.

This week, Dawson, with his Master Index Number, or MIN stamped on his prison papers, will be ferried to the holding cells at Parklea for his induction.

There, he will be strip searched by prison officers wearing surgical gloves and will be asked to swap his suit, tie, shirt and shoes for a set of prison greens.

This week, Dawson, (pictured with Lynette) with his Master Index Number, or MIN stamped on his prison papers, will be ferried to the holding cells at Parklea for his induction

Lynette Dawson (above with Shanelle) had found it hard to conceive and doted on her two daughters to Chris Dawson, who were four and two when she vanished in 1982

Dawson’s new clothing will comprise of bottle green track pants and top, t-shirt, and underpants in the same dark green knit fabric, all made by inmates at Cooma jail and other facilities.

He will be photographed for his prison mug shot and given a medical and psychological examination, where health staff will assess whether he is a suicide or self-harm risk, and evaluate the needs of any ongoing physical health problems.

During the 10-week murder trial which culminated in Dawson’s conviction, and in other legal proceedings, he has complained of a fractured hip and of a possible brain injury from his years of playing football.

Dawson will be then taken up through the corridors of Parklea – home to around 1500 prisoners – and placed in a cell with an open metal toilet and shower.

For the immediate future he will likely be a ‘one out’ inmate – that is on his own in the cell – unless it is deemed he needs company.

The cell may be on the protection wing, for inmates who are vulnerable to others because of their notoriety, or any mental health issues, including a fresh custody’s fearful prospect of many years in jail to come.

No sentencing date was set by Justice Ian Harrison when he pronounced Dawson guilty in court, but he could reasonably expect a lengthy term for murdering his wife and may die in jail.

If Dawson is considered a suicide risk, he could be placed in an area where the cells have transparent front doors, so that prison officer may regularly inspect them for signs of self harm.

Murderer Chris Dawson (above) at his Sunshine Coast home on Sunday before he flew to Sydney to face the judge’s verdict of his guilt or innocence in the murder of his first wife, Lynette

Dawson will most likely have been fed a prison dinner while waiting for the van at the Downing Centre, and once processed in jail, be given his breakfast to have in his cell on Wednesday morning.

The meal will consist of slices of bread, milk, jam and cereal in what is known as a ‘breakfast pack’.

As a new inmate, Dawson will undergo further assessments this week, and be given lunches of sandwiches or pasta salads with fruit, to be eaten in his cell.

For dinner, he will be given a ‘cook chill’ meal in a foil tray of – meat and vegetables, or vegetarian – to take into his cell when he is locked up for the night around 3.30pm each afternoon.

He will be allowed visitors, and can speak on the phone with up to six people on a public style telephone used by all inmates.

Each call must be a maximum of six minutes.

Dawson will be allowed to spend around $60 a week on ‘buy-ups’ – items like toiletries, biscuits and packaged food – if the money is placed in his prison bank account.

He will also attend meetings with a classification committee to assess which correctional facility will be most suitable as his ‘jail of sentence’ for his incarceration once Justice Harrison decides on how long Dawson must spend behind bars.

Sydney public transport chaos: Sydneysiders are being urged to work from home as train and bus drivers go on strike