Alec Baldwin is “devastated” that he will be charged with involuntary manslaughter, a source revealed, and the actor and his wife Hilaria are “leaning on each other”.

“You were prepared for all outcomes, but nothing can really prepare you,” the source told People. “They really lean on each other and try to focus on the kids.”

“Hilaria has been Alec’s rock the whole time and to see him so distressed is heartbreaking for her,” the source said, adding that Hilaria is “doing everything she can to support him and they are doing their best.” ‘to stay strong for the children.’

Baldwin, 64, was seen Friday for the first time since vowing to fight charges over the death of 42-year-old cinematographer Halina Hutchins on the set of Rust in New Mexico in October 2021. 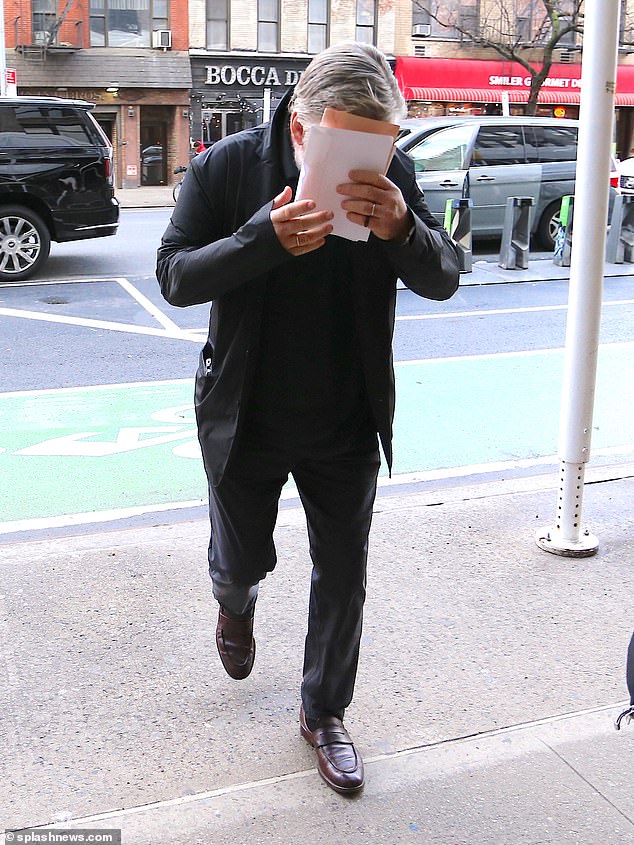 He ran in a panic from his Manhattan apartment into a car and was later seen walking into an office building in the city, where he attempted to cover his face with letters after emerging from the vehicle.

Baldwin has not commented on the charges, but last night he liked an Instagram post from fellow actor Mickey Rourke, who wrote that there was no way he should be charged.

Hilaria, 39, left her luxury Manhattan home this morning separately with several of her children – two coffees in hand.

She was wearing a green Mayfair Group sweatshirt with “EMPATHY” written – valued at $108 – across the front as she looked pale and donned large dark glasses to cover her face.

Just yesterday, she was spotted wearing a beige hoodie with “HUMAN” written on the front, picking up her children from their driver on Thursday.

Before the announcement, she was all smiles, dripping in diamonds as she left Thursday morning, cell phone in one hand with a coffee mug.

Wearing a faux fur bomber jacket, her signature leather-look track leggings and oversized sunglasses, the mother-of-seven rounded off her look with a pair of $300 beaded and rhinestone-encrusted slippers from Spanish brand Alameda Turquesa.

Hilaria, who married the Oscar-nominated actor in 2012, was spotted taking her children to school on Thursday – before the charges were announced.

When she went to pick them up later that afternoon, her facial expression had changed noticeably.

It comes as sources say production of Rust will continue despite the indictment, starring Baldwin.

Joel Souza will return to his role as director, with on-set security officers and union members.

Baldwin’s lawyers say he will contest the charges and insist he cannot be held responsible for the on-set prop guns, which were the responsibility of gunsmith Hannah Gutierrez-Reed – who is also to be charged with involuntary manslaughter.

Halyna Hutchins was shot dead by actor Alec Baldwin on the set of Rust on October 21, 2021

Alec Baldwin is seen October 21, 2021 after speaking to investigators about the fatal shooting of Halyna Hutchins. Baldwin’s phone is now being sought by the team investigating Hutchin’s death

Santa Fe prosecutor Mary Carmack-Altwies snarled at Baldwin as she announced the charges, saying, “An actor doesn’t get a free pass,” as she insisted he pulled the trigger on the gun that killed Hutchins.

Prosecutors say they are “confident” they will get convictions, and special counsel Andrea Reeb adds: “We were very confident that it was going to be a criminal case pretty early on when we started looking at it.”

“I’m sure he was confident he wouldn’t be charged. But he’s not above the law and he’s someone who has committed a crime and we’re going to put him under the law, hold him accountable.’

He and Gutierrez-Reed face up to 18 months in prison if convicted of involuntary manslaughter.

If they are also convicted of weapon enhancement on this charge, they face a mandatory five-year prison sentence.

In a statement, Baldwin’s attorney said: “This decision distorts the tragic death of Halyna Hutchins and constitutes a horrific miscarriage of justice. Mr. Baldwin had no reason to believe there was a live bullet in the gun – or anywhere on the film set.

In a statement, Baldwin’s attorney said: “This decision distorts the tragic death of Halyna Hutchins and constitutes a horrific miscarriage of justice.

‘Mr. Baldwin had no reason to believe there was a live bullet in the gun — or anywhere on the film set.

“He relied on the professionals he worked with to reassure him that the gun had no live cartridges. We will fight these allegations and we will win.”

Carmack-Altwies told CNN they concluded that Baldwin pulled the trigger — and that he ran a “fast and loose set” that was plagued by safety issues.

“There was such a lack of security and safety standards on this set. There were live rounds on set, they were mixed in with dummy rounds.

Her appearance comes after Mickey Rourke jumped to Alec’s defense and insisted that he “no way” should be charged for shooting Rust’s camerawoman on set.

Rourke, 70, who appeared on Baldwin’s podcast in 2016, said it was wrong to prosecute the Oscar-nominated actor.

Posting on Instagram, he said, “I never normally spend my 2 cents on what happens on someone’s movie set.”

“It is a terrible tragedy what happened to cinematographer Halyna Hutchins.

“But by no means should actor Alec Baldwin be charged with any negligence.”

Baldwin, who has since liked Rourke’s post, insists he is not responsible for the shooting and points out that he trusted the firearms professionals employed on set. His attorney said he expected his release.

Rourke claimed it was wrong to expect Baldwin to manage the gun safety aspects of the set.

“Most actors don’t know anything about guns, especially if they didn’t grow up with them,” he continued.

‘Alec did not bring the gun to the set from his house or his car, if guns are involved on a film set the guns should only be handled by the ‘gun armour’.

“In some cases the 1st AD hands a weapon to an actor, but more often than not the weapon is given to the actor directly from the ‘armour of arms’.

“That’s Armor’s job on set. To have an expert on every kind of dangerous weapon.’

Rourke said the actors could then either “dry fire the gun” or check the barrel themselves.

He said the decision to charge Baldwin was “terribly wrong,” adding, “I’m sure Alec is already suffering enough from what happened. But blaming him is terribly wrong.”

https://www.dailymail.co.uk/news/article-11659697/Baldwin-devastated-faces-charges-wife-Hilaria-leaning-other.html?ns_mchannel=rss&ns_campaign=1490&ito=1490 Baldwin ‘devastated’ to be charged – and he and his wife Hilaria ‘lean on each other’