Outrageous moment Bali bomber, who built the explosives that killed 202 people, laughs and jokes with his wife about returning to the party island for a romantic holiday – as he faces an early release from prison

The ruthless terrorist who built the explosives that killed more than 200 people in the Bali bombings says he is planning a romantic vacation to the party island if he is released from prison within days.

Umar Patek was sentenced to more than 20 years in prison in 2012 for his role in the 2002 Paddy’s Bar and Sari Club atrocity that killed 202 innocent people, including 88 Australians.

But the extremist, who now says he has changed, was recently granted a further five-month sentence reduction for good behavior after half his sentence was staved off.

In a newly released video, Patek and his wife flirt and laugh at the jail compound in Java, Indonesia, and talk about kids and an upcoming getaway. 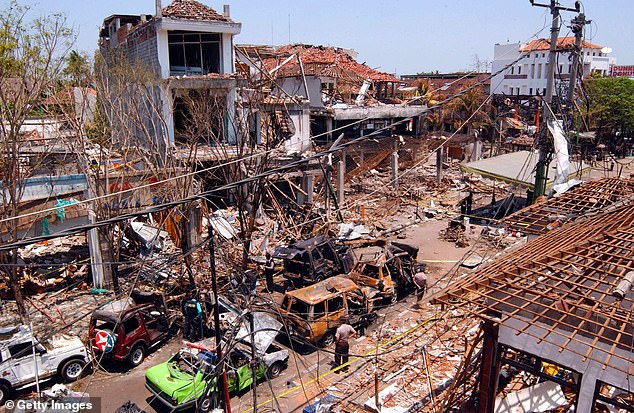 The 2002 bombings killed more than 200 people, including 88 Australians

The horror of the Bali bombing

At around 11:00 pm on October 12, 2002, three bombs were detonated in Bali, two in busy nightclubs – the Sari Club and Paddy’s Bar – and one in front of the American Consulate.

The blasts killed 202 people, including 88 Australians, and injured hundreds more.

The attacks, carried out by the terrorist organization Jemaah Islamiyah, represent Australia’s largest loss of life from any act of terrorism.

More than 30 people were eventually arrested for their involvement in the attacks.

After the attacks, the Australian Defense Force mobilized immediately and just 17 hours after the blast, the first RAAF aircraft arrived to evacuate injured Australians. At least 66 seriously injured were flown to Darwin for treatment in the largest medical evacuation since the Vietnam War.

The military then assisted in secondary transfers of people from Darwin to medical centers across the country.

His veiled wife described him as “patient and loving” and spoke of plans to start a family once he regains his freedom.

Indonesian authorities say the former Member of the radical Islamic terrorist group Jemaah Islamiah was “de-radicalized” but Anthony Albanese described him as “disgusting”.

“His actions were the actions of a terrorist,” Australia’s Prime Minister told the Today Show.

“They have had such terrible consequences for Australian families that are still ongoing, the trauma that is there.”

In a newly released video, Umar Patek and his wife (pictured) can be seen flirting and laughing together at the prison compound in Java, Indonesia, as they discussed a possible holiday in Bali

Indonesian authorities say the former member of the radical Islamic terror group Jemaah Islamiah has been “de-radicalised” but Anthony Albanese described him as “despicable”.

Mr Albanese said his diplomats were lobbying the Indonesian government for the reduction.

Patek’s sentence had already been reduced by 18 months on a previous occasion, bringing his total reduction to one year and 11 months.

He would have been eligible for parole in January after serving two-thirds of his sentence.

News of Patek’s possible release comes less than two months before the 20th anniversary of the October bombings, which sparked outrage among victims of the horrifying blast.

“This will add to the distress and trauma felt by the families of the 88 Australians who lost their lives in this terrorist attack, particularly on memorial days and the 20th anniversary is fast approaching,” Mr Albanese told Seven’s Sunrise.

“It’s not just about the 88 people, we’re talking about thousands of people who have been affected by trauma and who have lost loved ones.

“They lost mothers and fathers and sons and daughters and brothers and sisters in this terrorist attack.”

The Prime Minister added there was little he could do to change the decision.

https://www.dailymail.co.uk/news/article-11160267/Bali-bomber-Umar-Patek-planning-romantic-holiday-island-wife-prepares-released.html?ns_mchannel=rss&ns_campaign=1490&ito=1490 Bali bomber Umar Patek plans a romantic getaway to the island with his wife as he prepares for his release

150 people were injured in a train accident in Spain today