‘Belly where are you?’: Oleksandr Usyk continues his mind games with Tyson Fury in a video message to the Gypsy King… after Frank Warren revealed the Ukrainian has been given a contract for the undisputed duel

The Ukrainian, who holds three of the division’s four recognized titles, is getting closer to a clash with WBC champion Fury that would crown the first undisputed heavyweight king in more than two decades.

Fury’s promoter Frank Warren announced this week that a draft contract has been sent to the Ukraine team, with early March being targeted as a possible date and with Saudi Arabia reportedly leading the race to see it happen. 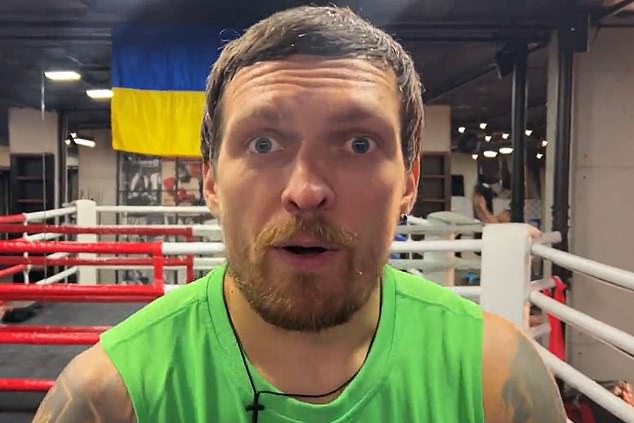 Oleksandr Usyk has continued the mind games with Tyson Fury by again branding him a ‘belly’.

Usyk took to Twitter where he delivered a video message to the Gypsy King.

Usyk was spotted in a boxing ring at the gym saying, “Belly, where are you?”

It’s not the first time Usyk has mocked Fury’s physique following another message earlier this week on social media.

Oleksandr Usyk has stepped up the mind games with Tyson Fury by branding his rival ‘Belly’.

Along with a photo of himself looking slim in his swimwear, Usyk wrote on Tuesday: “Middleweight is here! where is your belly @Tyson_Fury’.

Usyk sarcastically referenced Fury’s shared jibe that he was a “pumped middleweight” despite winning a heavyweight gold medal at the London 2012 Olympics and starting his pro career as a cruiserweight.

Fury said when calling out the 35-year-old in September: “I’m a seven foot, 20 stone giant and I’m going to destroy you, middleweight. Find your balls and come to me, b***h.’

The two heavyweight champions famously faced each other after Fury’s win over Dereck Chisora ​​at Wembley last month as he successfully defended his WBC title with a 10th-round stoppage against his old foe.

After the fight, Usyk approached the ring to confront Fury, who yelled at his future opponent: “You ugly little man. Let’s get it on b****. You can laugh now, but I’ll end this little sucker. I’ll wreck you. You little prat. What will you do? You’re going to screw everything up, you little sausage.’

Fury and Usyk are now close to sealing their undisputed battle after the former’s team sent a draft contract, although Warren insists it needs to be signed “very, very quickly”.

“We sent them a draft contract, here we are,” the Queensberry boss said on talkSPORT.

“Listen, this needs to be sorted out very, very quickly now because time is against us.”

While a venue has yet to be decided, Warren went on to announce that the most lucrative option would be pursued, with Saudi Arabia seen as the front-runner.

When asked where the fight could take place, the Queensberry boss continued: “Where most of the money comes from. Nothing is available from anywhere outside the UK.

“We know what it can generate in the UK but if it goes elsewhere it depends on the numbers.

“I know a lot of people are complaining about it and I agree it should be at Wembley, I’d love to see it there.

“But Muhammad Ali and George Foreman went and fought in Zaire, then you had the thrilla in Manila, you had the big fights in Jamaica.

“They went where the money was and these guys will do the same.”

https://www.dailymail.co.uk/sport/boxing/article-11634685/Belly-Oleksandr-Usyk-continues-mind-games-Tyson-Fury.html?ns_mchannel=rss&ns_campaign=1490&ito=1490 “Belly, where are you?”: Oleksandr Usyk continues the mind games with Tyson Fury

'I FUCKINGLY HATED THIS YEAR': Lisa Rinna gives candid interview about her shocking exit from RHOBH