Jason Priestley, 53, cut a stylish figure at the screening of his new film Offside: The Harold Ballard Story on Wednesday in Toronto.

The Beverly Hills, 90210 star looked stunning in a light blue button down shirt beneath a fitted navy suit.

The Vancouver native styled his hair short and sported a trimmed beard as he took the stage to talk about his latest project, a documentary that will tell the controversial story of Toronto Maple Leafs owner Harold Ballard. 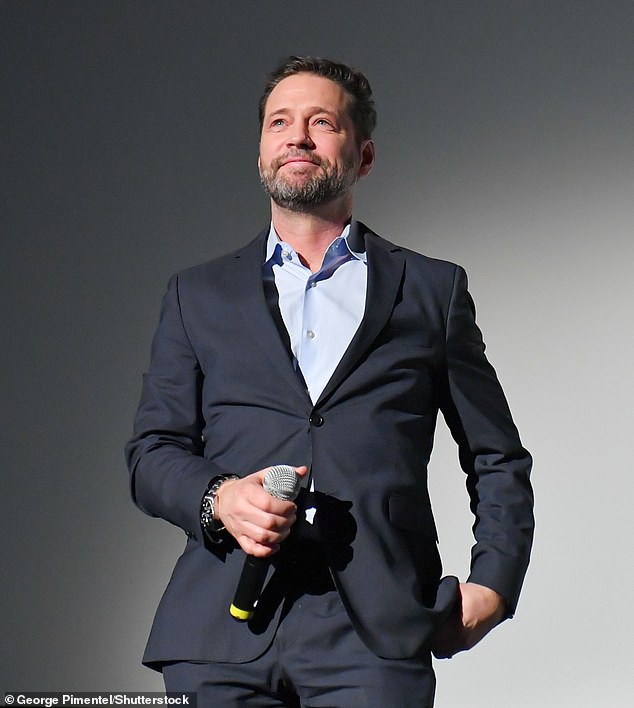 A sports story: Jason Priestley, 53, looked handsome while attending the screening of his new film Offside: The Harold Ballard Story in Toronto on Wednesday

Ballard’s offensive behavior ranges from underhanded contract deals and sexist rants to a year in prison for theft and fraud.

Earlier Wednesday, Jason appeared on CTV’s Your Morning Show alongside executive producer Michael Geddes, where they discussed the inspiration for the film and why it’s relevant now.

Jason explained that they went through a lengthy process of interviewing former professional hockey players and employees who have personally worked with Ballard.

“We wanted to document the experience as closely as possible, firsthand,” Priestly said.

Looking good: The 53-year-old father of two looked fit in a light blue button down shirt under a navy suit

The Whole Group: For nine years, Priestley starred in Beverly Hills, 90210 as Brandon Walsh, a loveable character who has navigated friendships, dating, school and issues with racism, drug use and more

Untold story: Priestley explained that they went through a lengthy process of interviewing former professional hockey players and employees who worked closely with Ballard. “We wanted to document the experience as closely as possible”

Unique: Describing Ballard, Priestley said, “He was an incredibly controversial, interesting guy who was a lot of things to a lot of people.”

Jason added, “Making this documentary was a great education for me. I had to learn a lot about him. And that’s how I really learned everything about him. He was an incredibly controversial, interesting guy who meant a lot of things to a lot of people.

Jason explained that the goal of this film was “to lay out all the information that we were given, the good, the bad, the ugly, and let the audience decide how they feel about it at the end”.

After speaking at the event, Priestley posed for a few photos with other notable attendees from the sports world, including former Maple Leafs hockey player Rick Vaive and Canadian TV personality Christine Simpson.

Simpson looked fashionably chic in a blue and white checked leather-trimmed jacket as she posed with the proud director at the event.

Former NHL legend Rick Vaive also posed for a photo with Jason after his speech at the screening. Vaive is the first 50-goal scorer in Toronto Maple Leafs franchise history.

Priestley is best known as the virtuous Brandon Walsh on the television series Beverly Hills, 90210, in which he played a 1990s heartthrob on the hit show TV’s hottest zip code.

Priestly also starred as Richard “Fitz” Fitzpatrick on the series Call Me Fitz and played the role of Matt Shade on the Canadian series Private Eyes.