President Joe Biden declared Donald Trump is a ‘threat to the country’ in a speech that contained his harshest rhetoric to date about his predecessor in the Oval Office and the MAGA movement.

‘Equality and democracy are under assault. We do ourselves no favor to pretend otherwise,’ Biden declared at the top of his remarks before Philadelphia’s Independence Hall.

He called out Trump by name, slamming the former president for his false claim the 2020 election was stolen and berating those who support Trump.

‘Donald Trump and the MAGA Republicans represented extremism that threatens the very foundations of our republic,’ Biden said to great applause from his supporters.

He made it clear he doesn’t think every Republican is ‘extreme’ or a threat but said ‘there’s no question that the Republican party today is dominated, driven and intimidated by Donald Trump and the MAGA Republicans.’

‘And that is a threat to this country,’ he said.

He berated them for refusing to accept his presidency.

‘MAGA Republicans do not respect the Constitution. They did not believe in the rule of law. They did not recognize the will of the people,’ he said. ‘They refused to accept the results of a free election.’

‘You can’t love your country only when you win,’ Biden said.

The president was hounded by protesters who, outside the national park, chanted: ‘Let’s go, Brandon’ and ‘F*** Joe Biden.’

During his remarks, viewers could hear siren noises, shouts and someone yelling on a bullhorn in the background.

The president even addressed the hecklers: ‘Notwithstanding the folks you hear on the other side – They’re entitled to be outrageous. This is a democracy.’

‘Good manners is nothing they’ve ever suffered from,’ he added. 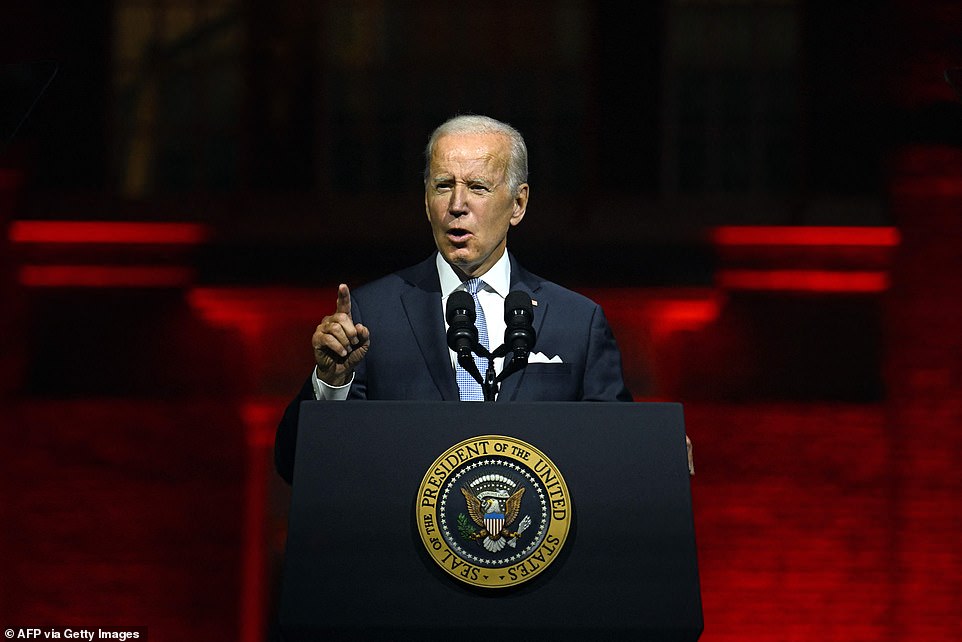 ‘Donald Trump and the MAGA Republicans represented extremism that threatens the very foundations of our republic,’ President Joe Biden said during his speech

Jill Biden joined President Biden on stage after his remarks

Naomi Biden and her fiance Peter Neal, who are getting married in the White House in November, flew with the president and first lady to Philadelphia for President Biden’s speech

The president painted a picture of a dystopian society of Republicans win the 2022 and 2024 elections.

‘They promote authoritarian leaders and they fanned the flames of political violence that are a threat to our personal rights, to the pursuit of justice to the rule of law, to the very soul of this country.’

And, Biden charged, Republicans will try to steal elections again.

‘They see their MAGA failure to stop a peaceful transfer of power after the 2020 election as preparation for the 2022 and 2024 elections. They’re tried everything last time to notify the votes of 81 million people,’ he said.

‘This time they’re determined to succeed at thwarting the will of the people.’

Ahead his remarks, the White House said Biden wasn’t giving a political speech. But he took direct aim at Trump, who is mulling a 2024 challenge to Biden, and at Republicans, who are attempting to win control of Congress in the midterm election.

‘We need everyone to do their part. So speak up, speak out, get engaged, vote, vote, vote,’ the president said during his speech.

And Biden vowed to stand up for the republic, setting himself up as the defender of democracy.

‘As your president I will defend our democracy with every fiber of my being and I’m asking every American to join me.’

Since Biden took office, Trump allies have been able to install people who deny the election results in state capitols in several states, and scores of GOP officials still won’t say Biden’s election was legitimate.

‘They embrace anger. They thrive on chaos. They live not in the light of truth but in the shadow of lies,’ Biden said in another one of his MAGA attacks.

He specifically called them out for denying his election win.

‘This is a nation that respects free and fair elections. We honor the will of the people – we do not deny it,’ the president said.

Then he rolled out a line that seemed aimed straight at Trump.

He said he wouldn’t allow the will of the American people to be ‘overturned by wild conspiracy theories and baseless evidence-free claims of fraud. I will not stand by and watch elections in this country stolen by people who simply refuse to accept that they lost.’

Biden brought the trappings of the presidency with him: two Marines came out ahead of him to stand at attention during his entrance. ‘Hail to the Chief’ played him on stage. Jill Biden accompanied him on the trip.

The president also used a historic backdrop to make his point: he spoke outside of Philadelphia’s Independence Hall, the site where the Declaration of Independence and the U.S. Constitution were debated and adopted by America’s founding fathers.

Marines salute as the president and first lady walk on stage

Trump, meanwhile, remains a force to be reckoned with in the Republican Party, pushing his influence in primaries across the country, where his MAGA supporters can make or break a candidate.

Trump’s record in those races is mixed – he took down his top target, Wyoming Republican Rep. Liz Cheney in her August primary, but other Republicans who voted for his impeachment have gone on to primary victories.

And now there are rumblings of worry from some in GOP leadership, who fear the federal investigation into whether Trump took classified documents from the White House will affect them at the ballot box in November.

But Trump still has his defenders. The former president will be in Pennsylvania on Saturday, when he holds a campaign rally for the state’s Senate and gubernatorial candidates in Wilkes-Barre.

House Republican Leader Kevin McCarthy issued a stark warning to voters ahead of Biden’s remarks, issuing his words of warning from Biden’s hometown of Scranton.

‘Families are barely able to make ends meet,’ he said. ‘Electricity and energy costs – they are consuming household budgets. Citizens are forced to make agonizing choices every single day just to pay the bills.’

‘You know more than 20 million American households – that’s about one in every six families – have fallen behind on the utility bills,’ McCarthy added.

Voters have listed the high price of food and gas as one of their top concerns. Inflation, which hit record highs earlier this year, has started to drop off. Gas prices also have declined in recent weeks – fueling Democratic hopes that voters won’t take out their anger and frustration on them at the ballot box.

Democratic hopes for the midterms are rising. A new Wall Street Journal poll on Thursday showed the party has made gains among independent voters and Americans have an improved view of President Biden, who has seen his approval rating notch upwards in the last few weeks.

Biden has been targeting Trump supporters as he campaigns for Democrats.

The president, in August, accused Trump and ‘extreme’ Republicans of ‘semi-fascism’ at a fundraiser for Democrats.

‘What we’re seeing now, is either the beginning or the death knell of an extreme MAGA philosophy,’ Biden told about 100 wealthy donors. ‘It’s not just Trump, it’s the entire philosophy that underpins the – I’m going to say something – it’s like semi-fascism.’

Biden has said he was compelled to run for president after the Unite the Right rally at Emancipation Park in Charlottesville, Virginia, in August 2017 that led to a clash between far-right marchers and counter-protesters

President Joe Biden has decried the January 6th insurrection on the Capitol, where Trump supporters tried to stop the certification of the 2020 election; on the first anniversary of the riot, Biden said the country is in a battle for its soul

Biden began his 2020 presidential campaign in Philadelphia in a May 2019 speech.

And he has said he was compelled to run for president after the 2017 Unite the Right rally in Charlottesville, Va., where a clash between white supremacists and counter-protesters left three dead and dozens injured.

He’s kept up his ‘soul of democracy’ argument throughout the last campaign and into his first years in the presidency.

On the first anniversary of the January 6th insurrection on the Capitol, Biden said the country is in a battle for its soul.

‘I said it many times and it’s no more true or real than when we think about the events of January 6th: We are in a battle for the soul of America. A battle that, by the grace of God and the goodness and gracious — and greatness of this nation, we will win,’ Biden said in remarks in the Capitol building.

President Biden spoke outside of Philadelphia’s Independence Hall, the site where the Declaration of Independence and the U.S. Constitution were debated and adopted by America’s founding fathers

Joe Biden, with Jill Biden, kicked off his 2020 presidential campaign at a May 2019 rally in Philadelphia

Thursday night’s speech in Philadelphia marked Biden’s third stop in the battleground state of Pennsylvania in the span of one week.

Biden was in Wilkes-Barre, Penn., on Tuesday to talk about supporting law enforcement.

And, on Monday, the president will campaign with Democratic Senate candidate John Fetterman at the Pittsburgh Labor Day parade.

NICKMERCS reveals how to "Break" the Prowler in Apex Legends