Speaking at the US conference of mayors on Friday, Biden chided the GOP for not passing his immigration reform proposals, saying, “They felt it was a better issue for a campaign than a problem for a solution.”

The president added: “So we have a choice: you can keep using immigration to try and gain political points, or we can help solve the problem.”

However, Republicans have blamed Biden for scrapping Trump-era border policies, given illegal immigration is rampant at the US-Mexico border.

And hours after Biden’s speech, Customs and Border Protection announced there were 251,487 encounters with migrants at the border in December, bringing the last three-month figure to 717,600. 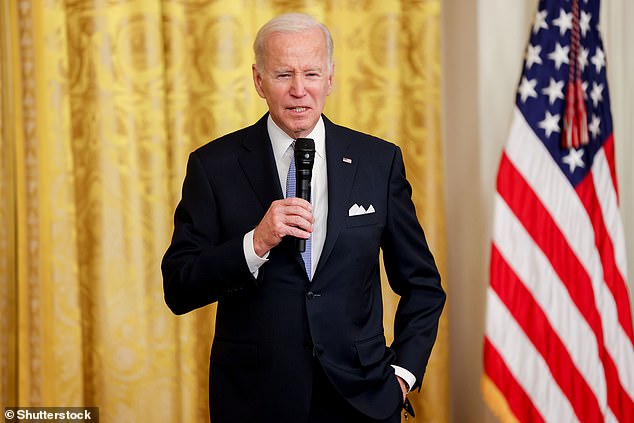 The latest figures showed that there were 251,487 encounters with migrants at the border last month

The December figure was up more than 7 percent from November and nearly 29 percent year-on-year.

Last month, uncertainty over Title 42, a Trump-era policy that has expelled migrants at the border since the pandemic began, has fueled a surge in illegal immigration.

Migrants’ rush to cross the Title 42 border may seem contradictory given the policy’s making it easier for the US to deport undocumented migrants.

However, many expected that lifting the ban would make crossing more difficult, at least temporarily, due to increased migrant numbers and the military presence at the border.

A Biden administration official told Fox News that the spike was allegedly caused by GOP officials’ criticism of the president and warnings that a failed policy effectively left the border open to exploits.

“Of course, the numbers will be higher if Republican-elected officials like Smugglers falsely announce that the border is open because of a court order repealing Title 42,” the officials said.

“Despite their misinformation, our border security measures remain strong,” the official added, saying rules introduced in October had already held back a flood of migrants from Venezuela.

As Democrats and Republicans play the blame game, a GOP-led panel of House Oversight will hold its first hearing investigating the Biden administration’s alleged abuse of the southern border.

The probe has asked Homeland Security Secretary Alejandro Mayorkas, who is facing possible impeachment, to hand over everything related to the migrant crisis.

Migrants continue to travel from Mexico to the US to seek asylum. Pictured: A group of migrants moving through the CBP checkpoint in Juarez on Wednesday

Border crossings have increased by 7 percent since November and by almost 29 percent since last December. Pictured: migrants at immigration appointments near the border

Pictured: Asylum seekers walk past a barbed wire fence along the Rio Bravo Tuesday while members of the Texas National Guard stand by

James Comer, the new chairman of the House Oversight and Accountability Committee, vowed to hold Biden and Mayorkas “accountable” and invited four border patrol officers to attend one of the first hearings of the 118th Congress the week of February 6.

In a letter to Mayorkas demanding materials and documents, Comer accused President Joe Biden and his DHS secretary of “willful acts” that contributed to a surge in drug cartel operations, people smuggling and illegal immigration.

“The American people deserve answers about the role of the Department of Homeland Security (DHS) in undermining the efforts of Customs and Border Protection officials to secure the southern border,” Comer wrote in his Thursday letter to Mayorkas.

Several border communities have been thrown into chaos in recent years, with some towns overrun by migrants seeking asylum.

Cities like El Paso have seen resources for the migrants, like shelter and pantries, dwindle in the face of the massive numbers.

“The United States immigration system should be ‘safe, orderly and humane.'” It is not,” Comer wrote to Mayorkas.

“The committee is requesting documents and information to understand the policies of DHS, the cost of the emergency response needed to respond to the deepening crisis, and the national security risks posed by those policies,” he added.

“The American people and their elected officials need to understand DHS’s role in the humanitarian and national security crisis along the US southern border.”

https://www.dailymail.co.uk/news/article-11661655/Biden-slammed-accusing-GOP-point-scoring-immigration-illegal-border-crossings-ramps-up.html?ns_mchannel=rss&ns_campaign=1490&ito=1490 Biden lashed out for accusing the GOP of scoring points on immigration as illegal border crossings increase