Biden is the first sitting commander in chief to deliver a Sunday sermon at the Ebenezer Baptist Church in Atlanta, the congregation that Dr. Martin Luther King Jr. once co-led.

He delivered a politically charged address in which he commented on King’s legacy and referenced Bible stories and verses – while repeating his often-heard declaration that Americans are “in a battle for the soul of our nation.”

The President also repeatedly stressed the importance of democracy and lamented the “collapse” of the “institutional structures” in the US – and referred to the recent unrest in Brasilia.

Biden’s appearance before a friendly Georgia audience comes amid mounting scrutiny from both sides of the aisle in Washington, DC over his handling of classified files. 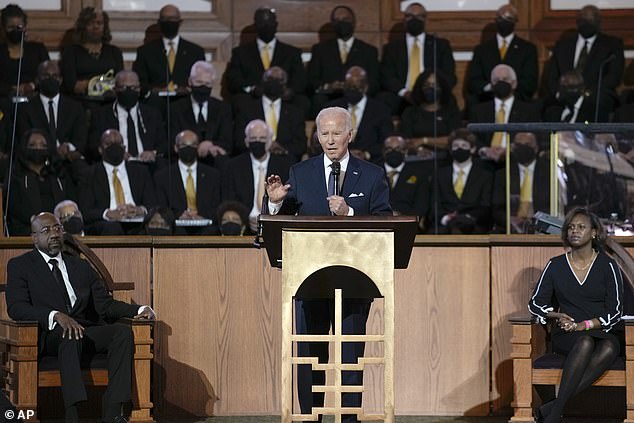 President Joe Biden was the first sitting commander in chief to deliver a Sunday sermon at the Ebenezer Baptist Church – once hosted by Dr. Martin Luther King Jr.

Biden’s speech came amid a rapidly escalating scrutiny of his handling of classified documents found at his home in Wilmington, Delaware, and at a DC think tank where he formerly had a private office

“This is a time of choice — we have direct choices,” Biden said from the pulpit. ‘Are we have people who prefer democracy to autocracy?’

King’s mission, Biden said, is to “redeem the soul of America.”

Referring to the Bible, he urged Americans to be “doers of the word.”

“The struggle for the soul of this nation is an eternal struggle,” he said. “It’s a constant struggle.”

“It’s a constant struggle between hope and fear, kindness and cruelty, justice and injustice – against those who act with racism, extremism and insurgency.”

At another point, Biden again contrasted what people believed to be fixed views about government structures during King’s time with today’s uncertainty amid authoritarianism’s slow creeping around the world.

Democratic Senator Raphael Warnock, who has been the senior pastor at Ebenezer for 17 years, introduced Biden to the pulpit on Sunday

The President folded arms with several people, including Warnock and White House Counsel Keisha Lance Bottoms, while singing “We Shall Overcome” to end the service

“I doubt any of us would go to Dr. King’s day that this country’s institutional structures – literally – might collapse,” the President said grimly. “As we are seen in Brazil, as we see it in other parts of the world.”

He reiterated that the country was at a “tipping point,” adding, “We know there is still much work to be done in the areas of economic justice, civil rights, voting rights and protecting our democracy.”

Biden was introduced by Democratic Senator Raphael Warnock, who has been the church’s senior pastor since 2005.

The service ended with Biden and Warnock, linked arm in arm with several other people, singing “We Shall Overcome.”

King was co-pastor of the Ebenezer Baptist Church from 1960 to 1968 when he was murdered by fugitive James Earl Ray.

Senior White House Advisor Keisha Lance Bottoms – the former mayor of Atlanta – said ahead of his trip: “The President will be speaking on a range of issues in the Church, including the importance of our access to our democracy to have.”

Martin Luther King Jr. served as co-pastor of the church from 1960 until his assassination in 1968

On his 93rd birthday, the President is reflecting on the legacy of the murdered civil rights icon

It comes amid a growing crisis for his presidency over multiple disclosures of classified documents found at his home in Delaware and at an old office of his in Washington, DC.

The White House on Saturday admitted five classified pages were found in Biden’s home in Wilmington, Delaware, after announcing the existence of a page earlier this week.

Ten were found at the Penn Biden Center for Diplomacy and Global Engagement, a think tank where Biden used a private office from 2017 until his presidential bid in 2020.

Biden has not been to Georgia since January of last year after avoiding the peach state during its tense midterm election.

A little over a month ago, Warnock secured his first full term in the US Senate, narrowly beating Donald Trump-backed Republican soccer star Herschel Walker in a runoff earlier in December.

The president, whose job-approval rating hovers in the low 40s and at times even dips into the high 30s, gave the Peach State a wide berth while appearing on battlefields like Wisconsin and Colorado.

The President had delivered a fiery speech about the need to pass a voting rights bill in Congress.

He attacked Senate Republicans, urging the chamber to abolish the filibuster that would have allowed Democrats to pass legislation with just their simple majority.

But the push to end the filibuster ultimately foundered on opposition from conservative Democratic Senators Joe Manchin and Kyrsten Sinema.

Consequently, the Freedom to Vote Act and the John Lewis Voting Rights Advancement Act never made it onto Biden’s desk.

His speech at the time sparked outrage from Republican opponents of the Voting Rights Act after the President compared those critics to notorious racists George Wallace and Jefferson Davis.

https://www.dailymail.co.uk/news/article-11637647/Biden-rips-racism-extremism-insurrection-politically-charged-speech-church-MLK-led.html?ns_mchannel=rss&ns_campaign=1490&ito=1490 Biden tears up “racism, extremism, insurgency” in a politically charged speech at the church once led by MLK