President Joe Biden will deliver a prime-time speech Thursday night on the “continued battle for the soul of the nation,” the White House announced.

He will make his remarks outside of Philadelphia’s Independence Hall, the site where the Declaration of Independence and the US Constitution were debated and adopted by America’s Founding Fathers.

The speech comes as Americans prepare to head to the midterm elections in November.

The President will discuss how the nation’s standing in the world and its democracy are at stake.

“He will speak about the strides we have made as a nation in protecting our democracy, but how our rights and freedoms continue to be under attack,” the White House said. “And he will make it clear who is fighting for these rights, for these freedoms and for our democracy.”

It is unclear whether he will mention his predecessor in the Oval Office: ex-President Donald Trump.

Biden had made Trump’s supporters and his brand of conservatism a punching bag for Democrats, accusing “extreme MAGA Republicans” of wanting to take away people’s rights.

He is trying to portray November’s contest – which will decide control of the House and Senate – as one between supporting democracy or GOP extremism. 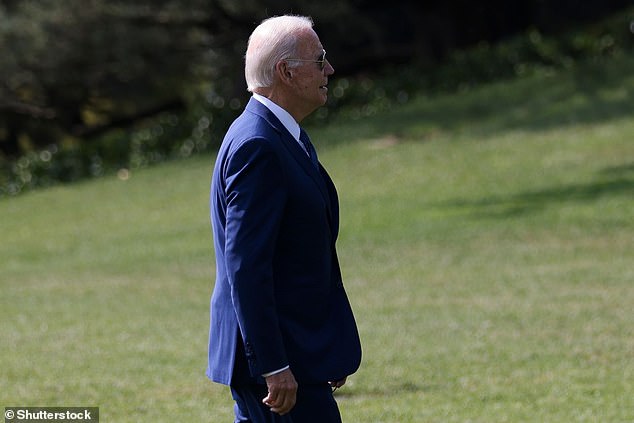 President Joe Biden will deliver a prime-time speech Thursday night on the “continued battle for the soul of the nation,” the White House announced

Biden’s speech also comes as Trump continues to push his false claim that he won the 2020 presidential election.

Trump directly demanded on Monday that he be declared the winner of the last presidential election – and demanded that another be held today.

The former president repeated his lie that the election was rigged.

“This is MASSIVE FRAUD AND ELECTION INTERFERENCE at a level never before seen in our country.

“REMEDY: Declare the rightful winner or, and this would be the minimal solution, declare the 2020 election irreparably compromised and hold a new election immediately!” Trump wrote on his social media account Truth.

Biden has targeted Trump supporters while campaigning for Democrats. Last week, the President accused Trump and “extreme” Republicans of “semi-fascism” at a fundraiser for Democrats at a posh private home in the Maryland suburbs outside of Washington DC

Biden began his 2020 presidential campaign in Philadelphia with a speech in May 2019. Biden said he was inspired to run for president after the 2017 Unite the Right rally in Charlottesville, Virginia, where a clash between white supremacists and counter-protesters three Killed and dozens injured.

He has also denounced the Jan. 6 riot on the Capitol that saw Trump supporters attempt to stop certification of the 2020 election.

On the first anniversary of the riots, Biden said the country was in a battle for its soul.

Biden is increasing his own travel schedule to help Democrats retain control of Congress.

The Philadelphia event will be his third in the battleground state of Pennsylvania in a week.

Biden will be in Wilkes-Barre, Pennsylvania on Tuesday to deliver a law enforcement support speech he was originally scheduled to deliver in mid-July before he tested positive for Covid.

And on Labor Day, the President will face Democratic nominee John Fetterman on Labor Day amid his Senate battle with Dr. Mehmet Oz to run for office.

The campaign freeze is one of two Biden will have on Labor Day if he travels in two Midwestern states with key midterm election contests to rally one of the most loyal Democratic constituencies.

The president will be in Milwaukee, Wisconsin and Pittsburgh, Pennsylvania to “celebrate Labor Day and the dignity of American workers,” the White House said in a statement Monday.

Biden will participate in each city’s famous Labor Day parade. Unions are a key Democratic constituency, and Biden has long been a part of many blue-collar unions.

The president refines his lines of attack on Trump supporters ahead of November’s contest, calling them “extreme MAGA Republicans.”

At a political rally in Rockville last week, Biden said Trump and the MAGA Republicans were “destroying America.”

Biden warned that “MAGA Republicans not only threaten our personal rights and economic security, they are a threat to our democracy itself.”

“They refuse to accept the will of the people, they welcome political violence, they don’t believe in democracy,” he continued. “So right now, those of you who love this country, we must be stronger, more determined and more committed to saving America than MAGA Republicans are destroying America.”

Biden has outed congressional Republicans, who he said felt they should have voted for the Anti-Inflation Act – his latest legislative achievement, which includes health care, prescription drug and climate initiatives – but did so for fear of political repercussions have not done.

“You’d think if Republicans really cared about bringing inflation down, they would have voted the Inflation Control Act,” Biden said. “But every single Republican voted against — even I know at least a dozen of them who thought they should vote for it, but they would vote for it.”

No Republican voted in favor of the law in either the House or Senate.

“Every single American needs to take revenge on the vote,” Biden said.

In his speech, Biden cracked down on the so-called “MAGA Republicans” and the former president.

“In 2020, you and 81 million Americans voted to save our democracy, that’s why Donald Trump is not just a past president, he’s a defeated former president,” Biden said.

“Will we be a country moving forward or backward? Will we build a future or be obsessed with the past? Will we be a nation of unity, hope, optimism, not a nation of anger, violence, hatred and division?’ he asked the crowd.

“Trump and the extreme MAGA Republicans have made their choice. To go backwards, full of anger, violence, hatred and division, but we chose a different path,” the President said.

The President will travel to a third Midwestern state — Ohio — next Thursday with a competitive gubernatorial and Senate contest.

Biden is also ramping up after his poll numbers jumped to his highest mark of the year — 44 percent — according to a Gallup poll released Thursday.

Pollsters surveyed US adults from Aug. 1-23, a period during which Biden recovered from COVID-19 and reinfection, took out al-Qaeda leader Ayman al-Zawari, and inked his name on the Inflation Reduction Act .

Some of the economic data is also making Americans feel better, including a drop in gas prices.

Democratic candidates, some of whom shunned Biden when he came to their state, are flocking back to his side.

Ohio Democratic Senate nominee Tim Ryan, who was employed the last time Biden was in the state, said he will join the president when Biden is there next Thursday.

And Democratic Senate nominee John Fetterman will be with Biden on Labor Day.

“John will be attending the Pittsburgh Labor Day parade next week and looks forward to speaking with the President about the need to finally decriminalize marijuana,” Fetterman’s campaign said.

Fetterman will be absent from Wilkes-Barre on Tuesday.

https://www.dailymail.co.uk/news/article-11158271/Biden-primetime-speech-Thursday-night-battle-soul-nation.html?ns_mchannel=rss&ns_campaign=1490&ito=1490 Biden to deliver prime-time speech Thursday night on ‘battle for the soul of the nation’

Centrelink cash for thousands of Aussies