The migration crisis will continue to deepen because there are “no consequences” for illegal immigration under Joe Biden’s policies, the president’s top border patrol official claims.

Raul Ortiz accused Biden of creating an environment that enabled the unprecedented surge in southern border migration over the past nearly two years and said it will continue at an “exponential” rate under current policies.

“In my experience, we’ve seen increases when there were no consequences,” the border patrol chief said under oath during a recorded testimony with the Florida Attorney’s Office.

He added in his survey: “It is understood that when migrant groups are told that they may be released, yes you can see an increase.”

“I think it will increase, yes,” he said when pressed on whether illegal immigration will continue to increase.

Despite the second straight month of fewer encounters at the southern border, led by President Biden and DHS Secretary Alejandro Mayorkas, the numbers are still record-breaking. 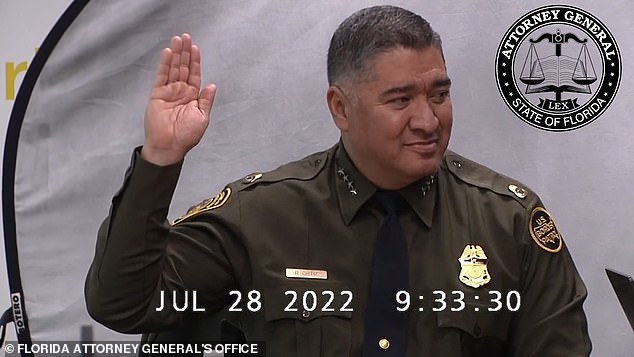 Migrants are being bussed from Texas and Arizona to New York City and Washington, DC to take the heat of illegal immigration out of border states. Pictured: Migrants are greeted as they arrive at the Port Authority bus station in NYC August 30

A migrant child looks on as another bus from Texas arrives at the Port Authority in Manhattan Monday, August 30

In fiscal 2022 so far, Customs and Border Protection (CBP) has encountered more than 2 million migrants at the southern border — a historic number that’s set to rise even further in the most recent quarter.

The highest number of transfers to date was reached in May this year, when CBP reported that it encountered 241,166 migrants in a single month.

In a recorded testimony before the Florida Attorney General, Ortiz said under oath that there was a lack of “consequences” for migrants flooding the southern border.

Ortiz appeared on July 28 for a deposition as part of a discovery in a lawsuit brought by Florida AG Ashley Moody against the Department of Homeland Security (DHS) and border agencies under the department’s jurisdiction.

Ortiz, who has more than 31 years of law enforcement experience, told attorneys representing the state of Florida last month that migrants mostly enter the US illegally because they believe they can stay in the country.

Mayorkas has consistently insisted the southern border is “closed,” despite the surge in illegal immigration numbers since Biden took office.

A migrant from Venezuela shakes hands with a volunteer after arriving in New York City on a bus from Texas. Migrant Enrique Fernandez gets in a car to see his nephew who lives in New York

Biden’s policies, largely based on alternatives to detention programs, have only exacerbated the ongoing border crisis. CBP encounters remain at record levels of more than 2 million so far in fiscal 2022

During the Aspen Security Forum, Mayorkas said that while there was a “historic challenge” at the border, it was still “safe.”

A 2021 DHS memo revealed Biden’s immigration policies, noting that the change in standards helped fuel the influx of migrants

In the document, which Moody shared with Fox in April, he noted that one of the main reasons for increased migration was “perceptions of favorable US immigration policies.”

Alternatives to detention programs, which are a big part of Biden’s immigration policy, aren’t particularly effective. In most cases, the migrants eventually manage to escape the system and disappear into the United States

When asked during testimony last month if the border crisis is currently “less safe for Americans and foreigners alike,” Ortiz replied, “Yes.”

The Florida lawsuit will be heard in January 2023 in the US District Court for the Northern District of Florida.

When asked during testimony last month if the border crisis is currently “less safe for Americans and foreigners alike,” Ortiz replied, “Yes.” Pictured: Migrants scale a steep and rocky hill to seek asylum in the United States after being smuggled across the Rio Grande River in Roma, Texas, August 27

It comes as the mayors of New York City and Washington, DC are asking for help with the crisis that has hit the cities after Texas Gov. Greg Abbott launched an initiative to send migrants out of his state.

Thousands of migrants, sent on buses, arrive in the nation’s capital and the Big Apple.

Abbott launched the program in mid-April to bring the issue closer to elites and Democratic lawmakers who insist the borderline situation is not a crisis.