Bill Gates has been spotted in Australia with a mystery woman while sightseeing in Sydney outside of the city’s famous Opera House.

The pair appeared to be taking a stroll around town as they stopped to admire the panoramic harbor view.

It’s not known who the billionaire Microsoft founder was spotted with, or the nature of their relationship, but the two stood together to take in the stunning view.

Gates, 67, split from his wife Melinda French Gates in 2021 after 34 years together and 27 years of marriage.

The billionaire is currently Down Under after attending a meeting with Anthony Albanese, the Prime Minister of Australia. 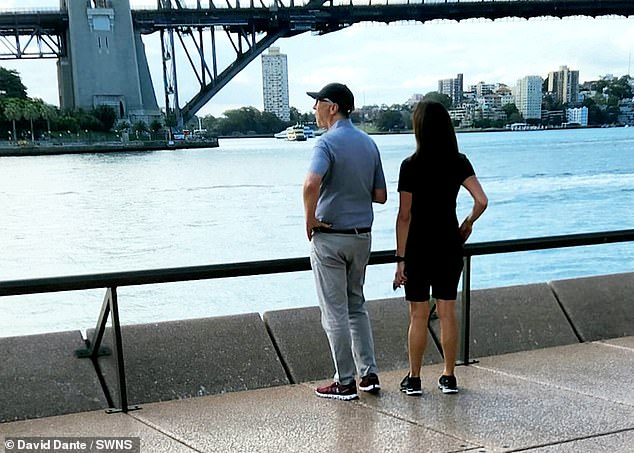 Billionaire Bill Gates was photographed with a woman outside the Sydney Opera House on January 23, 2023

The business tycoon was spotted with the mysterious brunette gazing out over Sydney Harbor on January 23, 2023

The tech tycoon and philanthropist wandered around the facade of the Sydney Opera House with the mysterious brunette.

In the photos, Gates, who is estimated to be the fourth richest person in the world, maintained his usual restraint as his personal safety was not seen.

Gates’ ex-wife and mother of their three children previously opened up about her “incredibly painful” divorce, saying she “just couldn’t stay in this marriage anymore.”

Melinda French Gates told Fortune magazine in October that the Covid-19 pandemic has helped her “have the privacy to do what she had to do.”

She also said in 2021 that her husband’s affair with a Microsoft employee in 2000 broke “trust” in their marriage.

She described sobbing on the floor as her marriage fell apart, although she never thought the relationship would end in divorce.

The couple’s divorce settlement is the second most expensive in America, behind Jeff Bezos’ $38.3 billion split from his ex-wife MacKenzie Bezos.

The tech tycoon and philanthropist wandered around the outside of the Sydney Opera House with the mystery brunette on January 23, 2023

Bill and Melinda Gates pose for a photo February 1, 2019 in Kirkland, Washington

The Microsoft founder is currently down under after attending a meeting with Anthony Albanese, the Prime Minister of Australia.

The two met at the Prime Minister’s residence at Kirribilli House to discuss climate change, energy and health issues.

Gates is visiting the country with the Gates Foundation and representatives from his company Breakthrough Energy, which drives innovation in sustainable energy and technologies to reduce greenhouse gas emissions.

He thanked and commended the Prime Minister for his “great partnership” on international health issues, including the Global Fund to Fight AIDS, Tuberculosis and Malaria.

Gates also made headlines on his trip after warning Australia must be prepared for the next pandemic, which he says could be man-made and far more brutal than Covid-19.

Speaking to the Lowry Institute in Sydney earlier this week, Gates said political leaders need to settle their differences and work together to prepare for the next virus.

“In the pandemic, we were foolish not to have the tools, the practice and the global capacity to be prepared like we do with fire or earthquakes,” he said.

Calling for greater global cooperation, the billionaire philanthropist said the Covid-19 pandemic is an example of how countries could improve their response if they worked together.

Gates’ $70 million Gulfstream was spotted on the tarmac at Kingsford Smith Airport in Sydney on January 24, 2023

But the tech pioneer has also been criticized for using his $70 million private jet while continuing to preach about the dangers of climate change.

The $70 million Gulfstream spotted on the tarmac at Sydney’s Kingsford Smith Airport burns about 1,700 liters of fuel per hour.

Gates is believed to own four private jets, which has drawn criticism from both his supporters and critics.

The private jet collection is said to be worth $194 million and includes two Gulfstream G650ERs, valued at $70 million each, which can carry up to 18 passengers.

In his 2021 book, How To Avoid Climate Disaster, Gates admitted his double standards and said he was aware that he was an “imperfect ambassador for climate change.”

He wrote: “The world is not short of rich men with big ideas about what other people should be doing, or who believe that technology can solve any problem.

“I own big houses and fly in private planes – in fact I took one to the climate conference in Paris, so who am I to lecture anyone about the environment?

“I plead guilty to all three counts. I can’t deny being a rich guy with an opinion. However, I believe it is an informed opinion and I am always trying to learn more.’

https://www.dailymail.co.uk/news/article-11674723/Billionaire-Bill-Gates-snapped-woman-outside-Sydney-Opera-House.html?ns_mchannel=rss&ns_campaign=1490&ito=1490 Billionaire Bill Gates was snapped with a woman outside the Sydney Opera House