Politicians in both parties have started to become wary of TikTok, particularly accounts run by Chinese state-run media they believe are trying to influence American politics.

Republicans, like Senator Tom Cotton of Arkansas, believe the app itself is part of a greater attempt to ‘corrupt young Americans and teach them to hate their country.’

There’s specifically anger behind a company known as MediaLinks TV, ‘a registered foreign agent’ and Washington’s outpost of the Chinese Communist Party, which has an account that often attacks Republicans.

However, it’s not just Republicans who are angry at the video platform, with Senator Mark Warner of Virginia saying that the CCP is taking ‘a page right out of the Russian playbook’ to attempt to interfere in American elections. 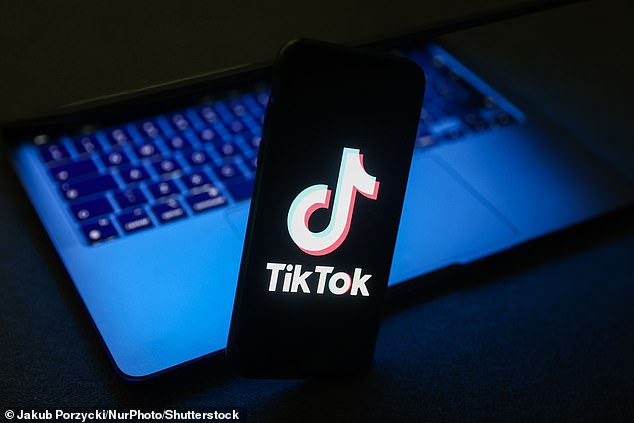 Politicians in both parties have started to become wary of TikTok , particularly accounts run by Chinese state-run media they believe are trying to influence American politics

Republicans , like Senator Tom Cotton of Arkansas , believe the app itself is part of a greater attempt to ‘corrupt young Americans and teach them to hate their country’

American companies invested in TikTok have been courting and donating millions of dollars to Democrats, DailyMail.com has learned – just as President Joe Biden is pushing to let the Chinese social media app continue to operate in the US despite growing concerns about its real agenda.

Top Republican lawmakers and some federal officials believe TikTok is being used to steal consumer data and spread Beijing-backed propaganda to influence the upcoming midterm elections.

TikTok’s parent company ByteDance has lured politically well-connected financial backers in the US after it plowed billions of dollars of investments into the wildly successful app that now has a billion users worldwide – including about a third of all Americans.

‘If you’re curious why Joe Biden and the Democrats have kicked the can on TikTok for so long, just follow the money,’  Republican Senator Senator Josh Hawley told DailyMail.com

‘ByteDance hires top Democrat staffers as lobbyists and their corporate allies donate millions to Democrats. This is the same company that won’t even commit to stop sending American data overseas to the CCP [Chinese Communist Party]. The Democrats’ cronyism is putting the American people at risk.’

Trump along with other Republican lawmakers have raised privacy concerns over the app that is used by hundreds of millions of users worldwide.

‘Well, I think Donald Trump was right,’ Warner told Fox News reporter Shannon Bream. ‘So if you’re a parent, and you’ve got a kid on TikTok, I would be very, very concerned. All of that data that your child is inputting and receiving is being stored somewhere in Beijing.’

Warner added that TikTok is a broadcasting network – and if the Chinese Communist Party wanted to promote propaganda about the CPP and convince the younger generation that the country is apart of Taiwan, then they could.

Brendan Carr, commissioner of the Federal Communications (FCC) also called for halt of the app on Google and Apple earlier this year.

Carr posted on Twitter in June urging the tech giant to remove the video sharing platform ‘from their app stores for its pattern of surreptitious data practices.’

Sen. Mark Warner of Virginia said that former President Donald Trump was right about TikTok and warned for parents to keep their kids off the social media app

Warner insisted TikTok served as a broadcasting network and said that if the Chinese Communist Party wanted to push propaganda, then they could

The commissioner included a letter to Google CEO Sundar Pichai and Apple CEO Tim Cook, expressing why TikTok needs to be removed, citing a report from last week that ‘shed fresh light on the serious national security threats posed by TikTok.

‘It is clear that TikTok poses an unacceptable national security risk due to its extensive data harvesting being combined with Beijing’s apparently unchecked access it that sensitive data, Carr wrote in the letter.

‘But it is also clear that TikTok’s pattern of conduct and misrepresentation regarding the unfettered access that persons in Beijing have to sensitive US user data puts it out of compliance with the policies that both of your companies require every app to adhere to as a condition of remaining available on your app store.’

The letter continues with ‘some concerning’ evidence about why the China-owned app should be removed.

Carr also notes that several US military branches have banned TikTok on government-issued devices and have urged personnel to remove the app from their personal smartphones.

Brendan Carr, commissioner of the FCC, posted on Twitter urging the tech giants to remove the video sharing platform ‘from their app stores for its pattern of surreptitious data practices’

In November, MailOnline reported that the China-owned app was used to spy on UK user data.

Elaine Fox, TikTok’s head of privacy in Europe, claimed this is to ensure its ‘global workforce’ can make TikTok ‘consistent, enjoyable and safe’.

While the type of data that is shared across the world has not been specified, it could include names, phone numbers, ages, emails, and approximate locations.

Trump signed an executive order that would ban TikTok and the Chinese chat app WeChat in the US in August 2020. It was later revoked by President Joe Biden

In August 2020, Trump signed an executive order that would ban TikTok and the Chinese chat app WeChat in the US.

President Joe Biden last year revoked executive orders from Trump and produced a new executive order that nixed the unimplemented ban on TikTok and called for ‘an evidence-based analysis to address the risks’ from internet applications controlled by foreign entities.

TikTok has acknowledged access to its user data has been a problem.

After Trump issued an executive order banning the app, the ACLU said it was ‘an unprecedented abuse of emergency powers’ and a First Amendment violation.

The organization also campaigned in 2020 to shut down the Department of Justice ‘China Initiative’ which scrutinized Chinese influence in scientific research and academia.

Other Sequoia staff have close connections to Biden and his administration.

In 2020 and 2021 he served as a member of the National Security Council Agency Review Team and ‘led the confirmation teams of the Director of the Central Intelligence Agency and the Deputy Secretary of Defense’ according to his profile on the World Economic Forum website.

Republicans have continued to push against TikTok and what they believe is bias against them.

Marco Rubio of Florida told Fox News: ‘It is laughable that TikTok, an app that I have been warning about for years, allowed a foreign smear campaign to run against me unaddressed.’

Senator Ted Cruz of Texas added, “TikTok is used by the Chinese Communist Party for spying and propaganda… It is long past time for the U.S. to take action against it.”

Gordon Chang, an expert of China, said that there are only two alternatives in combating TikTok.

He said: ‘Ban TikTok in the United States or force a sale of all ownership to an American company…. Beijing has to have nothing to do with TikTok.’

The “oldest man in the world” celebrates his “122. birthday” in Brazil

8 hours ago
Back to top button