The heroic moment a Bondi Rescue star saved a young girl seconds from drowning has resurfaced as loved ones pay tribute to the late lifeguard.

Terry McDermott saved countless swimmers on various beaches during his career as a lifeguard before he died on September 1 after a battle with cancer.

But one rescue that resonated with both Mr McDermott and fans of the hit Australian TV show was the rescue of a young child on Sydney’s famous Bondi Beach.

Mr McDermott observed from shore that the girl was struggling to stay afloat and kept disappearing under the water. 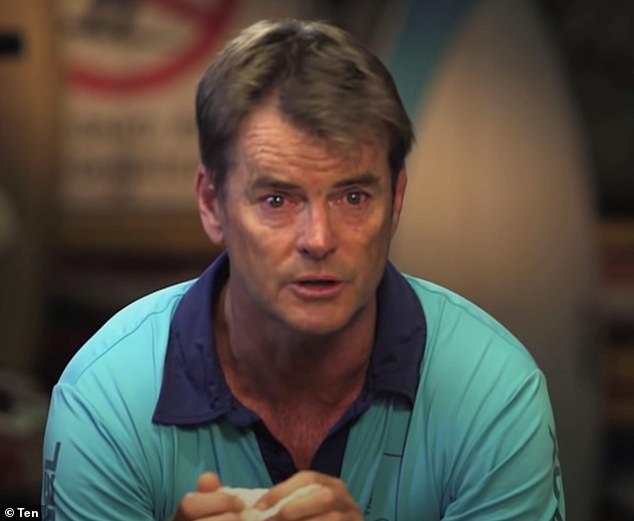 As nearby swimmers were unaware that the girl was in serious trouble, the lifeguard immediately dived into the water with his rescue board.

“You have to undress, get the board, get in the water, hope you don’t get slowed down by incoming waves and sprint to the patient,” McDermott said at the time.

He was able to reach the girl just in time and pulled her onto his board while she gasped for air.

‘Many Thanks!’ she said between breaths.

McDermott was able to bring the girl back to shore safely

The pair returned safely to shore, and Mr McDermott told the young girl’s mother that she almost drowned.

“She was definitely at a point, at a serious point, when I reached out to her,” he said.

It was a particularly emotional rescue for the veteran lifeguard, as he lost his own son just a week after birth.

“Especially with such (rescue) little kids because I lost my son, I know that feeling,” he said.

“My boy was trapped in the birth canal and had complications that cut off the oxygen for ten minutes, but the result was he died a week later.

“Whenever I save a little child, it comes to the surface. If she (the mother) lost this beautiful little girl, she would know what I’m talking about.”

Mr McDermott’s colleagues described him as “one of the nicest watermen to put on a leotard” as they paid tribute to his 30-year lifeguard career during which he saved “countless” lives.

Mr McDermott is survived by his wife Joanna and son Matt.

Mr McDermott worked as a lifeguard on the NSW Central Coast for 20 years and as a patrol on Bondi Beach for 10 years.

He died surrounded by family and friends after a battle with cancer.

Tributes to Mr. McDermott flowed from fans of the show around the world.

“Thats really sad. I will pray for you, your family and your lifeguard family. You were an incredible lifeguard. I loved watching Bondi on YouTube here on the US east coast. This breaks my heart,” wrote one international fan.

“RIP Terry. thank you for being you Thank you for your service. What a great man you were. May you rest in peace.’

“I’ll miss you mate, it never gets boring. You were a great Aquarius and always had some great wisdom to pass on to the young people. We had some great times together, you are missed,” Mr Maxwell wrote.

“Terry was a charismatic, articulate character who always had a wonderful story to tell,” the Sunshine Coast lifeguards posted in tribute.

“He was a friend and colleague of many lifeguards across the country and indeed well known around the world.”

Mr McDermott had been documenting his battle with prostate cancer on social media since his diagnosis on Anzac Day in 2020.

Bondi Rescue lifeguard Terry McDermott, who has died of cancer, is pictured with his wife Joanna