Boris Becker has sensationally questioned whether Nick Kyrgios told the truth about the knee injury that ruined his Australian Open campaign before it even started.

The Australian star announced he would abandon his home grand slam on Monday due to a torn meniscus in his knee and a cyst in the joint.

Kyrgios and his physio Will Maher said the injury first became a problem about two weeks earlier and they used his charity match against Novak Djokovic last Friday night as a test of whether he would survive the tournament. 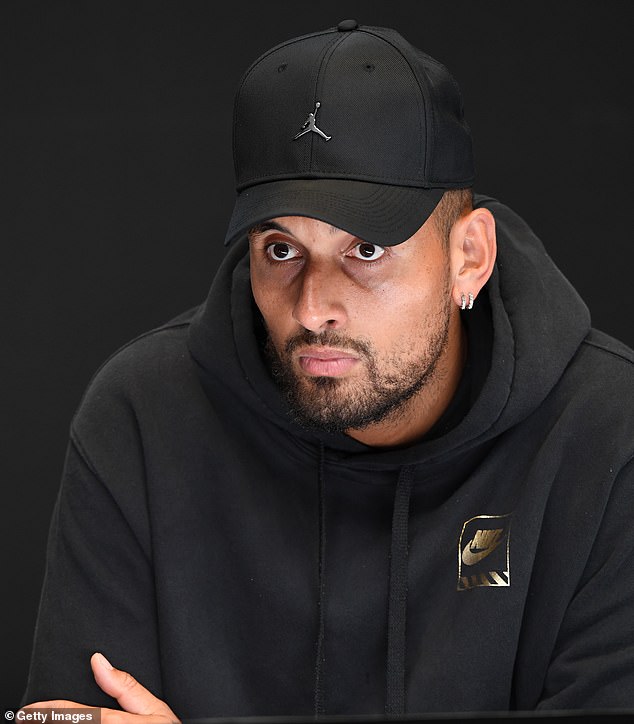 A shaken Kyrgios shocked the tennis world when he announced he was retiring from the Open on Monday with a knee injury – just 24 hours before his first match was due to start. He and his physical therapist, Will Maher, said the joint had become a problem two weeks earlier

The 27-year-old had poor preparation for the Open as he was unable to play a pre-tournament due to an ankle injury sustained while playing in Dubai.

However, Becker doubted this version of events.

“It didn’t look like it on Friday night when he played two sets against Djokovic,” he told Eurosport of Kyrgios’ injury struggle.

“He has spoken about injuries before, but in the ankle and not the knee.

“But what Nick Kyrgios says and what he does are often two different things.”

The pair have had a feud in the past, with the Aussie taking on the three-time Wimbledon champion in 2020.

Kyrgios made a social media post with a photo of himself playing with Team World in the Laver Cup, captioned “different race” – to which Becker commented, “In your dreams.”

The Canberran hit back, writing: “Lingering like a bad smell maybe hoping to get more likes and followers. Unfortunately never be that influential.’

He then followed on Twitter with: “He didn’t want to coach me anymore obviously because he’s in dire need of a paycheck but hates on my Instagram. Strange world we live in.’

They had an ongoing online feud in 2020, with Kyrgios making candid comments about tennis stars and their behavior amid the coronavirus pandemic.

The German great (pictured with Martina Navratilova after winning the second of his three Wimbledon titles in 1986) has previously called Kyrgios a “rat”.

The incident prompted Becker to refer to Kyrgios as a “rat”.

“Don’t like #rats! Anyone who scolds a fellow athlete is not a friend of mine! Look at yourself in the mirror and think you’re better than us,” Becker tweeted.

“Boris Becker is a bigger donut than I thought,” Kyrgios replied. ‘Can hit a volley but obviously not the sharpest tool in the shed.’

Is The Last of Us Part 1 on PlayStation Plus?