United Nations Secretary-General Antonio Guterres has led tributes from world leaders in memory of the last Soviet leader Mikhail Gorbachev, who died at 91.

In a statement, Guterres described Gorbachev as ‘as a unique leader who changed the world for the better’.

Gorbachev was ‘a one-of-a kind statesman who changed the course of history. He did more than any other individual to bring about the peaceful end of the Cold War,’ Guterres said.

Moscow’s Central Clinical Hospital said the former Soviet President died after a long illness. No other details were given.

‘In the morning he will send a telegram of condolences to his family and friends.’

British Prime Minister Boris Johnson tweeted: ‘I’m saddened to hear of the death of Gorbachev. I always admired the courage & integrity he showed in bringing the Cold War to a peaceful conclusion.

‘In a time of Putin’s aggression in Ukraine, his tireless commitment to opening up Soviet society remains an example to us all.’

US President Biden hailed a ‘man of remarkable vision’. 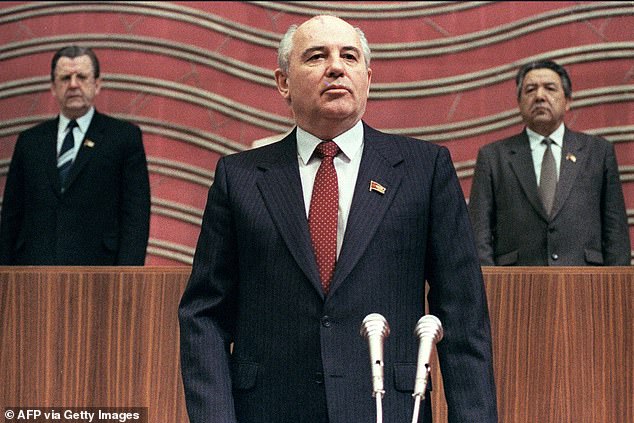 Mikhail Gorbachev (pictured centre) who has died aged 91, was the last leader of the Soviet Union, in power from 1985 to 1991

British Prime Minister Boris Johnson tweeted: ‘I’m saddened to hear of the death of Gorbachev. I always admired the courage & integrity he showed in bringing the Cold War to a peaceful conclusion’

The Ronald Reagan Foundation and Institute stated it ‘mourns the loss of Soviet leader Mikhail Gorbachev, a man who once was a political adversary of Ronald Reagan’s who ended up becoming a friend. Our thoughts and prayers go out to the Gorbachev family and the people of Russia’

The funeral of Mikhail Gorbachev poses a nightmare for the West – as it does for Vladimir Putin.

The ex-Soviet leader’s death in the midst of the war in Ukraine, and a breakdown in relations with America and Europe, will likely prevent major world leaders or Western elder statesmen travelling to Moscow to pay their last respects.

Yet when Boris Yeltsin died in 2007, ex-US presidents George Bush senior and Bill Clinton both attended and for Britain Prince Andrew – then a working royal – and ex-premier Sir John Major flew to Moscow.

And when Gorbachev’s predecessor in the Kremlin, Konstantin Chernenko died in 1985, a clutch of serving Western leaders attended the funeral.

They included British premier Margaret Thatcher and the US vice president George Bush.

Western leaders had also attended the earlier funerals of Leonid Brezhnev and Yury Andropov in the 1980s.

At the time, in the Cold War, the funerals were used for discreet contacts between east and west.

It is not immediately clear if Putin will permit a full scale state funeral for Gorbachev, who was president of the USSR which no longer exists.

Nor is it clear yet if he will attend, as would be expected.

Putin was no fan of Gorbachev who he blamed for the dismantling of the Soviet Union, which he saw as a catastrophe.

Yet for Western leaders Gorbachev is seen as a political giant whose passing should be honoured.

But with sanctions imposed by the West on Russia, he is unlikely to want to host Western leaders who despise him and allow them to honour Gorbachev in Moscow.

Putin may also have concerns at revealing close up to Western leaders or elder statesmen and women his true health condition at a time when rumours of his medical condition are rife and his public appearances are rare and often painstakingly choreographed.

Biden added: ‘When he came to power, the Cold War had gone on for nearly 40 years and communism for even longer, with devastating consequences. Few high-level Soviet officials had the courage to admit that things needed to change.

‘As a member of the Senate Foreign Relations Committee, I saw him do that and more. As leader of the USSR, he worked with President Reagan to reduce our two countries’ nuclear arsenals, to the relief of people worldwide praying for an end to the nuclear arms race.

‘After decades of brutal political repression, he embraced democratic reforms. He believed in glasnost and perestroika – openness and restructuring – not as mere slogans, but as the path forward for the people of the Soviet Union after so many years of isolation and deprivation.

‘These were the acts of a rare leader – one with the imagination to see that a different future was possible and the courage to risk his entire career to achieve it. The result was a safer world and greater freedom for millions of people.

‘Even years after leaving office, he was still deeply engaged. When Mr. Gorbachev visited the White House in 2009, he and I spoke for a long time about our countries’ ongoing work to reduce U.S. and Russian nuclear stockpiles. It was easy to see why so many worldwide held him in such high esteem.

‘We send our deepest condolences to his family and friends, and to people everywhere who benefited from his belief in a better world.’

During his seven years in office, Gorbachev waged a losing battle to salvage a crumbling empire but is seen by many to have produced extraordinary reforms that led to the end of the Cold War.

After their first meeting, British Prime Minister Margaret Thatcher famously quipped that Gorbachev was a man she ‘could do business with’.

Former US secretary of state Henry Kissinger said Mikhail Gorbachev ‘performed great services’ but was ‘not able to implement all of his visions’, telling BBC’s Newsnight: ‘The people of eastern Europe and the German people, and in the end the Russian people, owe him a great debt of gratitude for the inspiration, for the courage in coming forward with these ideas of freedom.’

Mr Kissinger, after again acknowledging Mr Gorbachev was unable able to implement his full vision, added: ‘He will still be remembered in history as a man who started historic transformations that were to the benefit of mankind and to the Russian people.

‘Personally he was very charming, very pleasant, not very political even though he came from a political party of the Soviet Union and then in later life, he withstood his isolation with considerable dignity.

‘Russia never went back to the sort of dictatorship that characterised it in the Stalin years and even in the period proceeding Gorbachev.

‘Even under Putin there are elections that are not Western style elections but they go further than had existed before and the legacy of what he put forward still lingers in all the various opposition groups that exist in Russia and as the Russian system evolves the legacy of Gorbachev will reappear in various forms.’

Labour leader Sir Keir Starmer wrote: ‘[Gorbachev] will forever be remembered as the last leader of the Soviet Union who had the courage and conviction to end the Cold War’

President of the EU Commission, Ursula Von Der Leyen posted: ‘Mikhail Gorbachev was a trusted and respected leader. He played a crucial role to end the Cold War and bring down the Iron Curtain’

In a tribute, Labour leader Sir Keir Starmer wrote: ‘One of the great figures of the 20th Century, Mikhail Gorbachev’s pursuit of reform forged a path for diplomacy over conflict. He will forever be remembered as the last leader of the Soviet Union who had the courage and conviction to end the Cold War.’

President of the EU Commission, Ursula Von Der Leyen posted: ‘Mikhail Gorbachev was a trusted and respected leader. He played a crucial role to end the Cold War and bring down the Iron Curtain. It opened the way for a free Europe. This legacy is one we will not forget. R.I.P Mikhail Gorbachev.’

French President Emmanuel Macron described Gorbachev as ‘a man of the world, whose choice opened the way to freedom for Russians’.

He added: ‘His commitment to peace in Europe has changed our shared history.’

Former US Secretary of State Condoleeza Rice wrote: ‘I am saddened to hear of the passing of Mikhail Gorbachev. He was a man who tried to deliver a better life for his people.

‘His life was consequential because, without him and his courage, it would not have been possible to end the Cold War peacefully.’

Former US Secretary of State Condoleeza Rice wrote: ‘His life was consequential because, without him and his courage, it would not have been possible to end the Cold War peacefully’

The Ronald Reagan Foundation and Institute stated it ‘mourns the loss of Soviet leader Mikhail Gorbachev, a man who once was a political adversary of Ronald Reagan’s who ended up becoming a friend.

Though in power less than seven years, Gorbachev unleashed a series of pivotal changes. But they quickly overtook him and resulted in the collapse of the authoritarian Soviet state, the freeing of Eastern European nations from Russian domination and the end of decades of East-West nuclear confrontation.

His decline was severe. His power was sapped by an attempted coup against him in August 1991 and he spent his last months in office watching republic after republic declare independence until he resigned on December 25, 1991.

The Soviet Union wrote itself into oblivion a day later.

‘His death tells us how far Russia has moved away from his vision,’ wrote former UKIP leader Nigel Farage

A quarter-century after the collapse, Gorbachev told The Associated Press that he had not considered using widespread force to try to keep the USSR together because he feared chaos in a nuclear country.

‘The country was loaded to the brim with weapons. And it would have immediately pushed the country into a civil war,’ he said.

Many of the changes, including the Soviet breakup, bore no resemblance to the transformation that Gorbachev had envisioned when he became the Soviet leader in March 1985.

By the end of his rule he was powerless to halt the whirlwind he had sown. Yet Gorbachev may have had a greater impact on the second half of the 20th century than any other political figure.

‘I see myself as a man who started the reforms that were necessary for the country and for Europe and the world,’ Gorbachev told The AP in a 1992 interview shortly after he left office.

‘I am often asked, would I have started it all again if I had to repeat it? Yes, indeed. And with more persistence and determination,’ he said.

Gorbachev won the 1990 Nobel Peace Prize for his role in ending the Cold War and spent his later years collecting accolades and awards from all corners of the world. Yet he was widely despised at home.

Russians blamed him for the 1991 implosion of the Soviet Union – a once-fearsome superpower whose territory fractured into 15 separate nations. His former allies deserted him and made him a scapegoat for the country’s troubles.

The official news agency Tass reported that Gorbachev will be buried at Moscow’s Novodevichy cemetery next to his wife.