A businessman broke down in tears in court when a jury heard the troubling 911 call from one of his employees trying to save the life of a man trapped in a tire crusher.

The jury of nine women and three men heard the sound of power cutters being used to extricate Martin Simmons, 38, from the newly installed machine.

When Mr Simmons appeared to stop breathing, workers were told to remove him from the machine and perform CPR.

Mr Simmons was taken to hospital but suffered serious brain damage after the main artery in his neck was crushed. He died two weeks later.

His fiancée, Tina Simmons, “married” him at his hospital bedside just days before his death.

Ms Simmons donned her wedding dress for a heartbreaking ceremony in March 2019, before her husband’s life support was turned off. 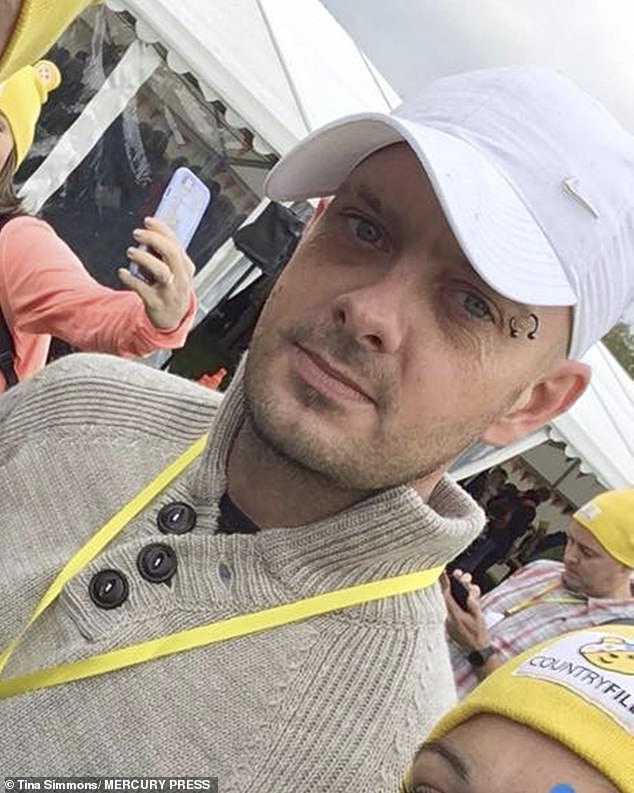 Martin Simmons, 38, died after being trapped in the machine. The case was dropped in court when the defendant, Kyle Gettings, and the jury were visibly upset at the recording of the incident

Mr Simmons (pictured) had proposed to fiancee Tina (pictured), 35, two years before his death and the couple were due to fly to Cuba for their dream wedding in April 2020

The judge halted the proceedings after the recording of the incident at Gloucester Crown Court was played when defendant Kyle Gettings and the jury members were visibly upset.

He pleaded guilty to failing to ensure the health and safety of his employees while working with the machines.

Prosecutor Philip Stott told the jury that on February 20, 2019, Mr. Simmons loaded tires onto the conveyor and oversaw shredded tires as they exited the machine on the second conveyor.

Mr Stott said: “The machine had no guard rails on the second conveyor. This is neglect as anyone could easily get caught in its functioning.

“There was no process to prevent this while the machinery was running.”

The jury learned that the day before the incident, a TV crew from the Scrap Kings series filmed the tire shredding operation and was shown video footage of what the workers were doing when the machines backed up.

The film showed the machine and conveyor belt in use without protective devices.

It was claimed that the next day, despite being trained to do so by Mr Gettings, staff did not turn off the machine when they freed the jammed conveyor.

The jury heard evidence from Jack Major, who was working with Mr Simmons at the time of the incident, who said to make sure the equipment was turned off before recovering the debris.

Mr Major said: “I had to pick up large shredded items from the floor all the time and put them on the conveyor belt myself, which had no safety devices. I did this because they would quickly become a trip hazard.

“The hopper jammed frequently and the equipment was shut down so we could free the jammed equipment. It’s common sense not to get your hands near it while it was in operation.

“It was not my responsibility to turn the machines on or off. But around 4pm Mr. Simmons was working on the conveyor belt without it shut down while I was doing another task with my back to him.

“I turned around when he shouted ‘Ouch’ loudly. He knelt and was in an unnatural position with his shoulder pinched and his right arm caught in the machine. Mr. Simmons’ neck was sticking out from under the machine.

“I immediately pressed the emergency stop button, which disabled everything in the device. I ran outside and yelled at someone to dial 999.

“As other people took over the situation in the unit, I went to get some disc cutters to get Mr. Simmons out of the machinery, but was told not to use them.

“Instead, I went to the entrance to the business park and directed the emergency services where to go.”

General Manager Gary King told the jury that he operates an office in a makeshift outdoor building.

Mr Simmons’ colleagues (pictured) performed CPR while waiting for paramedics, but he suffered devastating brain damage after a large artery was cut off

He said when he heard someone shout “dial 999,” he did so without knowing what the emergency was.

Mr King said: “When I heard Mr Major yelling for someone to call 999 I did but didn’t know why.

“I walked about half a football field to get to the unit where I saw Mr. Simmons on his knees with his arm wedged between a pulley and the conveyor belt. He did not say anything.

“First I was told by the call handler to make Mr Simmons as comfortable as possible and wait for the paramedics to arrive. But when Mr Simmons stopped breathing, the decision was made to release him from gear.

“Once he was flat on the floor, I began the CPR procedure on Mr. Simmons. I followed exactly the instructions given to me by the call handler. I continued this procedure until the paramedics took over.’

Mr Simmons was subsequently flown to Southmead Hospital in Bristol for treatment.

Despite medical intervention, Mr. Simmons never recovered from his injuries and died 15 days later on March 6.

The jury also heard from other employees what roles they played in the immediate aftermath of the incident, as well as the electricians who installed the equipment.

Electrician Nicholas Barrow said: “I was visiting on the day of the incident to locate a replacement switch for the equipment the company had recently installed.

“I had gone to the machine to see if the spare part would fit in the machine. When I got to the unit, the machinery was in operation and both conveyors were running.

“I noticed that the second conveyor, which was not part of the structure when the machine was commissioned, had no safety measures.

“I was surprised that the machine was used without crash barriers. It was too loud to talk to anyone about my concerns and I left after 15 minutes.’

The jury also heard from the Health and Safety Agency’s Michael Raynor, who visited the site six days after the incident and while Mr Simmons was alive.

Mr Stott told the jury: “Prosecutors say the machinery Mr Simmons was working on was a literal death trap.

“Due to an incorrect adjustment of the hopper, the shredder itself, it often happened that a chute leading from the machine to the second conveyor belt was blocked, which then had to be freed by the workers.

“The conveyor belt would also jam with tire fragments. In practice, the machine should have been completely switched off during this work.”