An 11-year-old boy who was mauled by three pit bulls in his Georgia neighborhood said he is recovering from the attack, which left 70 percent of his scalp missing.

Justin Gilstrap, of Appling, underwent multiple surgeries after the pack of dogs attacked him as he was cycling home on Friday.

In a short clip posted by local WRDW, the injured boy says: “Hey everyone. I love you all. I just want you to know that I’m fine.”

His mother, Ericka Gilstrap, says he is awake and able to speak at short intervals while recovering from the vicious attack. The family started a GoFundMe which has raised more than $220,000 for his medical expenses. 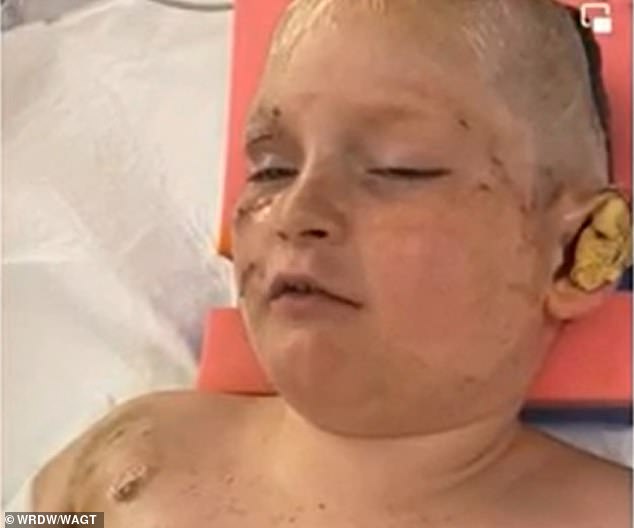 Justin Gilstrap, 11, of Appling, Georgia, underwent multiple surgeries after a pack of pit bulls attacked him on Friday

Despite losing 70 percent of his scalp, the boy was caught on film telling his followers: “I love you all. I just want you to know I’m fine.

Justin was riding his bike in front of his home on Friday, officials said, when his neighbor’s three dogs broke free and began chasing him.

One of the dogs latched onto his leg before the others joined in, dragging him off the road into a nearby ditch.

There they continued to maul him, tearing off pieces of his scalp, ears, chest and legs. The pit bulls devastated Justin to within an inch of his life before running off.

He was found minutes later by relatives lying helpless in the dirt, and Ericka told the Augusta Chronicle that her mother was the one who witnessed the gory scene.

Justin was then taken to the hospital and placed in a medically induced coma while doctors worked to save his life. He remained in a coma until Sunday morning, when Ericka wrote that he woke up.

The dogs’ owner, Burt Baker III, has been charged with reckless behavior as he also admitted that his dogs enjoyed chasing bikes.

Along with the dogs involved in Friday’s attack, Baker turned over four other dogs, pit bull terriers and mixed breed dogs, to authorities. Officials said at least two of the dogs had been vaccinated against rabies.

Baker has been the subject of several complaints related to his pets, and Columbia County officials face close scrutiny over how the case was handled.

“The sad thing is we’ve reported these dogs multiple times,” Erica wrote on the GoFundMe page. “Columbia County did nothing! It’s sad they needed that to finally do something,” she explained.

Justin suffered lacerations all over his body, losing 70 percent of his scalp and half his ear

On January 2, 2022, Baker was subpoenaed by the county after his dogs attacked a neighbor’s Yorkie.

The dogs were then found roaming free in the neighborhood a week later, prompting a final alert from the county.

But in July, Baker had filed another complaint against him because the dogs had been sighted outside his Langston Drive home.

One of the dogs was taken into custody, but Baker was allowed to pay a fee to get the dog back, per state regulations.

Columbia County manager Scott Johnson defended the county, saying they were just playing by the rules and couldn’t simply confiscate the dogs based on their history.

“We’re not naïve to the fact that there might be vicious dogs out there,” he told WRDW. “You just have to attack someone before the district can do anything.

“I’m not saying Columbia County always gets it right. But in this case we are following protocol,” he added.

Doctors put Justin in a medically induced coma as they struggled to stop the bleeding. Finally they managed to close his wounds

As her son begins the long road to recovery, Ericka created the hashtag #JustinTough to raise awareness of his situation.

She told the Chronicle that in addition to his medical expenses, her son will need counseling to cope with the trauma of the attack.

“I hope he doesn’t get PTSD,” Ericka said. “They warned me he’ll probably need therapy just to get him back to where he was.”

She noted that Justin had been in severe pain for the past week and needed a morphine drip, and that he once pulled out his feeding tube out of confusion when waking up one night.

https://www.dailymail.co.uk/news/article-11645689/Boy-11-suffered-horrific-injuries-mauled-three-pit-bulls-says-love-all.html?ns_mchannel=rss&ns_campaign=1490&ito=1490 Boy, 11, who suffered horrific injuries after being mauled by three pit bulls says ‘I love you all’

Dry January or HIGH January? A third of Gen Z adults who give up alcohol this month will use marijuana instead