A 17-year-old boy has been stabbed and a second teenager is in life-threatening condition after a “mass machete brawl” broke out in east London.

Emergency services rushed to the scene following reports of a disturbance involving a large number of people in Bow, Tower Hamlets.

There are reports that the riots at Lichfield Road, E3, affected around 100 people, some armed with machetes, after a row over uninvited people attending a party.

Officers at the scene noticed two men with stab wounds from the attack, which took place in the early hours of Sunday morning.

A Met Police spokesman told MailOnline: “On Sunday 4 September at 00:09 police were called to reports of a disturbance involving a large number of people at Lichfield Road, E3

“Medics from the London Ambulance Service and the London Air Ambulance were present. Both men were taken to a hospital in east London.

“Despite the best efforts of medical staff, one of the men – believed to be 17 years old – was pronounced dead at 1:54 am.

“The second man – who is believed to be 18 – remains in critical condition.” 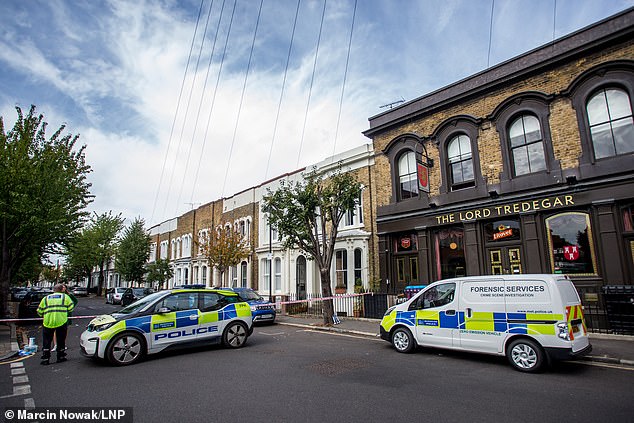 A 17-year-old boy has been stabbed and another teenager is in a life-threatening condition after a “mass machete brawl” broke out in east London. Pictured: Police at the scene at Lichfield Road, Bow

Police have launched an investigation but no arrests have been made. Forensic teams (pictured) were seen at the scene

One of the victims suffered a stab wound to the neck, reports GB News.

Police have launched an investigation into the attack, but no arrests have been made so far.

Officers and forensic teams were pictured on the street, which was cordoned off earlier today.

Anyone with information was asked to contact the police.

This comes after a spate of recent attacks in Lawless London as pressure mounts on Mayor of London Sadiq Khan to better tackle the scourge of knife crime, which has increased over the past year as the UK exited the Covid pandemic.

Mr Khan said on social media shortly after the stabbing broke: “Violent crime tears families and communities apart. It has no place in London and I am committed to tackling both violence and the complex causes of violence. Prevention and early intervention are key to making London safer for everyone.”

However, it is not yet clear if he was reacting to the recent attack in London.

In August, six suspected murders were committed in London in four days, including the fatal stabbing of veteran charity fundraiser Thomas O’Halloran, 87, while traveling in his mobility scooter.

Several others have been stabbed or shot dead in the capital in recent weeks as rival politicians urged the mayor to do more.

“We have lost 21,000 officers, the government has now said they will replace them with 20,000 officers as our population increases.

“We’ve had cuts in youth workers, youth services, after-school clubs and services that councils are providing as a result of the Government’s decision and it’s Londoners who are caught in the crossfire.”

Jay Stansfield wears the No 9 shirt for Exeter City, just like his father Adam