A Brazilian economist has buried three consecutive children from cancer in less than five years while battling the disease himself.

All four family members learned in 2016 that they have a rare genetic disorder that increases a person’s and their family’s risk of developing cancer. The disorder, Li-Fraumeni syndrome, affects just 5 in 20,000 families around the world.

Beatriz Feitosa was diagnosed with acute lymphocytic leukemia in 2017 at the age of 9 and underwent a bone marrow transplant. However, the cancer returned and she died just a year later on June 24, 2018 at the age of 10.

Next, the father lost his son Pedro, who was only 17 when he was diagnosed with osteosarcoma, a bone cancer. He was cured on four separate occasions and then contracted brain cancer in 2019 and died on November 30, 2020 at the age of 22.

“In four and a half years I’ve lost all my children,” Regis told BBC News Brazil. 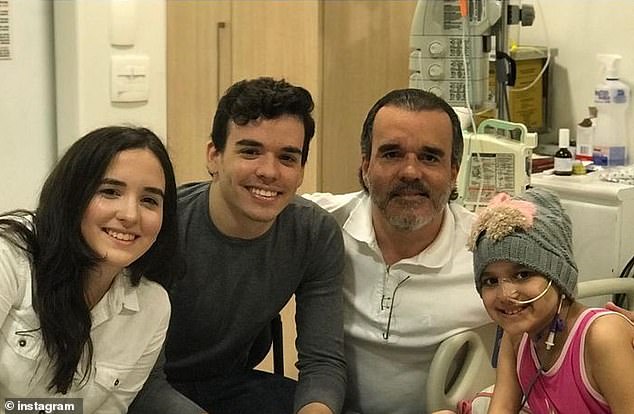 Brazilian economist Régis Feitosa was diagnosed with Li-Fraumeni syndrome in 2016, a rare genetic disorder that increases a person’s and their families’ risk of developing cancer. His three children were diagnosed with the same syndrome and died of cancer within five years

Régis, who was first diagnosed with cancer himself in 2009, became concerned that the cancers were linked and decided to genetically test all his children.

The blood test revealed that Régis had Li-Fraumeni syndrome, a rare genetic disorder that increases a person’s and their families’ risk of cancer.

“The results showed that I had a genetic alteration, which unfortunately was also passed on to my children, and which potentiates the incidence of cancer,” he explained.

The family discovered in 2016 that they shared the rare mutation, but little could be done to halt the emergence of deadly cancers.

“Li-Fraumeni syndrome cannot be prevented,” according to the Cleveland Clinic.

Régis’ eldest daughter, Anna Carolina, was only 25 when she died of a brain tumor on November 19

Régis’ youngest daughter (left), Beatriz (right), was just 9 years old when she was diagnosed with acute lymphocytic leukemia in 2017. She died on June 24, 2018 at the age of 10

Régis, who learned in 2021 that he had non-Hodgkin lymphoma, said his parents did not have the hereditary condition.

According to the Cleveland Clinic, any person who has the syndrome has about a 90 percent chance of being diagnosed with one or more types of cancer at some point in their life and a 50 percent chance of developing the disease before age 30 .

Women with Li-Fraumeni syndrome have an almost 100 percent chance of developing breast cancer at birth.

“Li-Fraumeni syndrome occurs when something changes in the TP53 gene, which contains the instruction manual for making a protein called tumor protein 53, or P53,” the clinic’s website says.

The Brazilian economist, who suffers from chronic leukemia and non-Hodgkin’s lymphoma, has his blood drawn during a doctor’s visit

The P53 protein acts as a tumor control and can prevent cells from dividing and growing too quickly or in a way that cannot be controlled before they develop into a tumor.

Régis, who is still being treated for chronic leukemia and non-Hodgkin lymphoma, said he never felt guilty about passing Li-Fraumeni syndrome on to his three children.

“My kids said I was just as much a victim as they were,” he said.

The grieving father added that his family’s ordeal was no worse than anyone else’s.

“Today I believe that we must live intensely and with the greatest joy,” said Régis. “My son said a very coherent sentence: ‘No one can measure the pain of another.’

“I don’t think there’s a bigger or smaller problem, the fact is we can’t measure each other’s pain.”

https://www.dailymail.co.uk/news/article-11482941/Brazilian-economist-lost-three-children-cancer-5-years-battled-disease-himself.html?ns_mchannel=rss&ns_campaign=1490&ito=1490 Brazilian economist lost three children to cancer in less than 5 years while battling the disease himself