A British pensioner accused of killing his terminally ill wife is back before a Cypriot court and has revealed how prison authorities refused him permission to go to church on the anniversary of his wife’s death.

David Hunter, 75, has been in custody for more than a year after he was arrested and accused of murdering his wife Janice, 74, who has blood cancer, at their retirement home on the island.

For the past month, lawyers representing him had been led to believe a plea bargain had been agreed and that he would plead guilty to manslaughter on settled facts, paving the way for a possible pity release.

But instead, a district court judge in Paphos, a popular British holiday resort in western Cyprus, opted to move his case forward as a murder trial in a dramatic about-face. 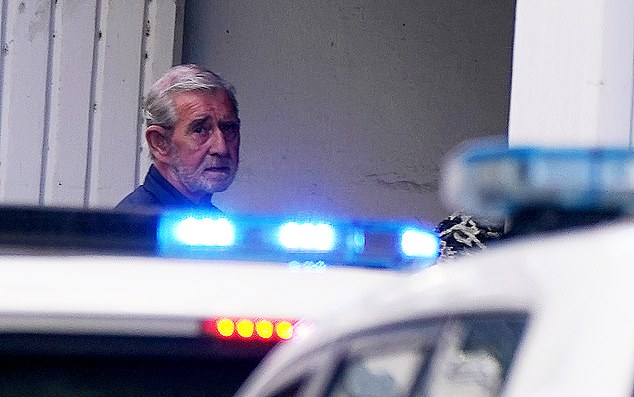 David Hunter, 75, has been in custody for more than a year after being arrested and accused of murdering his wife Janice, 74, who has blood cancer (pictured today).

The details of how Ms Hunter died have not been released.

Sitting in court today, he revealed how he had asked Nicosia prison officials if he could go to church last month to commemorate the death of his wife on December 18, 2021.

He said: “I put everything in writing, but I never heard from them, so I didn’t have a chance.

“I was dying to go and put the request through the right channels but got no response. So if I didn’t get an answer, it meant they denied me permission.”

Speaking of the start-stop process of the process, he said: “It’s all very stressful, you build yourself up the night before and get up at 5.30am in the day to do a 90-minute drive from jail to court and then on a few minutes it’s adjourned.

“The back and forth only exhausts you and leaves you discouraged, but I will take each day as it comes and I have placed my trust in my legal team and family.”

The Northumberland couple retired to Paphos 20 years ago and Ms Hunter was suffering from blood cancer, an illness from which her sister had died.

They were married for 46 years and Janice was on heavy medication for a type of terminal blood cancer when she died.

Last month, judges dramatically turned the case into a murder trial – after Hunter was expected to plead guilty to manslaughter

Mr Hunter said he only wished the process could be over so he could start mourning his wife (the couple are pictured on their wedding day).

Last month, David’s daughter Lesley, who lives in Norwich and is pictured here with her parents, spoke about the frustration with the stop-start process, telling MailOnline: “I’m just shocked and stunned. We are devastated and just don’t know how this happened.

Mr Hunter, a former British miner, said after a court hearing in September that Janice was diagnosed with cancer in 2016 and after watching her sister die of the disease she “knew what was to come”.

He said: “Not only was she my wife, she was my best friend. It’s like a black hole.

“Janice’s sister had died of leukemia and she saw what was to come.”

Mr Hunter has told police there was a pact between him and his wife and that after her death he attempted suicide but was found after relatives alerted police.

Paramedic Kleovoulos Kleovoulu told the court that when he arrived he noticed packets of pills in the house which “were all taken away”.

When asked by prosecutor Andreas Hadjikyrou about David’s mental state, he said it was “not” his job to “diagnose a person’s mental state.”

David added how his spirits were kept up by a British cellmate he identified as Owen Williams, 28, of Southampton.

He said: “I’d rather not say what he’s up to, but he kept my spirits up. He helps me and I help him, really by laughing. He’s the one that really kept me going.

When asked by MailOnline how he spent Christmas, he replied: “It was like any other day so I didn’t mind.”

He added: “I’m treated fairly and with respect and everyone has been good to me so I can’t complain. I just want it to be over so I can move on and mourn, I want to stay in Cyprus. My wife died here and I want to stay here.’

Last month, David’s daughter Lesley, who lives in Norwich, spoke about the frustration with the stop-start process, telling MailOnline: “I’m just shocked and stunned. We are devastated and just don’t know how this happened.’

The family have set up a funding page to pay for defense costs, raising just over £28,000. If found guilty, he faces life imprisonment

Sitting in court today, Mr Hunter revealed how he had asked officials at Nicosia Prison (file picture) if he could attend church last month to commemorate his wife’s death on December 18, 2021

She added: “Our side has always acted in good faith and we genuinely believed we had reached an agreement, so it seems needlessly cruel to have pulled the rug so suddenly.

“It’s a broken family here, so this process has to be about more than just earning points. If you are genuinely interested in justice, you may wish to consider my thoughts and feelings.”

After the paramedic finished his testimony, there was tension when he revealed he was calling his closest witness, Dr. Nectarios Sidiropoulos, could not call as he was a busy GP and was ‘unavailable all week’ warrant’.

He added: “There are many doctors in Paphos, he’s coming here now” before dropping the case so he could be contacted.

When the court resumed a few minutes later, the prosecutor confirmed that Dr. Sidiropoulos would be available on Wednesday and the trial was adjourned until then.

Cyprus is an Orthodox Christian country where euthanasia is banned, although MPs are considering discussing a law allowing it in extreme cases.

The family have set up a funding page to pay for defense costs, raising just over £28,000. If found guilty, he faces life imprisonment.