Mr Brown is due to publish a report today proposing an elected alternative called the Assembly of Nations and Regions along with anti-corruption measures. But it comes amid reports that Labor leader Sir Keir Starmer may be reconsidering his party’s plans for the Lords.

The party can now commit itself in its election program to only discussing reforms. The move will infuriate Mr Brown, who has been working on the Labor Party-commissioned report since 2020.

He firmly believes that change is needed and said: “The current House of Lords is unjustifiable. With very few exceptions, every second chamber in the world is relatively small, mostly smaller than the first chamber. We now have a House of Lords with 830 members. This is compared to the US Senate, which has 100 members to represent 300 million people.’ 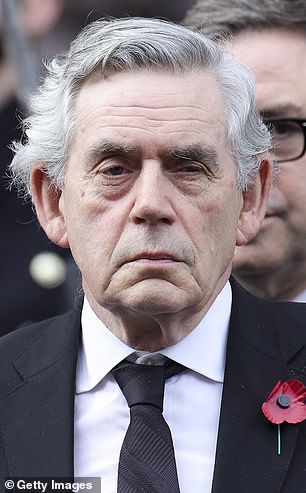 Gordon Brown (left) is due to publish a report today proposing an elected alternative called the Assembly of Nations and Regions and measures to fight corruption. But it comes amid reports that Labor leader Sir Keir Starmer (right) may reconsider his party’s plans for the Lords

He added that the Lords reform issue “will come to a head again when Boris Johnson has a roll of honor to resign”.

Alongside the abolition of the House of Lords, Mr Brown said a “new anti-corruption agency will be established under Labour”, with the Integrity and Ethics Committee being set up to replace existing “ad hoc bodies”.

Mr Brown’s report also proposes the establishment of a citizens’ jury to oversee the system and determine whether “enforcement is being done to the satisfaction of the public”.

The former Prime Minister insisted there would be a ban on second jobs for MPs if Labor wins the next election, although he pointed out there could be an exception to this for MPs who have to work to develop their professional qualifications such as doctors and… maintain attorneys.

That includes Sir Geoffrey Cox, who as a barrister earns hundreds of thousands of pounds on top of his MP’s salary.

Mr Brown added: “People’s criticism of Westminster, Whitehall is very strong and changes have to be important to sort that out.”

He insisted that the House of Lords was “a symbol of that” and claimed there was a sense that many colleagues were assigned roles there “simply because they were friends with the Conservative Party and not because of their contribution to public policy “.

Sir Keir Starmer told the Sunday Times: “Whether it is the reforms in this report or more generally, it will realistically take Labor more than one term to transform our country.”

He added that reflections on “when and how this will be implemented” would come after Monday when the report is released.

https://www.dailymail.co.uk/news/article-11501705/Brown-blasts-House-Lords-indefensible-Starmer-rumoured-rethink-scrapping-upper-chamber.html?ns_mchannel=rss&ns_campaign=1490&ito=1490 Brown calls the House of Lords “unsustainable” as Starmer is rumored to be considering scrapping the upper chamber