Winning teams always find a way. Burnley have been irrepressible on their long march back to the Premier League this season and promotion already seems a certainty.

Vincent Kompany’s side were 68 minutes behind West Brom here, but at no point did they feel that a first home defeat of the season was in sight.

The Clarets dominated the ball, ran all the way and were saddened to see various penalty requests denied before Nathan Tella scored the inevitable equalizer with 15 minutes to go. 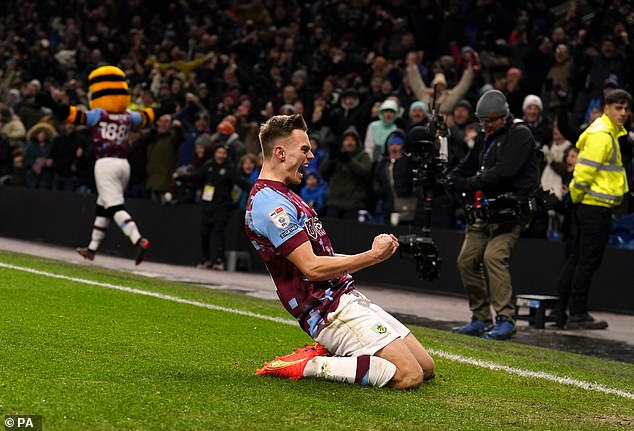 And when Burnley were awarded a free-kick on the edge of the West Brom penalty area with two minutes remaining, Scott Twine rolled the ball deliciously into the top corner.

It was his first goal for the club – talk about perfect timing. Chaos reigned at Turf Moor when the ball kissed the back of the net. This was a big test and her team refused to be thrown out of step.

West Brom had taken an early lead from Darnell Furlong’s header but, if anything, it proved too early.

83 minutes is an awfully long time to come up against a team with as much attacking talent as Burnley, a team programmed to keep the ball at all costs.

So while Carlos Corberan’s Baggies were about to have a revival and make the playoffs, Burnley proved themselves on a whole different level.

Despite Sheffield United beating Hull, the Clarets maintain their five-point lead at the top. More importantly, their lead over Watford in third place is now a mighty 19 points.

Catch them if you can – ascension will indeed be a matter of when, not if, very soon indeed.

Although Burnley are dogged for an immediate return to the Premier League, West Brom arrived in sensational form and no doubt assessed their chances.

They got off to a perfect start after seven minutes. Burnley ignored the warning signs in John Swift’s first corner and Daryl Dike almost found the net.

Seconds later, another tempting Swift delivery was answered forcefully by Furlong, who shoved Charlie Taylor out of the way only to steal space for his header in the six-yard box.

Dominating possession is a Burnley trademark under Kompany, but content with their early advantage, the Baggies were more than happy to let them have the ball.

Faced with a well organized defence, Burnley struggled to carve out any reasonable opportunities.

However, the Clarets pulled out through Nathan Tella with 15 minutes left

One of their clearest first-half chances came from a West Brom defender, with Erik Pieters grateful to his goalkeeper Alex Palmer and the post to prevent his misguided release.

West Brom threatened on the break and they had the ball back in the net only for Okay Yokuslu, who was penalized for a foul on Burnley keeper Arijanet Muric, who fumbled in his goal.

But the visitors clung on as the first half drew to a close as Burnley turned the screw. Barnes found the net and turned Ian Maatsen’s drive home but was slightly offside.

The striker then crashed the bar with a first-time shot after another good throw-in from Zaroury.

And Gillett didn’t endear himself to the locals by refusing another penalty – correct – when Tella went down under light contact from Furlong.

He walked away at the break with chants of “You’re not fit to referee” ringing in his ears.

The hosts had to save another penalty a few minutes into the second half when Zaroury’s cross went up and caught Jayson Molumby in the arm, not giving him much time to react.

Kompany turned to his bench and threw for Jay Rodriguez and Manuel Benson to ramp up the attack. From Benson’s low cross, Brownhill was unable to deflect the ball home and West Brom increasingly held on.

Benson twisted a volley wide after Pieters blocked Tella’s attempt just in front of his keeper.

But West Brom couldn’t last much longer. Tella was bounced over the top by Zaroury’s ball and had the pace to clear the box. His finish was inch-perfect, under Palmer and into the far corner. It had come.

Burnley turned to business to win it. Taylor’s powerful point-blank volley was blocked.

But when Jed Wallace tripped Josh Cullen right on the edge of the box, Twine, right off the bench, delivered the goods.

https://www.dailymail.co.uk/sport/football/article-11659683/Burnley-2-1-West-Brom-Nathan-Tella-substitute-Scott-Twine-turn-Clarets.html?ns_mchannel=rss&ns_campaign=1490&ito=1490 Burnley 2-1 West Brom: Nathan Tella and substitute Scott Twine turn it around for the Clarets

How to watch Xbox and Bethesda Developer Direct: platforms, timings