“Cannibal cut off his aunt’s head and used it to make pepper soup in Nigeria… and just stuck in when relatives caught him.”

A suspected cannibal has been arrested in Nigeria after he allegedly cut off his aunt’s head and used it to make paprika soup.

Jeremiah Ode, 45, is said to have killed his uncle’s wife, Priscilla, 65, and chopped off her head with a machete on their farm in Oju, southern Benue state.

Ode was then making pepper soup with Priscilla’s severed head and eating a steaming bowl of it when he was caught by relatives on August 19, Nigeria’s Daily Post reports.

Ode was arrested and appeared before the Makurdi District Court on charges of cannibalism. 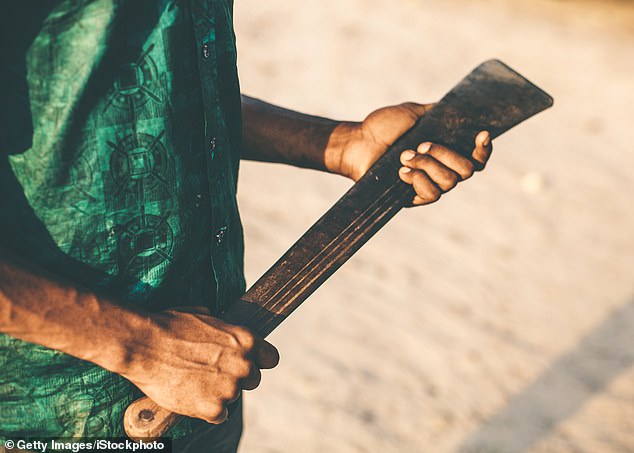 Silas Igari from Oju reported Ode to the police, claiming that he went to his uncle’s farm where Priscilla worked before killing her with a machete.

After beheading Priscilla’s head, Ode, known in the community to be mentally deranged, used it to make pepper soup.

Locals said Priscilla’s family went out looking for her after she failed to return home from the farm – only to find Ode eating her head.

Ode reportedly told police that he and Priscilla fought each other with their machetes before overpowering and killing her.

Jeremiah Ode, 45, is said to have killed his uncle’s wife, Priscilla, 65, and chopped off her head with a machete on their farm in Oju, southern Benue state

Nigerian newspaper Stateflash reported: “Police considered the story too ordinary to be that of a lunatic and therefore decided to prosecute him.

“Although the prosecutor informed the court that the defendant had confessed to having committed the crime, no plea was offered due to lack of jurisdiction.”

The Chief Magistrate, Regina Alagh, ordered Ode to be taken to the Federal Correctional Center, Makurdi.

The accused has since pleaded guilty to the charges in court, local reports claim.

The case was reportedly adjourned until November 11 for legal advice by the State Department of Justice.

https://www.dailymail.co.uk/news/article-11160585/Cannibal-cut-aunts-head-used-make-pepper-soup-Nigeria.html?ns_mchannel=rss&ns_campaign=1490&ito=1490 “Cannibal cut off his aunt’s head and made pepper soup out of it in Nigeria”